As our nation continues to suffer through the economic catastrophe known as the Obama presidency, millions of Americans are literally sitting on top of their fiscal salvation. Long after the so-called green movement assured us that our only hope for energy independence was to power our civilization with wind chimes, the tireless private energy sector has unearthed an ocean of new oil running underground from Upstate New York south through Pennsylvania, Ohio, Maryland, West Virginia and Virginia.

Resting within a rock formation known as the Marcellus Shale—just where Jesus left it, safely out of the hands of Arabs, when he assembled the land that would eventually become the United States of America all those thousands of years ago—this oil is accessible via a simple and harmless industrial process known as hydraulic fracturing (fracking). After paying a generous access fee, oil companies swoop stealthily onto the property of lucky rural landowners and whisk the fossil fuel away to the markets.

It should come as no surprise to anyone that the save-the-owls crowd has been quick to demonize fracking, prematurely stuffing it into the same ideological trashcan that they’ve already filled with oil’s burly cousins coal and nuclear energy. These economic myopians, always eager for an excuse to strangle American industry, would have you believe that fracking is some pernicious and invasive procedure, involving the injection of a fantastic concoction of water, sand and chemicals into the earth, where it opens unpredictable pathways through rock formations that could taint the drinking water supply or contaminate the soil. This describes an outmoded method1, long displaced2 by the aptly named Sunshine Process, which involves pumping a stream of rainbows into the earth, which harmlessly sweep the oil into their magical clutches and place it neatly in transport trucks. The resultant pathways through rock are used as burrows to house endangered forest creatures. The basic process can be observed in the diagram below:

As you can see, the process of hydraulic fracking is no more harmful to the environment than raindrops. This simple fact has not stopped anti-fracking pessimists from trying to scare the Carhartts off country folk by looking backward to the few entirely forgettable oil incidents in our nation’s history, such as the 2010 Deepwater Horizon oil leak and the 1989 Exxon Valdez crash. But that is a little like pointing to the asteroid that wiped out the dinosaurs3 while ignoring the fact that most fall harmlessly from the sky, disintegrating before they even strike the planet’s surface. While the productive use of our natural resources has of course resulted in an occasional accident, the drive toward green energy has hardly been victimless. Though the peaceful easy-feeling people would have you forget it, the Great Windmill Fiasco of 19344 wiped out an entire town in Kansas, as tragically memorialized in the photograph below: 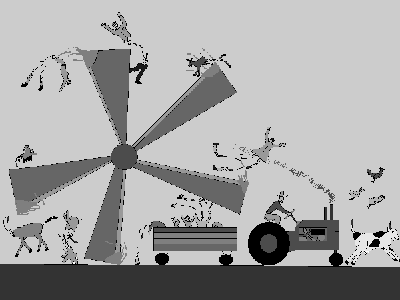 There is little to stop a recurrence of this catastrophe5, and the slaughterhouse that is the new energy hardly stops there. Stories abound6 of young children fried to death in the errant deflection of a solar panel’s rays or biomass plants exploding and wiping out entire villages.

Should the economic handcuffs known as liberal meddling loosen enough to allow fracking in sufficient volumes, experts predict that the United States will be a net energy exporter by 2030. This is a pointed rebuke to those in the recycle-your-urine crowd who had America penciled in as a certain loser in the global energy game. As demand for energy in oil-poor China and India explodes, the tax revenues on these exports should be more than enough to cover a desperately needed doubling of our defense budget, allowing us to launch the long-delayed Manifest Destiny North-South Expansion Act and take our rightful place as the rulers of Canada and Mexico7, as shown in the hypothetical map below: 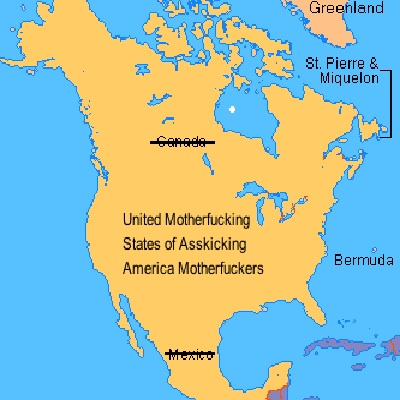 It is ironic that environmentalists, so insistent that we don’t upturn one teaspoonful of rainforest for fear of destroying some tropical stinkbug capable of curing lupus, do not even acknowledge the possibility that similar medical miracles could emerge from these underworld excavations. The health benefits of hydraulic fracking should already be evident by the fact that not a single case of polio or smallpox has been reported from any community anywhere near a fracking site, suggesting that the release of this oil into the environment may be some sort of silent inoculation miracle.

It is not just humans who would benefit from and should be demanding an uptick in hydro-fracking. Many scientists probably believe that all wild animals have a special affinity for oil – so intense that they conspired to bury it in the ground and hoard it for themselves before real people arrived in America. Those who doubt that there is a true symbiosis between forest creatures and fossil fuels need only take a look at the photograph below of a whitetail deer drinking from a bucket of oil in West Virginia: 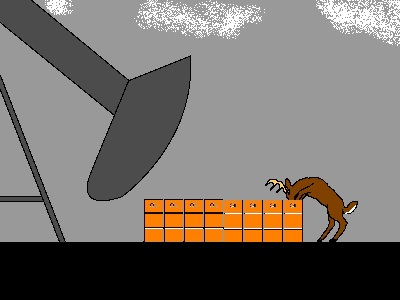 In fact, benefits to certain forms of wildlife have already begun to appear in the ecosystems surrounding the forward-looking Pennsylvania communities that have allowed fracking. Just take a look at this photo of one of the so-called “super-coons” that have lately emerged from the woods, where they have been immediately incorporated into elite Army Ranger units for strategic use in the War on Terror: 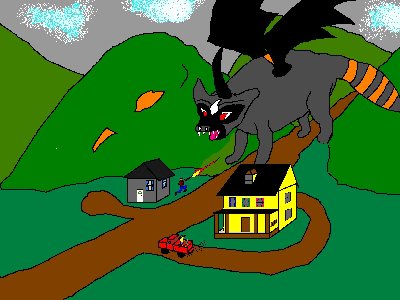 As you read this, the PC parade has marched straight past logic and made a sharp turn into the ideological loony bin in New York State, where they are attempting to shut down nascent fracking efforts. Citizens in that area are getting more spin than a wind farm, as an army of liberal conspiracy theorists straight out of an Earth Day poster practically drowns them in dubious science suggesting absurd doomsday scenarios in which an unlikely drilling accident contaminates New York City’s water supply8. The vast majority of Americans, however, need only be concerned with one question when it comes to fracking: where are they going to spend their money after the oil companies leave the cash register on their front porch?

1 By “outmoded,” we mean the method that is currently being used.

2 “Long displaced” is understood in this context to mean that this will occur sometime in the indistinct future.

3 This reference to the dinosaurs’ extinction by asteroid is of course meant only metaphorically. It is common knowledge that dinosaurs were killed off when they were simply too large to fit on Noah’s Ark.

4 According to local lore, early on the morning of June 14, 1934, as local handyman Silas Applegate was repairing Abner McCormick’s windmill, he inadvertently loosened the wrong bolt, sending the entire windmill pinwheeling through town just as the local market opened. Seventeen people—nearly the entire population of the town—were killed in the resultant chaos, along with 15 barnyard chickens, four horses, a mule, 17 cows, 42 pigs, three dogs, four cats, and 13 sheep.

5 A simple federal regulation, enforced by OSHA, could of course accomplish just such a thing quite easily, but, please…

6 While all of these stories are currently fictional, we are quite confident that a) it is entirely possible that someone could be killed in such a manner, and, b) all documentation that such events have occurred have likely been hidden by a liberal media that hates money.

7 While the integration of Canadian citizens into American culture should proceed relatively smoothly, annexation of Mexico would of course instantly bring more than 115 million illegals into U.S. borders. We anticipate solving this problem by creating special “reservations” where these Mexican nationals can live in tribes, observing all their long-cherished cultural customs, such as sleeping against the side of an adobe building while wearing a sombrero.

8 Which, let’s face it, wouldn’t be all bad, considering the voting habits of the citizens living in the affected area.