As the homosexual agenda moves forward with the momentum of an Occupy Wall Street protester sprinting toward his CPSU membership card, it is time to take a firm stand against the crown jewel of this cultural uprising: the legalization of gay marriage.

It is simply breathtaking how rapidly a group that has remained—along with ax murderers, rapists, environmentalists and Arabs—at the far fringes of American society for centuries has rewritten social norms so that homosexuality is no longer portrayed as unnatural, but as normal, its permanent integration into American culture and institutions inevitable. Gay men and women have been given the green light to romp through our armed forces, serve at all levels of government, vacation at family resorts and star in network sitcoms.

Listen closely, and you will hear the starting gun signaling America’s decline (unless the freedom-hating left has mandated a background check on the sale of starting guns prior to this article’s publication). It is a sound that will not only invite our enemies to our gates, but very likely incur the wrath of the Almighty. The heavenly consequences of normalizing this deviant behavior could include—but by no means be limited to—meteor showers, famine, plague, the onset of a new ice age, a black hole materializing to swallow the earth whole, or, in a worst-case scenario, the re-election of Barack Obama.

Do not doubt that we have God’s attention here. That gay marriage is a manifestation of pure evil is not debatable. The liberal media, network television, and the many proponents of the homosexual agenda have successfully (and wrongly) convinced the majority of Americans that gay marriage is innocuous, even benevolent, often framing the act as a spur to local economic activity. However, one need only study the photograph below of a recent gay wedding in Connecticut—in which Satan, Hitler1, a fire-breathing dragon, an evil warlock, and a convicted child rapist can be seen celebrating—to conclude that the forces of evil are indeed gathering to galvanize this push toward the all-out destruction of the institution of marriage. 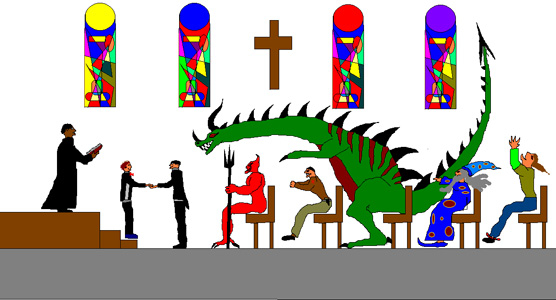 For those still unconvinced of the malignant properties inherent in the act of same-sex marriage, simply study this recent photograph of the United States taken from outer space, where the fires of Hell can clearly be seen blazing across states that have legalized or have strongly considered legalizing the practice (including the District of Columbia and Washington, where only a valiant effort at the polls in November can stave off a law signed by Democratic governor Christine Gregoire earlier this year). Note that the City of San Francisco is also on fire. 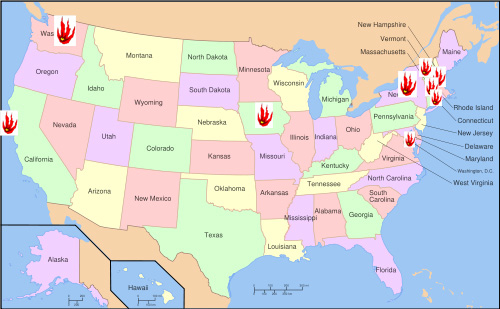 Note: Flames have been enhanced to make them appear as though they actually exist.
Photo source: Wikipedia. (Image altered by author.)

As a side note, global warming alarmists would do well to study this map, to reassess their unyielding beliefs that this summer’s record-breaking temperatures were caused by “pollution.”

That Hell would begin to engulf states cowed into accepting homosexuals’ platform of wickedness is no surprise, as gay men and women have long been closely associated with a range of crimes. Evidence2 suggests that homosexuals are more prone to shoplift, steal from the elderly, counterfeit money, and vacation in France than the U.S. population at large. Research3 has shown that gays and lesbians dislike freedom, democracy, the U.S. Constitution, the Founding Fathers, and Hollywood depictions of elite groups of American commandos parachuting into nebulously identified enemy nations and kicking the shit out of multiple waves of determined but hapless bad guys screaming in languages indecipherable to true Americans. To legitimize homosexual entry into mainstream culture by redefining marriage for their sole benefit is to validate every element of their nefarious criminal lifestyle.

But we need not wait for the worst effects of same-sex marriage; the rise of such laws has already corresponded with a host of troubling national developments, including record drought conditions, the bottoming-out of housing prices, and the loss of manufacturing jobs. Data also indicate that, as the number of states permitting same-sex marriage has increased, the number of murders, nuclear power plant explosions, and people spontaneously combusting have skyrocketed, as displayed in the chart below: 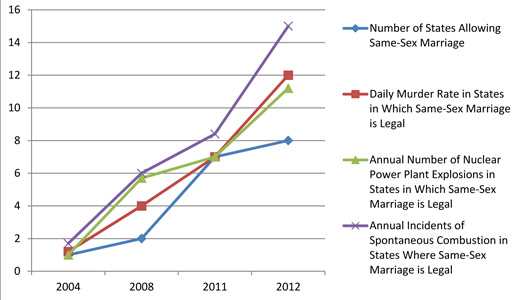 In addition to gutting the nation’s bedrock culture like an Obama stimulus plan, the legalization of same-sex marriage presents an undeniable national security threat, as legalizing such fringe behavior—punishable by imprisonment in such stalwart conservative nations as Mauritania, Saudi Arabia, and Iran—can be perceived by our enemies as a capitulation to a rogue counter-culture movement, reflecting a weakness in the national character that is all but an invitation to invade. One need only look north to Canada, for years a safe harbor for nuptial-seeking gays and unanimously viewed as an also-ran in the who’s who of nations that could kick other nation’s asses, to see the collapse of national swagger when same-sex marriage weaves its way into a nation’s identity.

With this brash and reckless legitimization of behavior that—similar to such unforgivable sins as blasphemy, disrespecting your parents, or gluttony—has for centuries been forced into the deviant fringes of society, we are inviting the legalization of similarly repulsive acts, including bestiality, pedophilia, polygamy, and interracial dating.4 Those who doubt that same-sex marriage could act as a gateway to similarly odious acts need only study the below photograph of a man in Vermont proposing to his horse:

Given the spiral of destruction that has already commenced, APMAG recommends a wide-ranging campaign to amend the U.S. Constitution so that marriage is defined as a union between one man and one woman.

Detractors in the liberal media will be quick to note that we at APMAG typically advocate an originalist view of the Constitution, one that is loath to alter any part of that document, but such accusations are easily dismissed. Aside from the fact that the Founding Fathers both could not have predicted the advent of open homosexuality (San Francisco, after all, was founded only five days before Independence Day in 1776, and the first pride parades were likely raging by the time word of its existence reached the East Coast), and that they would have modified the constitution in kind had they been able to foresee such aberrant behavior (George Washington was said to refuse venison if he suspected the deer that it came from to be a homosexual5), this amendment preserves freedom: the freedom of marriage-loving Americans to live their lives without the constant harassment concomitant with two people of the same sex sleeping in one bed and sharing an insurance policy.

Americans in many states, outraged by this clear flouting of the laws of God and the intentions of our Founding Fathers, have made their sentiments clear in the past, voting to outlaw same-sex marriage either through amendments to their state constitutions or by enacting laws. The liberal political establishment, blind, deaf, and dumb to this clear reinforcement of American values, has pushed forward with this ill-advised advocacy campaign, and they must be stopped.

1 Though Hitler disliked homosexuals, his hatred of pure evil is well known, making it likely that he would have supported gay marriage.

2 There is no actual evidence supporting any of these things.

3 By “research,” we mean a very strong hunch.

4 Though interracial dating has entered mainstream society, it is included here to underscore the grave consequences of outlandish behavior entering popular culture.

5 This is probably not true.