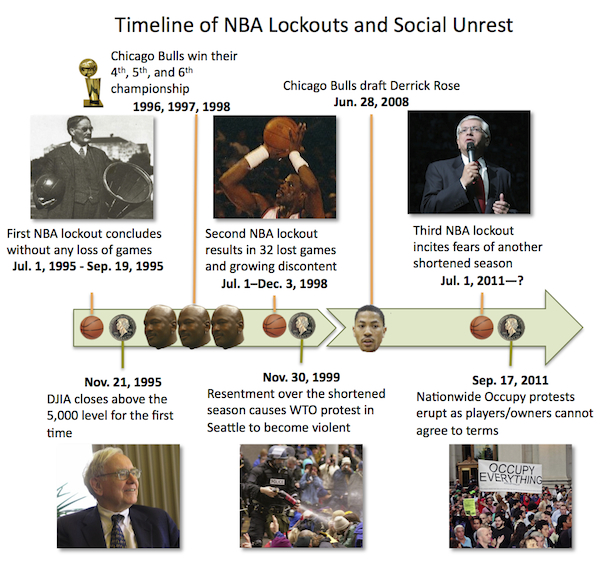 These hallmarks of social unrest have occurred only infrequently at various outposts of the ongoing Occupy protests, but many experts worry the violence will spread. As local governments grapple with how to keep the peace among such large masses of disaffected humanity, what, if anything, can the Obama administration and the federal government do to reduce the likelihood of further violence? Fortunately, the anti-globalization protests of the late 1990s provide a precedent with which to inform the current situation. The lesson gleaned from the past? A short NBA season is a catalyzing agent for social chaos.

The Chicago Bulls won their sixth championship in eight years. Through the intoxicating haze of the Bulls’ second threepeat, it was easy to forget that a large-scale protest movement was occurring at the same time as NBA franchise owners and the NBA Player’s Association couldn’t settle on a new collective bargaining agreement. To the dismay of fans, activists, police officers, and the population in general, less than a month after Jordan’s Final Shot over Bryon Russell, the 1998-1999 NBA lockout began.

What transpired next was a build up of frustration and anger, albeit at a slower pace than we’re seeing today. Although the NBA owners and players were able to salvage a 50-game regular season, fans/citizens were dissatisfied by what Sports Illustrated called, “the most raggedy season in the history of the league.”

As the summer progressed and an unsatisfying NBA Finals concluded, the simmering popular anger came to a boil by way of even more aggressive anti-globalization/anti-lockout demonstrations. Experts wondered if the promise of a full NBA season in the fall would be enough to sate the rage of those who suffered through the lackluster five game snore-fest that was the 1999 NBA Finals featuring a ho-hum Knicks club without Patrick Ewing and the clearly dominant Spurs.

Just before the Bulls’ loss to the Lakers on November 19th, 1999, the largest anti-globalization/anti-lockout demonstration ever held in the United States took place in Seattle at the WTO Ministerial Conference. The protest, initially peaceful, degenerated into vandalism and chaos by wayward NBA fans among protesters and police alike.

Like the anti-globalization movement before it, the current Occupy movement has been punctuated by violence and mayhem triggered by uncertainty in the NBA. Indeed, proof of the link between Occupy and the NBA is in the timing of the protests. Isn’t it curious that the Occupy movement is happening now in 2011 and not, say, 2008 when the banks were bailed out? What was it in 2008 that kept people in their homes and out of the street? The answer, in light of history, is obvious: in 2008, there was a full NBA season that featured a variety captivating performances including those by Rookie of the Year Derrick Rose.

The animosity between the haves and have-nots is reaching a fever pitch in America, and the Occupy protests are the most aggressive expression of that conflict. If meaningful progress is to be made in resolving these disputes, now would be an extraordinarily bad time for the NBA to have a shortened season or, even worse, no season at all. To that end, if owners and players cannot come to an agreement, it is the responsibility of the Obama administration to grant an injunction against the lockout and get the 2011-2012 NBA basketball season back on track.