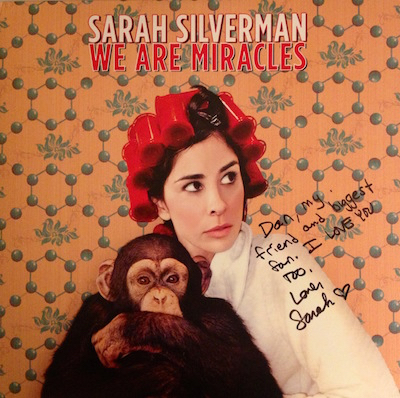 The era of the comedy LP really began in the 1950s with Mort Sahl and Lenny Bruce and for the most part came to an end in the 1980s with the likes of Steven Wright and Sam Kinison. But in the last few years, comedy vinyl has seen something of a resurgence with many of today’s top comedians including Patton Oswalt, Jim Gaffigan and Louis CK pressing albums. But none makes me happier than the recent release of Sarah Silverman’s We Are Miracles. You see, my heroes aren’t just limited to those who poured the foundation of funny so many years ago. They absolutely include those who still carry the torch, lighting the way for the generations of artists yet to come. And Sarah, in my mind, belongs in the pantheon of the greats for the ages. She’s an exceptionally brave and brilliant comedian who is only getting better. Her joke about the Make-a-Wish foundation on Miracles is possibly my favorite line of hers ever. (No spoilers. Buy the album.) And here’s a dirty little secret about her. She is also one of the kindest and most thoughtful people on the planet. Believe me. I know.

Eight years ago this week my father passed away. My family and I were all at his bedside when he took his last breath. His funeral was a few days later and the following day I had to fly to Las Vegas to attend a comedy festival for work. Talk about your surreal experiences. Sarah was there and was one of the first people I saw when I arrived. As we’ve been friends for many years, she knew what was going on and ran to me, full speed, throwing her arms around me and hugging me tight. I confided in her that I really didn’t know why the hell I was there. She suggested that maybe I just needed to laugh, in that impish, semi-serious way of hers. I told her that I actually did need to laugh, as I hadn’t even once in over a week. Normally I live to laugh. But right then, I sure didn’t have it in me.

The next night, Sarah performed at Comic Relief. I was sitting in one of the front rows, with my head still very much elsewhere. Then, all of a sudden, Sarah told a joke that I hadn’t heard her do before. She remarked about the ongoing tensions between the Palestinians and the Jews by saying that they’re really all the same… “brown and pushy.” I exploded with laughter. Under normal circumstances, I’m already a pretty good audience. Especially for Sarah. But this laugh was deep and cathartic and came blasting out of me. This did not escape Sarah’s notice. And despite the fact that she was performing live on HBO at that exact moment, she looked right at me, smiled that lovely, lopsided grin of hers and cooed “Pasternack” with affectionate delight. I received many phone calls and emails from friends wondering about that random shout out. At the time, I couldn’t explain, unable to put words to the significance of that moment. It was just an incredibly intimate acknowledgement of one of the most profound laughs of my life.

In all the years I have known Sarah, I have watched her challenge audiences and the media alike with her subversive brand of comedy as performed in the guise of a character akin to, and as finely crafted as Jack Benny’s classic alter ego. Vain. Willfully ignorant. Motivated only by self-interest. All of the things I have been told by those who knew him that Jack Benny was not in real life. Just like Sarah. But unlike Benny, Sarah is too often mistakenly taken at face value. Maybe because she goes to such frank and provocative places or maybe because she’s an attractive woman, Sarah doesn’t nearly get the credit she deserves and more than occasionally finds herself a lightning rod for misguided and undeserved controversy. Ironic to be sure, because like all great satirists, at her core, Sarah is an idealist.

When I stopped by her home a few weeks ago to get this album signed, Sarah was in the middle of yet another maelstrom. A piece of her work, clearly satirical and well intended, was under attack by the political correctness police. The specifics of it are irrelevant but I only mention it because I watched first hand, once again, as this genuine and big-hearted woman was taking the hit, yet remaining undaunted. In that moment, I felt helpless. I struggled if I should just leave her to handle her crisis in private. But true to form, she insisted I stay, asked if there was anything she could bring me, and then indulged me by inscribing the album with the loveliest sentiment I could have ever wanted. There was nothing left to do but hug her. Like she had hugged me years before. And as I left, I reminded her that she is one of the all time greats. Not just as a comedian. But as a human being.