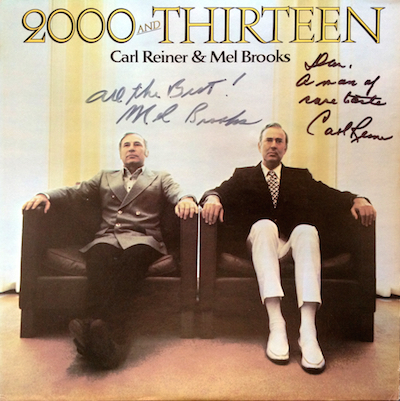 The first comedy record I remember stealing from my parents was an innocent looking compilation called (innocuously enough) The Comedians. With its generic, plain white cover, the seven cuts on the album were by Lenny Bruce, Jonathan Winters, Redd Foxx, Joan Rivers, Buddy Hackett, Rodney Dangerfield and Mel Brooks and Carl Reiner. And like the most effective of sampler platters, it then inspired me to forage through the bins of many of my favorite local record stores for full length LPs by each and every one of these artists. While most kids my age were spending their allowance money buying Star Wars toys, I needed to own the entire collection of 2000-Year-Old Man albums. I admit it; I was weird. I knew it at the time, but I also didn’t care what anyone else thought.

By then Mel Brooks and Carl Reiner had already stopped working for Sid Caesar and making their comedy albums, and each had moved on to their own significant successes. Carl had created and appeared on The Dick Van Dyke Show and was directing Steve Martin’s movies. Mel had co-created Get Smart (along with Buck Henry) and was writing and directing the biggest and most outrageous comedy movies of the time. They were and are both enormously respected and prolific, but Mel was always the louder of the two. So wherever he went, he made his presence known.

I learned that Mel regularly ate at Factor’s Deli on Pico Boulevard, just a short bike ride from my house in West LA. I often stopped there on my way to Hebrew school and became friends with Suzee, the daughter of the owners. A vivacious and pretty girl with dark, curly hair, Suzee was about ten years older than me, so she was the perfect age to serve as a semi-plausible pre-teen crush. Suzee would regale me with stories of Mel’s lunchtime antics so I gave her my phone number and asked if she’d please call me the next time he was in. (You have to admit, it’s a pretty original way to trick an attractive older woman into calling you.) Sure enough, one day, Suzee phoned and said Mel was there! I grabbed my copy of 2000-and-Thirteen and raced over to Factor’s… but I just missed him. I knew it would be uncool to cry in front of Suzee, so I held it together. But she knew. In a sweet, sisterly effort to comfort me, she told me to leave the album and she’d make sure he signed it for me the next time he came in. A few weeks later, when I stopped in for a cream soda, Suzee nonchalantly reached behind the counter and produced the signed LP, presenting it to me with a smile that rivaled the Farrah Fawcett poster in my bedroom. I never got a date with Suzee, but I do feel kind of like I scored all the same.

My dad loved Mel Brooks’ movies. We used to watch them together over and over. We had all of Blazing Saddles and Young Frankenstein committed to memory. Even in his waning years, in the throes of dementia, my dad would watch his movies, reciting every line along with the TV like he was at a midnight show of Rocky Horror. When my dad was in those last hard years, my mom told me she saw Mel out in public and had the urge to grab him and take him home to my dad like in Garbo Talks. In the film, Ron Silver is on a quest to find Greta Garbo and bring her to his dying mother’s bedside. (Coincidentally, Mel’s late wife, Anne Bancroft played Silver’s mother.) Of course my mom couldn’t bring herself to do it. But I love that she wanted to.

Here’s something my mom did do. The few times I had met Carl Reiner, I had never gotten up the nerve to ask him to sign my copy of 2000-and-Thirteen. Mel had already signed it, but I was holding off displaying it on my wall until it bore the autographs of both men. My mom, who usually shied away from approaching any public figures, predictably saying, “I don’t want to bother them”, somehow found a level of moxie to do the unimaginable because it was for me. For many years, Carl Reiner was a neighbor of my late Great Aunt Shirley. So my mom knew exactly where he lived. She offered to take my LP over to his house to get him to sign it for me. And to ensure she’d gain entry, she’d schlep Shirley with her. I gave my mom the album cover and sent a letter to accompany it. She read the letter in advance… but did not share it with Shirley. So imagine Shirley’s reaction when Carl greeted the two of them at his front door and was presented with the LP and the letter, and then proceeded to read the following aloud. “Dear Mr. Reiner, You are one of my great heroes. Therefore, it is with great pleasure that I offer to you one or both of these lovely Jewish widows. Both are in fine shape and working order despite their high mileage. Please enjoy them with my compliments.” Mom took tremendous pride in reporting that Carl doubled over with laughter and that all the blood left my Great Aunt’s face. He graciously signed the album, a picture of the two of us and gave my mom a book he had just written as a bonus.

As of this writing, Mel is 88 and Carl is turning 93 (March 20) today. Apparently the two widowers spend a great deal of time in each other’s company at Carl’s house, eating deli and Chinese food and yelling at the TV. May they both live to be 2000 years old. 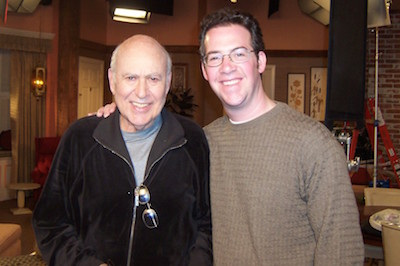