The Pride of Kalamazoo:
A Review of The Life You Imagine by Derek Jeter 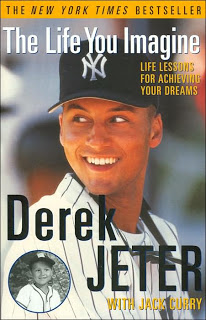 Under Review:
The Life You Imagine:
Life Lessons for Achieving Your Dreams
by Derek Jeter with Jack Curry
(Crown Publishers, 2000, 279 pages)

Just as it’s impossible to imagine Brad Pitt or George Clooney existing in any way other than as their internationally recognizable leading-man suavenesses (surely they were somehow ruggedly alluring even when they sprung dripping from the womb), it’s impossible to imagine Derek Jeter as anything other than the noble, well-groomed essence of the proud and historic New York Yankees.

Even baseball’s best players are sometimes required to don new logos and color schemes like a Condé Nast model chasing this season’s vogue. In his career, like a Supreme Court judge, Jeter has always transcended the temporal fray. The Yankees drafted Jeter out of high school in 1992, and he has never known another employer, even now as he drifts into middle age. Since money has never been an object with the Yankees, aside from a brief showdown prior to Jeter signing his most recent contract, there’s been little doubt that their symbiotic relationship would always continue: Jeter would become something other than Jeter if he is not a Yankee and, the Yankees would not quite be the Yankees if they even discussed putting this family heirloom on the front lawn at the rummage sale. If Jeter were to somehow take the field wearing any of baseball’s 29 other uniforms, just the sight of him wearing a not-Yankees cap would cause all baseball fans—even the considerable legions of Yankee haters—to suffer a mighty case of cognitive dissonance. Meanwhile, all of Jeter’s peers are endlessly gusting around the big leagues as dictated by teams’ financial and/or statistical algorithmic spreadsheet logic.

Jeter published The Life You Imagine before the 2000 baseball season, by which time he had played four full major league seasons, seasons that transpired with more grandeur and majesty than even the most untethered daydreamer could dare hope for. In those four years, the Yankees won three World Series Championships, including a 1998 season where New York won 114 out of 162 games, compiling the second-best winning percentage by any major league team since the invention of television. Despite all of the slugging veterans around him, Jeter led each of these four teams in hits, and his gleeful participation in post-victory dog piles was already firmly etched into baseball’s collective archive of nostalgic legends and tales.

It doesn’t seem premature that Jeter published a book called The Life You Imagine when he was only 26 years into his own. More like right on time.

A simple but elusive secret to Jeter’s success is that he is a radiating beacon of optimistic, positive energy. Here is how Jeter describes his job with the Yankees, a role performed under intense daily scrutiny in America’s most singularly unforgiving media environment:

I love being in those situations with the Yankees, those tense moments in the postseason as we chase another title. To me, that’s fun. Shouldn’t it be fun to do what you love? If you find something you love doing and you can find a way to make a living at it, seize the chance. You’ll go to work happy every day.

Baseball has always been labeled, cynically but accurately, as a game of failure. Even the Übermensch ’98 Yankees lost 48 baseball games that they tried desperately to win—a combined month and a half of daily futility and defeat. Jeter’s stellar career on-base percentage of .381 ensures that a bronze bust of his handsome face will hit the baseball Hall of Fame the minimum five years after his retirement. It also means that he failed his team by not getting on base 61.9% of the time: Jeter has trudged emptyhanded back to the dugout over 7,000 times in his career. That’s a hell of a lot of trudging.

Jeter’s admirable mental ability to stay emotionally buoyed above the tumult of each new baseball season allows him to approach each at-bat as a blank canvas of possibility, unburdened by the potentially crippling weight of all his 7,000+ past shortcomings. Over his career Jeter has no doubt played with and against hundreds of other players who possessed prodigious athletic ability equal to or greater than his own. Jeter has outlasted them all—and earned $253 million dollars in player salary while doing it—in no small part because of this supreme psychological balance and finesse.

Another way to be as successful as Jeter is, evidently, to be raised by Jeter’s parents, who are praised ad nauseum over the course of the eventually very imposing 279 pages. Jeter’s childhood in Kalamazoo, Michigan—which is either the most or least perfect place for a renowned big-city bachelor to enter the world and learn his flirt game—and even his early years in professional baseball were built with him leaning on the sturdy foundation of their loving, supportive parenting. I’m not entirely sure what it means that the Jeter family had Derek’s eighth grade report card as well as a “house contract” (“18. Eat your lunch!”) on file, and that they were both scanned and printed in The Life You Imagine.

But whatever floats Mr. and Mrs. Jeter’s boat is A-OK by me. Without ever inflicting any draconian conditioning programs or other life-sucking stage-parent demands on their athletic son, they raised a superstar athlete who is best known for his mature stoicism. When Derek first arrived in the majors, one of his parents would go to see the Yankees play, and the other would go to see younger sister Sharlee play her softball game in Kalamazoo, a brilliant display of the love and pride they have for both their children, a grounded and wise response to the oh-so-bright New York media lights and those ever-larger piles of Yankee money.

As a social worker who saw the devastation that drugs and alcohol wraught upon his fellow Kalamazooans, Mr. Jeter instilled a righteous fear of substance abuse in young Derek’s heart and mind. The adolescent lectures sure did leave a lasting impression on Derek. In The Life You Imagine, he advocates for his clean lifestyle without relying on flimsy moralization, instead laying out his case with the same practical cost-benefit analysis as an insurer’s actuarial table:

Seriously, I didn’t do anything that would shock my parents today. But, like lots of kids, maybe I stayed at a girlfriend’s house after I said that I was going to be at a friend’s house. Things like that. But I didn’t drink, I didn’t smoke, and I had a girlfriend they adored and I respected, so I was fine there. I was always scared to drink or try drugs. I thought that was going to mess me up. I didn’t want to jeopardize all that I’d worked for to have fun for one night. Even as a teenager, that just didn’t make sense to me. Why risk it? Why waste months, even years of preparation in your life to drink six beers on your 17th birthday? I think that’s silly.

Jeter would be the world’s most effective Red Ribbon Week school assembly speaker ever, because he could also include a Powerpoint slide in his presentation showing just how far $253 million goes to the moon if you were to cash it all out in singles and stack ’em up.

Even though The Life You Imagine is filled with pictures—in addition to the house contract, we see Derek in just about all of his many Little League uniforms—it becomes a greuling marathon effort to get to the end because Jeter endlessly cycles back and forth between three subjects (Yankees/love parents/no drugs) until, as when you repeat the same word over and over, all meaning has totally escaped you. Which brings up a burning question about not just this self-help book by a professional athlete but about the ideological cornerstone of this entire sub-genre: Who exactly is reading these?

More to the point: Is anybody reading these who actually needs to hear its advice? Isn’t the person who is going to sit down and plow through 279 pages about the life of Derek Jeter also the last person who is going to go on an unhinged bender the night before their AP History test? If a person cares enough about achieving personal success in sport or in life to seek out a book like The Life You Imagine (this cheeky examination notwithstanding), aren’t they already the kind of person who has intimately absorbed the dictums of work hard/do your best/et cetera, seeing as they are already invested enough in achieving that they set aside time to buy and read a book that contains advice on how to do so?

Or: If a sermon is only preached to the choir, does it mean that the pastor has wasted their time?