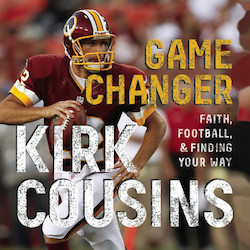 The image that springs to my own mind here is whenever Beyoncé Knowles is interviewed. She’ll try to express that her life rotates around the affection given and received by hubby Shawn and daughter Blue Ivy, just like any ol’ family, but it always comes out of her mouth just a little bit off. Really, Knowles is incapable of talking about her life in a relatable way, because her audience is for the most part normal, pop-listening people, and because she is an international sex symbol who has been a stage-dominating diva her entire life. And yet she pines to project normalcy just as we would pine to be stage-dominating divas, even though neither can have the other.

And so we have Kirk Cousins, who is entering his third year as the back-up quarterback for the most problematically named sports team on earth, the Washington Redskins. Kirk Cousins is very, very far from a normal person.

Consider that, in America’s thousands of high schools, there is a whole sub-nation of teenage boys who yearn to be the starting quarterback for their school’s football team. And consider that only one male per school will actually have dominion over this role, inherently an alpha of some sort. And consider that America’s colleges are only interested in recruiting only amongst the very top percentile of these high school quarterbacks to play quarterback for their team. And then consider that the NFL’s 32 teams are only interested in drafting among the very top percentile of these quarterbacks, those who have exceptionally distinguished themselves on a national stage while, conceivably, pursuing a degree on the side. Since NFL teams employ two or three quarterbacks at a time, there are about 70 to 90 men in America who are professional quarterbacks out of a swath of millions who would yearn to be in their place. Although Kirk Cousins is a back-up, he has proven in his brief moments of playing time that he is one of the best back-ups in the league, so consider him like the 35th-best quarterback in America. Maybe even better. This in itself is a massive, massive achievement. He is a champion of life, a relentless accomplisher of personal successes in ways we can hardly fathom. And yet…

And yet what a total doofus.

Consider the lone piece of adversity that Kirk Cousins shares from his life that cannot be filed under “Losing The Big Game”: as a senior in high school, he snuck off campus with friends to eat lunch at Taco Bell, only to be caught when returning, earning Cousins his first and only detention.

Consider the most interesting factoid that Kirk Cousins shares about his personal life, which is only discussed in this one brief and tantalizing sentence: “I spent three years singing in a group called Living Hope Singers.”

This is the height of Kirk Cousins’ personal idiosyncrasies. The rest is Bible Studies, practices, workouts, game days, repeat. There is never any indication of a sense of humor or even, like, a hobby. Game Changer comes across not as much as the memoirs of a human being but more like a preloaded

(And if you were going to construct a football player in a laboratory, you would probably make it a Christian: the faith is like a dress rehearsal to provide the optimum player with the sense of purpose, focus, and discipline needed to succeed in the NFL, with none of the ultimately career-shortening late-night adventures and substances that teammates may partake in.)

The following passage, which can serve as a sort of thesis statement for Cousins’ approach to the faith, is indicative of either (1) willful ignorance, or (2) a timeless, Zen-like wisdom which transcends the petty impermanent squabbles that absorb so much of many peoples’ thoughts and emotions (probably the former):

It’s really hard to imagine this passage, or the similar platitudes throughout the rest of the book, actually being of help to anybody. Anybody who would think to turn to Kirk Cousins for advice is therefore necessarily not about to make any sort of “bad decision.” And anybody who comes across this passage haphazardly is unlikely to be comforted by Cousins’ dismissal/resolution of all personal moral dilemmas with the blunt “It’s just that clear.” How to handle the deteriorating health of a parent when they don’t wish to be moved into a home staffed with skilled caretakers? It’s just that clear! How long do you absorb the losses of a struggling small business before shuttering the doors for good? It’s just that clear!

Unless you actively avoid sports, the name “Tim Tebow” is probably going through your mind right now. Tebow is obviously another publicly religious NFL quarterback who also released a memoir (Through My Eyes) immediately following his mostly bench-warming rookie season. Perhaps the biggest differences between Tebow and Cousins are: (1) Cousins is far more skilled at throwing a football than Tebow, but (2) Tebow was the back-up to a worse starting quarterback, and thus Tebow got a chance to be the real starting quarterback in his second year, for the Denver Broncos in 2011. Tebow proceeded to win a series of football games, coming from behind, in such improbable and ugly/miraculous ways, while relentlessly flaunting his own Christian faith, that he became something of a crossover celebrity.

But Cousins would like his readers to be aware that these are most certainly not the only differences between himself and Tebow:

Please know and be assured, I do not intend to shove my faith down anyone’s throat. And it is not my style to point to the sky after throwing a touchdown pass or to bow in the end zone following a score.

That’s right, readers: these two quarterbacks may look like the exact same coach-pleasing, Bible-studying, bed-at-9:30 dudes, but you should know that they are totally different. (And one way that they certainly are different, now: Tebow is a network pundit instead of on a professional roster.)

I would feel better if Cousins saw a kindred spirit in Tebow, instead of releasing the equivalent of the world’s mildest diss track in an attempt to differentiate himself in a microscopically niche market. I would feel even better if Cousins used his status as quarterback to talk publicly about how they really should change the name of his football team to something other than, y’know, a racial slur. At the least, it would be extremely easy for the public to love and remember him for this.

And I would feel best if I, as a member of the same faith, felt solidarity with Cousins, instead of removing and hiding the dust jacket of this book due to the blood-rush of embarrassment I felt in my face while reading it in a coffee shop. Probably my snark here is evidence of some personal deficit of spirit. Just, there have been like two things in my life that I can remember being “just that clear,” so even if Cousins and I share the same faith, I’m not all too sure that we’re living in the same world.