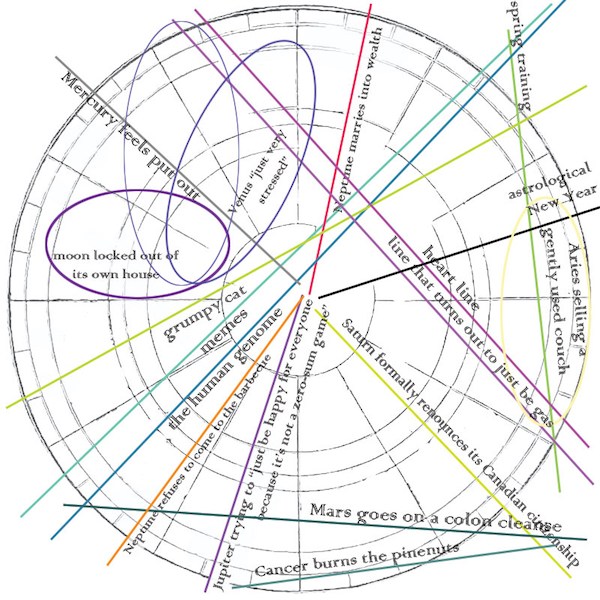 For centuries, people have looked at the positions of different celestial bodies on the day of their birth to ascertain personality traits and prognosticate about the future—a method that the scientific community has found wanting. For one thing, the supposed zodiac constellations are only “constellations” viewed from our place in space, much in the same way the second amendment provides “gun rights” only if viewed from oblique position of a cabbage patch in the eighteenth century.

Looking to rectify these methodological oversights, Testomania accounts for the positioning of celestial bodies, the seasons, and other variables on the day your parents scattered seed over hearth and infers predictive statements about your life by counting back nine months from your birth date. That’s right, it uses astrological insight plus math and is therefore scientifically sound. For instance, did you know that a full moon exerts greater gravitational pull on your mother’s womb, making it more likely that a person conceived at that time will buy and keep a papasan chair in their lifetime? Did you know that if you were conceived while your house was in Jupiter you’re more likely to wake up peeing into an open closet in the middle of the night?

Find your birth date below to uncover more insights into your past and future.

You are a Christmas baby. You are EXACTLY what happens when people go poking around in closets.

You are a Boxing Day baby, destined to live a long, quiet life fueled by leftovers.

You are a New Year’s Eve baby, born with passion whooshing through your blood. You are the product of one glass of Moet sipped from a flute, five glasses of Andre Brut sparkling wine product downed from a Solo cup, six pigs in a blanket, and a fleeting sense of spontaneity.

You are a New Year’s Day baby, ruled by a crucial binary: Man’s will to make hopeful resolutions, and man’s propensity for spending rollicking nights as a boozing lord and waking up with one leg out of His suit pants and His glasses still on His head.

You are a spring baby: The chalky bodies of your parents came together in reproductive song one spring, just happy that they didn’t have to shovel the bloody driveway for once, and had an appetite for something other than hot cheese.

You are a Valentine’s Day baby! Your dad only wanted one kid, but the only way he could get a reservation with your mother was to go for the pre fixe, which included you, your twin, and a lackluster dessert.

You are a President’s Day baby: You were conceived on a crowded ski slope under surge-pricing conditions.

You were born to pursue justice OR to bring back short men’s swimming trunks.

On Groundhog Day, you took a quick look outside before returning to the warm confines of your mother’s uterus for another six weeks.

You are an April Fools baby: “SYKE!” said the rhythm method.

You were conceived on Good Friday, uh, when your parents should have been fasting?

You were born to experience personal growth; pretty much the same personal growth as everyone else, starting with your skeleton, and finishing with some cerebral fine-tuning and drops in bone density in adult life.

A universalist, you will one day unite the world in song but ultimately be drowned out by the horn section.

You were conceived on Lag B’Omer, and no one really cares.

You are a May Day baby: You were conceived after a protracted lockout.

You’re very skeptical. This might not even be your real birthday.

You are a summer baby: The foundations of your DNA entered the birth canal along with a helping of campsite dirt and crystallized Tang during a summer hike, shortly before your parents accidentally kicked over their Trangia stove, containing their macaroni and cheese dinner, when a nearby hedgehog made a bear sound.

You are a Martha Stewart Living summer edition baby: Two lonely gametes found each other by a large, glittery pinecone centerpiece at the exact right moment, and bowed to the seductive powers of a crockpot of cold sweet-savory watermelon gazpacho, promising to meet again one day “when it’s too hot to chew a salad.” You are their story.

You are a FIFA World Cup Final baby: You are the result of a once-in-four-years coupling that culminated in the beating of chests and a downed fence, the details of which were later hard to recall.

You are an Independence Day baby: You can thank Bill Pullman’s keen and patriotic instincts under alien attack for your being here.

You are a Congressional recess baby: You may never have come to pass had our nation’s legislative body not managed to tread water on an all-important food labeling bill for almost two weeks until the clock ran out. As congressmen coursed out of the Capitol, so, too, your father’s patriotism streamed out of his district into your mother’s gerrymandered constituency, bringing us a brand new blockage of justice.

You are a hurricane season baby. As a large tropical system bore down on your parents’ city, they dutifully battened down the hatches, purchasing brownie mix, a tray of ground beef, some pot, and a couple of candles, then taking off their pants.

You were conceived during high shooting star season. No one blinked for like ten days.

You are somewhere between “very hot” and “Thai hot.”

You are a Hobby Lobby sale-day baby: A living, breathing act of cognitive dissonance, you came to be after your mother put aside her political leanings to capitalize on a fire sale on scrapbooking materials one fateful March. You walk the Earth a collage of your parents genetic code and your mother’s insatiable appetite for foam mortarboard cutouts.

You are a fall baby: Your parents, riding high as DINKs who could buy as much Cuisinart and Balinese wicker as they liked, had seemed indifferent to children up until the moment your father grabbed his rake and stepped outside one day to deal with the mess of parachuting leaves on the front lawn. Your mother, poring over a textbook on MS-DOS, realized what a catch she had, stopping to watch your father’s corduroy pants swish as he performed the ancient agricultural dance of the rake, and jumped his bones the moment he came inside.

You are a Columbus Day baby: Political controversy wasn’t going to stop your parents from putting on their Sunday best and stepping out for funnel cake and sex so many years ago. Hey, if there is a Tilt-a-Whirl on your street, you may as well ride it.

You’re really too nice to have been born on July 9.

You are a Halloween baby: It might not be politically correct, but if Thomas Jefferson hadn’t mosied over to a human banana at that office party, you may never have come to pass.

You were conceived backwards because of hotel bathroom mirror placement. This is why you always have this weird feeling that you have eyes in the back of your head.

You’re Madonna. If you’re not Madonna, you just have a lot of itchy bras.

You are a McRib season baby: You are the fated byproduct of the high holy McRib season, destined to wreak havoc on your relatives and disappear before you can be held accountable. The coupling that brought you to market is a mythologized but ultimately tragic affair that ends with you killing your father and marrying your mother.

You are a Winter baby: Your parents were on their way to a cookie swap party in wet snow when your mother activated the windscreen wipers and a burst of washer fluid froze on the windshield, blinding them. Pulling over to de-ice the car, your father took your mother into his arms and said, “THIS IS WHY I HATE COOKIE SWAP PARTIES.” She then tore off his turtleneck and jumped his bones.