9/11 — no two numbers and a slash have ever meant so much outside of mathematics and Yelp ratings. On the morning of September 11th, 2001, four attacks were committed by the Islamic terrorist group al-Qaeda, causing the collapse of the Twin Towers in New York City, damaging the Pentagon in Washington, D.C., and scuffing up the ground in Shanksville, Pennsylvania.

Did the events of 9/11 happen the way the government claims? Was 9/11 actually an Inside Job despite the fact that it clearly took place outside? Who was ultimately responsible for the horrifying loss of life and increased sales of tiny American flags? Osama bin Laden? President Bush? Are they the same person? I’ve never seen them in the same room and I’m always looking.

Can I find some truth in the world of Truthers? Most would say, “No,” but in German, “No” is nein, the eleventh most useful word in the language. Coincidence? I think not.

Like my other free shirt says: COINCIDENCES DON’T EXIST.

Debunking Claim: The National Institute of Standards and Technology concluded that the burning jet fuel didn’t need to melt the steel beams in the towers, only to weaken them enough to bring about the collapse.

Rebunking Claim: The heinous attacks on the World Trade Center were perpetrated for one purpose: to educate people on whether or not jet fuel can melt steel beams. Think about it. Before 9/11, maybe a handful of jet fuel experts were aware that burning jet fuel would be unable to melt steel beams. Nowadays, it’s a commonly recited fact, like 2+2=4 or that George Washington was the first President not to walk on the moon. So who planned the attacks in order to get this knowledge out into the world? Think of the smartest person you know. It was probably that person. Blame them for 9/11 the next time you see them. 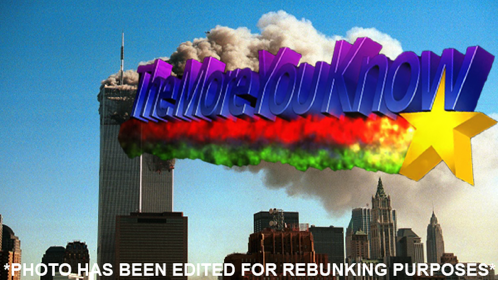 Conspiracy Claim: Bush did 9/11. The President of the United States needed a reason to attack and invade Iraq and Afghanistan, so he arranged the September 11th attacks to justify his actions. It was an inside job.

Debunking Claim: The 9/11 Commission Report, requested by President Bush and Congress, found absolutely no evidence or support to this claim or any claim attributing the attacks to high-ranking government officials. It was not an inside job.

Rebunking Claim: The 9/11 Commission Report should be titled the 9/11 Omission Report, because it didn’t include the only fact that matters: Bush didn’t do 9/11 – Lee Greenwood did 9/11. “Who’s Lee Greenwood?” you ask, like an uncultured idiot. He’s the writer and singer of “God Bless The USA,” the “I’m proud to be an American” song that rose up the music charts as the towers fell, and twice as fast. The song, off of Greenwood’s famously underrated Youve Got a Good Loving Comin’ album, was originally released in 1984, and after 17 years of almost no radio play, Greenwood knew he needed to do something to get the song some traction. What better way to get a patriotic song some airplay than by planning one of the most devastating attacks on America in all of history? Who were those hijackers then, if not al-Qaeda members? This picture might shine a light on that. 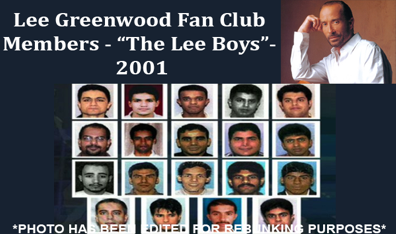 Conspiracy Claim: While not directly responsible, the government knew about the attacks and allowed them to happen, much like the attack on Pearl Harbor, to propel the country into war.

Debunking Claim: At most, the government had memos stating that Osama bin Laden desired to make an attack on US soil, but assuredly didn’t have intel regarding the 9/11 attacks. Even if a war was desired by the Bush administration, it could’ve been achieved much easier and without allowing the loss of so many American lives.

Rebunking Claim: It is very astute to compare 9/11 to Pearl Harbor, because the government was most certainly aware of both attacks and let them happen for the very same reason: to invigorate the film industry. Both “surprise” attacks gave Hollywood’s writers easy screenplay ideas, bringing about such great-ish films as Pearl Harbor, Tora! Tora! Tora!, United 93, World Trade Center, and Loose Change. Genius ideas for movies just don’t happen, you have to let them happen, and that involves accepting that thousands of people will die and massive wars will start. You wouldn’t even believe me if I told you what atrocities were allowed to occur for Shrek to come about. Here’s a hint: it involves Bosnia. 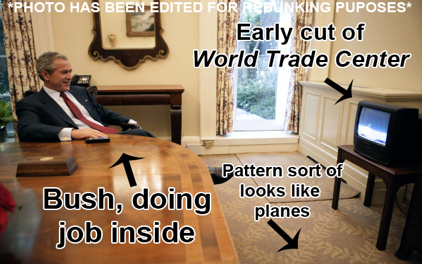 Conspiracy Claim: The “planes” that hit the Twin Towers and the Pentagon were missiles surrounded by holograms that were made to appear as planes.

Debunking Claim: Not only is this supposition well beyond current hologram technology, it cannot account for the missing planes, passengers, and hijackers. This claim is as incorrect as it is absurd.

Rebunking Claim: The old “the planes were holograms” claim is just a hologram of what really happened. Of course there were planes! However, there were no towers. And no Pentagon. And no field in Pennsylvania. Those were all holograms. Always have been and always will be. The Twin Towers were a symbol of business and commerce. They didn’t need to be real. The Pentagon is a symbol of defense and military might. It doesn’t need be tangible. The field in Pennsylvania is a symbol of grass and dirt. It works just as well as a projection as a reality. So if the planes were real, but the things they crashed into were holograms, why’d the planes explode? Airline food, obviously. 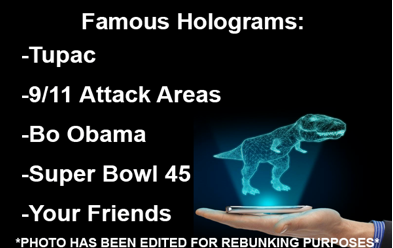 Conspiracy Claim: Insider trading involving United Airlines and American Airlines, the airlines involved in the attacks, and certain defense contractors proves that there was extensive foreknowledge regarding the attacks.

Debunking Claim: The trading irregularities leading up to 9/11 have been explained as unrelated to the terrorist attacks. The only proven foreknowledge of the events has been linked to al-Qaeda and those responsible for the attacks.

Rebunking Claim: We didn’t have foreknowledge, but with our current postknowledge, we can always pull a Back to the Future and make it so it never happened. 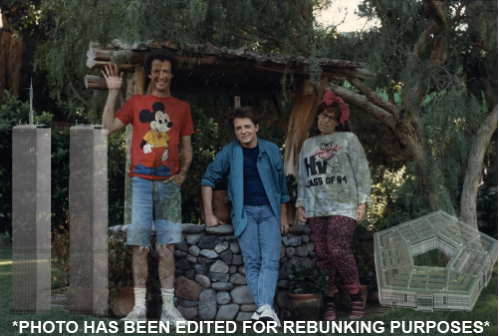