A Jeopardy! Board for Determining Who Should Be the Next Host of Jeopardy!

“Mike Richards, the executive producer of ‘Jeopardy!’ who was tapped to succeed Alex Trebek as host of the venerable game show franchise, announced Friday he is stepping aside amid recent scrutiny over past comments about women, Jews, and poor people.” – NBC News, 8/20/21 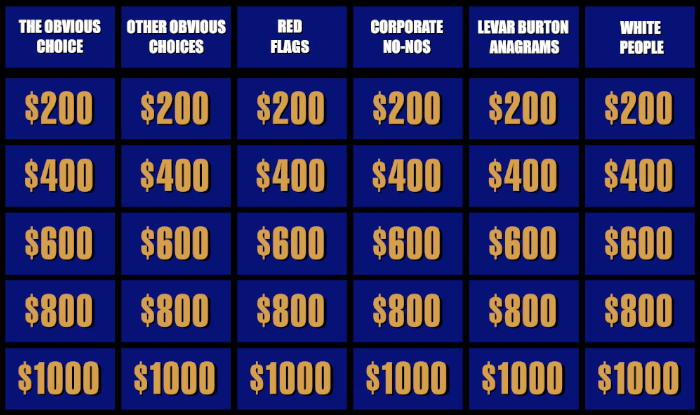 Click on each box to reveal the answer. After viewing, click back in browser to return to board. Mobile users: rotate to landscape.

$600: We would have accepted any marginalized group of people

$800: We would have accepted any answer other than “Aaron Rogers”

$1000: We would have accepted any answer other than “Dr. Mehmet Oz”

$1000: What is “the white supremacist heteropatriarchy?”