by The Editors of McSweeney’s 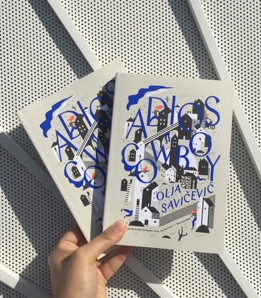 Dada’s life is at a standstill in Zagreb—she’s sleeping with a married man, working a dead-end job, and even the parties have started to feel exhausting. So when her sister calls her back home to help with their aging mother, she doesn’t hesitate to leave the city behind. But she arrives to find her mother hoarding pills, her sister chain-smoking, her long-dead father’s shoes still lined up on the steps, and the cowboy posters of her younger brother Daniel (who threw himself under a train four years ago) still on the walls.

Hoping to free her family from the grip of the past, Dada vows to unravel the mystery of Daniel’s final days. This American debut by a poet from Croatia’s “lost generation” explores a beautiful Mediterranean town’s darkest alleys: the bars where secrets can be bought, the rooms where bodies can be sold, the plains and streets and houses where blood is shed. By the end of the long summer, the lies, lust, feuds, and frustration will come to a violent and hallucinatory head.

Today we’re featuring an excerpt of the book, which is out today. The Guardian writes, “With this novel, which lodges itself in your chest like a friendly bullet, a glorious new European voice has arrived.” Copies are available at the McSweeney’s Store.

As we walk along the side of the motorway, my mother is transformed into a mole alongside a poster of a pastoral center on which is written Jesus Loves You, then into an extinguished glow-worm beside the discount store and into a minus sign when moving beneath a larger-than-life-size, washed-out poster of our very own “Hero Not War Criminal,” General Gotovina. We walk on in the dust beside the road by the petrol station, on a path barely wide enough for two narrow feet. The speed limit here is sixty, but people drive at least eighty and a little further on, the four-lane fast road comes to an end and drivers lose all sense of speed. Farmers in their tractors are known to come out onto the highway from one of the un-made-up side lanes and slow the traffic down to a crawl.

Until recently there was also horse shit on the highway, but not anymore. It’s become too dangerous to drive a cart and horses there. And I think there’s just one man in the whole town with a horse now; it’s illegal to keep a horse in town now, but he’s the old blacksmith, and they’re just waiting for him to die in peace, if Ma is to be believed. What’ll happen to that horse when the blacksmith dies, I wonder. There used to be a smithy in the Old Settlement run by that old man, in the port where the restaurant La Vida Loca is now. But it closed the year Daniel was born. I remember the sound of the shoeing, the horses neighing at the darkness and fire. I was still very small, and I looked at things from a distance, staring out of the summer light that hurts the eyes, into the open darkness of that building. I was still very small when along the street where we lived one would hear hoof beats on the worn stone, an unreal sound the way the sound of a Ledo van inviting you to have an ice cream during the afternoon siesta is unreal. Willy Wonka has come to your town too.

But there are no longer fresh horse droppings in the streets. Dogs shit and no one picks up after them, just as they didn’t after the horses. But no one’s going to throw dog turds at you, you can be sure. That really would surprise me.

When the shape of my mother in the distance becomes a line—a horizontal line, a minus, rather than vertical, as one might expect, because of the glare on the road—I turn and hurry toward the house, along the concrete stream beside the new buildings for disabled veterans. There used to be all kinds of rubbish and treasure in that stream: in springtime it would hurl itself over the trash barrier. Since it’s been cleaned out and lined with concrete, I’ve noticed that a ribbon of slime trickles along it, congealing into green mud in summer.

“You could go to the cemetery on your own tomorrow,” I suggested to Ma the day after I arrived. “I’ve got things to do in town, it’s quite important,” I lied.

Ma smiled at that, exactly as my sister had said she would, producing her Hollywood smile at the wrong moment. She had nice teeth, a gold incisor in her lower jaw. Sometimes she would tap her teeth with her fingernail to demonstrate their firmness and health.

“Mother looks like a smiley on speed,” I told my sister over the phone, later.

“See what I mean,” she replied, blowing smoke into the receiver at her end.

I told her I found Xanax, some Prozac, Diazepam, Praxiten and Valium on the floor, under the dresser in the kitchen in an ancient boiled-sweet tin along with plasters, Aspirin, and cough pastilles. Ma wasn’t even hiding them, as my sister had presumed—or else Ma knew that one of the best places to hide things is where they can be seen. Yet last winter she had thrown them all into the bin, I saw her do it.

“Where on earth does she get them?” asked my sister, incensed.

It’s not hard, I thought. Half the student hostel was on vodka or wine combined with Valium, sedatives, and other bits and pieces that can theoretically only be got on prescription. They’re cheaper than sweets.

“Leave her some Lorsilan to help her sleep,” my sister advised. “Anything else you find you can chuck down the toilet.” I flushed it several times, but one blue Prozac capsule kept floating back to the surface. In the end, though, even that persistent one disappeared.