It would be extremely difficult to think of a more influential writer than William Shakespeare. I could do it, of course, but it’d be extremely difficult, so I choose not to. In fact, most people are perfectly content in believing that the man born in 1563 in Stratford-upon-Avon was the greatest writer of all time.

However, many conspiracy theorists believe that isn’t true. That ‘Measure for Measure’ our accepted history of Shakespeare is a ‘Comedy of Errors’ and as fanciful as a ‘Midsummer Night’s Dream.’ They claim that many of the facts known about the Immortal Bard’s life simply couldn’t have set the scene for bringing about the world’s premier, and most read in high school, writer. Conspiracy theorists either attribute Shakespeare’s works to another prominent writer of his era or to a group of writers using the Shakespeare name as a pseudonym.

Was the Stratford born son of a glove maker truly the author of some of the most famous works in history? Was Shakespeare merely an actor in the great duplicitous play known as Life? Do you not believe I could think of a more influential writer than Shakespeare? Stephen King. There I did it and he did It.

By examining claims of conspiracy theorists, conspiracy debunkers, and then rebunking with my own, I shall attempt to quell The Tempest that is the mystery of Shakespeare. 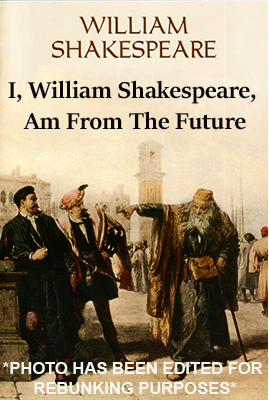 Conspiracy Claim: Shakespeare’s plays contain such vast knowledge of foreign places and familiarity with courtly and aristocratic affairs to have been written by someone born so low in England’s social order.

Debunking Claim: Elizabethan England featured numerous playwrights of lowly or humble backgrounds, some even worse off than Shakespeare. The Bard was such an amazing talent because he was able to write about aristocratic situations without directly experiencing them.

Rebunking Claim: The only means of reconciling Shakespeare’s knowledge of court life and foreign traditions is simple: he’s from the future. Shakespeare was actually born far in the future where his talent for writing wasn’t appreciated by a society that preferred communicating through emoticons and different gesticulations of their hoverboards. He traveled back to the time periods of Julius Caesar, Antony and Cleopatra, and the era where shrews were tameable to get first hand accounts for his famous plays, before picking 16th-century England to make a name for himself as the greatest writer of all time(s). This also explains why The Merchant of Venice’s original title was I, William Shakespeare, Am From The Future. 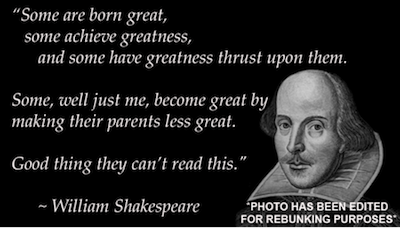 Conspiracy Claim: There exist no records of Shakespeare ever receiving an actual education. Plus, since he came from an illiterate family incapable of homeschooling, it’s not possible that he would become the masterful literary genius we revere today.

Debunking Claim: The lack of educational records from over 400 years ago does not mean Shakespeare wasn’t educated. Yet, if that is the case, his works feature historical blunders and errors that account for someone without a true classical education.

Rebunking Claim: Shakespeare never wanted anyone to be able to claim responsibility for his genius. That’s why after finishing school, he destroyed any record of his attendance. A genius didn’t need to go to school. He also forced his literate parents to forget how to read or write. A genius had to overcome his family’s weaknesses. Whenever someone gave Shakespeare advice, such as “Don’t burn the school’s records. They’re flammable!” or “Please don’t make us lose our literacy, son! We were just starting to enjoy it,” or “Stop doing these things or else people will later think you didn’t write your own plays,” he would do the opposite. A genius never followed the guidance of an ordinary, sane person. To more succinctly sum up this claim: Shakespeare was a jerk who ever so slightly decreased England’s literacy rate. 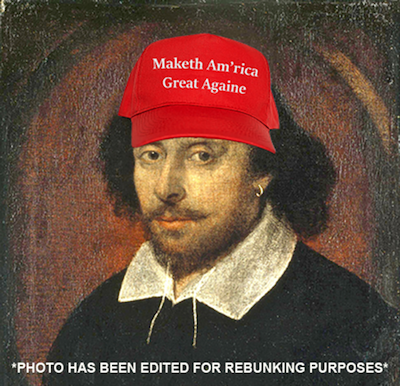 Conspiracy Claim: There isn’t even evidence that explicitly states William Shakespeare of Stratford was a writer. The only surviving documents paint him as a businessman, real estate investor, and actor.

Debunking Claim: The absence of evidence is not the evidence of absence. Plus, documents from Shakespeare’s contemporaries refer to the playwright from Stratford as also being an actor, corroborating with the surviving documents.

Rebunking Claim: Businessman, real estate investor, and actor? Shakespeare was one of Donald Trump’s past lives. 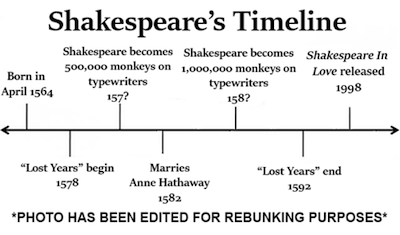 Conspiracy Claim: History knows little to nothing about Shakespeare between the years of 1578-1582 and 1585-1592. During these “Lost Years,” Shakespeare somehow turns from an absolute nobody to an established London playwright. It’s unimaginable that such a rise in fame and standing would go undocumented.

Debunking Claim: Gaps in history don’t always indicate shadowy forces at play. It is believed Shakespeare was a Catholic and lived in Italy during those years to escape religious persecution, which would explain why 12 of his plays feature lush and realized Italian settings. 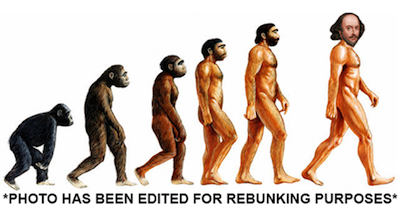 Conspiracy Claim: The drastic change of styles in Shakespeare’s catalog can only be explained by several authors releasing material under a pseudonym.

Debunking Claim: Shakespeare’s style merely progressed like that of all writers. His Elizabethan era plays are different from his Jacobean era plays, just like those of his contemporaries who also changed with the times.