Who controls the world? Sure, it’s easy to identify who doesn’t. The homeless don’t or else they’d have homes. Rhinoceroses don’t, or there would be more than a truckload of them left. Sir Charles McDewitt V doesn’t because I just made him up. However, some conspiracy theorists believe they do know who is pulling the strings on the puppet known as Civilization. And no, it’s not the ever powerful puppeteer union or else puppeteers wouldn’t be the only occupation not allowed to vote.

Several New World Orders have been theorized to exist, groups of the powerful elite that orchestrate every important world event in an attempt to create an omnipotent authoritarian world government. I will examine the claims of the conspiracy theorists and debunkers regarding several of these groups and join in on positing who is truly calling the shots on this planet that I, and probably some of you, call Earth. Is it the ultra-wealthy? Is it an alien cabal? Is it actually Sir Charles McDewitt V and I was wrong in thinking I made him up? Allow me to lift the fog of mystery and replace it with the fog of truth.

Conspiracy Claim: The Devil has given a group of individuals vast wealth and power in return for them turning the world into the dystopian end times referenced in the Biblical Book of Revelation. The Devil will then rule the newfound Hell on Earth with help of the Antichrist.

Debunking Claim: A spirit of fear has been created through the distortion of scripture and biblical literalism. The Book of Revelation’s comforting message of the coming of the Kingdom of God has been twisted into one of fear and panic, proving how any message can be used by conspiracy theorists to prove an irrational point.

Rebunking Claim: The Devil often gets a bad rap for no reason. If carrying a pitchfork and tricking people into eating apples is evil, then every single farmer should be locked in a church and pelted with holy water balloons. Plus, even if Satan is a little less than perfect, he gets things done. I’ve never heard of a single hiccup in the management and operations of Hell. He runs a tight and efficient ship of the damned. So the Devil very well may be putting people into places of wealth and power, but he’s only going to give us the best of the best. Satan’s merely a management consultant, putting us in the greatest and most able hands. He gets a few souls, sure, and he may be sending us ultimately towards a dystopian Hell World, that’s a given, but until we get there, things are going to run smoother and smoother and as a planet we’ll be raking in the J.D. Power awards. 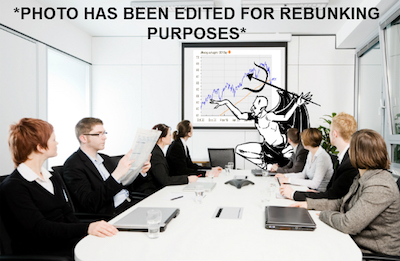 Conspiracy Claim: Freemasons, members of one of the world’s oldest secular fraternities, have a hidden political agenda to rule the world according to Masonic principles. Sacred Masonic geometric occult patterns have been interwoven in American architecture, currency, and symbols since the time of the Founding Fathers as a part of plan to forge the first Masonic government before assuming total world control.

Debunking Claim: Freemasonry promotes rationalism, and has no belief in power of occult symbolism. Freemasonry symbols (the All-Seeing Eye and unfinished pyramid, etc) borrowed for American seals or currency don’t represent something insidious. Also, individual Masonic lodges have vastly different beliefs and practices. They aren’t united in one common goal.

Rebunking Claim: Both Freemasons and the entire country of America have been merely the means of putting one entity into power: geometry. Tired of being relegated to middle school math classes and high school remedial math classes, geometry put its symmetric foot down and infused itself into symbols of power. As America and the Masons attained power, so too did the most important and basic shapes of geometry: the sharp triangle, the encompassing circle, and the feathery eagle. By now, geometry doesn’t even need the United States or the Freemasons. Shapes have pervaded into every aspect of life. From the money we use (rectangles!), to the phones we carry (rectangles!), to the squares we draw (technically rectangles!), geometry has us from every angle. 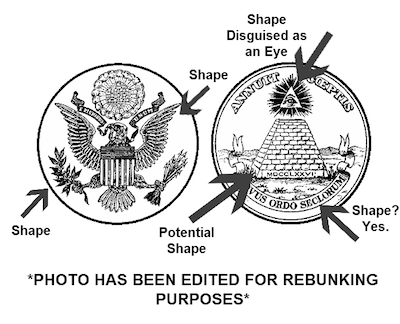 Conspiracy Claim: The Illuminati, a secret society formed in 1776 in Bavaria, have subversively played large parts in most major events throughout history. They reign now through front organizations such as powerful secret societies, private business clubs, and influential think tanks and almost all major world figures are members.

Debunking Claim: The Illuminati as a society was suppressed and broken up in Bavaria around 1785. There is no proof that any form of it has survived, let alone amassed the power and scope speculated. They simply don’t exist.

Conspiracy Claim: After the Second World War, a group of ex-Nazis bonded together to bring about a Fourth Reich. They have been working behind the scenes to keep Nazi practices of heightened militarism, propaganda, spying, and imperialism alive in all countries until they can take supreme control.

Debunking Claim: The “Nazi” practices listed above existed long before the Nazis and are ingrained in politics and the human condition. No semblance of a powerful Fourth Reich has appeared in the 70 years since the end of World War II.

Rebunking Claim: A Fourth Reich that acted on the same principles as the Third Reich (World War II era), the Second Reich (World War I era), and the First Reich (World War Z era) would be too obvious and stopped before it could build momentum. A successful Fourth Reich would have to be completely different from anything history has seen. That’s why the Fourth Reich is Uber. Nobody expects the next great German Empire to be a revolutionary transportation system, but the clues are there. Uber is a German word that can be mistranslated to “The Fourth Reich.” Plus, you can’t walk down the middle of an autobahn in Germany without seeing a hundred cars, and a car is just an Uber in waiting. And the real smoking gun? My last Uber driver said he gets paid in old Nazi memorabilia. He said he could get money, but the fact that Uber even makes that an option proves the Fourth Reich is alive and well and waiting out front for you. No need to heil a cab this time. 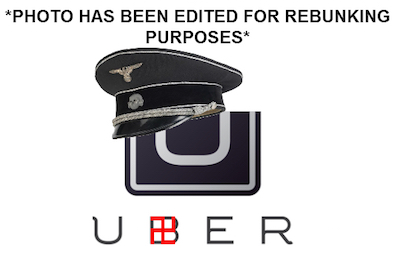 Conspiracy Claim: Extraterrestrials from other planets or dimensions have been living secretly amongst us, gaining positions of power in governments, corporations, and religious institutions in order to soon take over the world in one fell swoop.

Debunking Claim: A lack of trust in governments and society in general leads conspiracy theorists to look to any easy answer to explain complicated matters. Hidden aliens and interdimensional beings are just another example of theorists removing the burden of facts from their claims.

Rebunking Claim: Malevolent alien species truly did infiltrate humanity years ago. However, they foolish disguised themselves as the greatest enemy of all humans: other humans. Humans can’t stand other humans, a fact the aliens didn’t realize until it was too late. Rampant human-on-human violence, which unbeknownst to real humans was actually human-on-hidden-alien violence, wiped out all of the concealed aliens before they could enact any of their plans of domination. The NRA saved the world yet again.

Conspiracy Claim: A global power elite is secretly pushing a transhumanist agenda to become a post-human ruling class, combining biology, technology, and artificial intelligence. Through human enhancement technologies they will approach the concept of an artificial singularity, and normal, unenhanced humans will be left behind to perish.

Debunking Claim: Many influential politicians are outspoken bioconservatives against the idea of human enhancement. Proposed bans on human cloning and selective genetic engineering prove that a transhumanist movement has not gained traction.

Rebunking Claim: The next President will be a giant BlackBerry, but nothing will change. 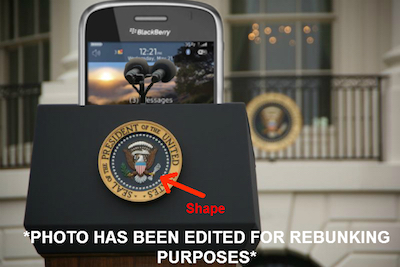