In the 1960s, and in pretty much any time period thereafter, it was beneficial to be a member of the Beatles. The rock group had fans, fame, fortune, and other good things that started with the letter “F,” the alphabet’s coolest letter throughout the sixties. However, many conspiracy theorists believe the Beatles did not have one key element starting in the later half of the decade: Paul McCartney.

Theorists claim that McCartney, one of the top four Beatles, died in a car crash in 1966, and, in order to keep the yellow cash $ubmarine revolving down Penny Lane buying love at every stop, record executives and the other band members replaced Paul with a lookalike.

Examining the claims of conspiracy theorists, debunkers, and providing my own conjectures, I’ll leave it up to the reader to determine if the Paul Is Dead theory has Wings, or if we can bury it in Strawberry Fields Forever and Let It Be.

NOTE: If Something is capitalized, it’s probably a music reference, except for words at the beginning of sentences and the names of people. Those are capitalized for no reason whatsoever.

Conspiracy Claim: Sgt. Pepper’s Lonely Hearts Club Band, the first album made after McCartney’s death, features a lyric where the Beatles introduce their listeners to “the one and only Billy Shears.” Billy Shears is the name of the man who replaced Paul in the band.

Debunking Claim: Billy Shears is merely the name of a member of the fictional Lonely Hearts Club Band. Also, if Paul had died and been secretly replaced, it’d be insane for the Beatles to use such an explicit lyric with the replacement’s real name.

Rebunking Claim: The Beatles wouldn’t be silly enough to announce the new Paul’s name, but they’d be just the right amount of silly to hint at his death. Using unnecessarily complicated anagram technology, I’ve determined that the letters in “Billy Shears” can be rearranged to form “Shilly bears.” This would mean nothing to someone without an in depth knowledge of the Beatles (whose original name WASN’T the Beatles, it was something else), but since I’m a Beatle boy through and through, it has all Come Together. All super fans know that the original McCartney’s favorite hobby was playfully mocking bears in a Scottish accent. “Shilly bears” (“silly bears” in real English) were obviously the final words Paul ever spoke before the bears had enough of his nonsense and mauled him to death. Any criticisms of this claim can easily be shut down by noting that “maul” and “Paul” rhyme together really well. 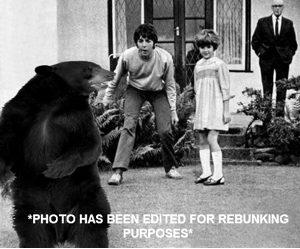 Conspiracy Claim: On the album cover of Sgt. Pepper’s there is a wreath shaped like a bass guitar, McCartney’s signature instrument. This proves he died and the Beatles replaced him. They left the wreath as a clue to an astute viewer.

Debunking Claim: The wreath is either a merely aesthetic choice or a tribute to the Beatles’ original bassist Stu Sutcliffe who passed away in 1962.

Rebunking Claim: The yellow wreath is a red herring. The true smoking gun on the Sgt. Pepper’s album cover is that, if you look close enough, the drumhead says “Dead Is Paul,” which when reading the words backwards aloud (clever, Beatles!) sounds very close to “Paul Is Dead,” which when put into the context of whether or not Paul is dead, seems to hint that Paul is dead! Also, McCartney’s grave can be seen in the bottom left of the cover. 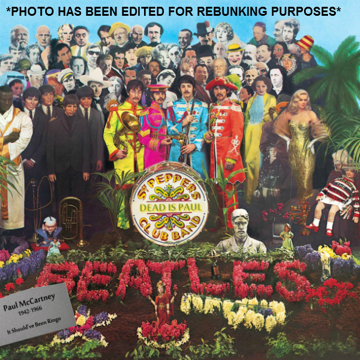 Conspiracy Claim: In the final moments of the song “Strawberry Fields Forever,” John Lennon can be heard speaking the words “I buried Paul,” thus Paul is dead since buried people normally aren’t alive.

Debunking Claim: John Lennon has stated that what he actually said was “cranberry sauce.” Conspiracy theorists simply heard what they wanted to hear.

Rebunking Claim: What Lennon actually said was “Cranberry Paul,” an attempt to tell the world that Paul had died and had been replaced by a can of cranberry sauce wearing a convincing wig and a set of even more convincing googly McCartney eyes. 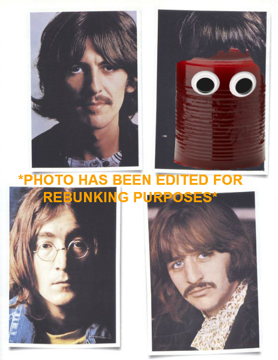 Conspiracy Claim: The Abbey Road album cover signifies that Paul is dead. It features a funeral procession with John, dressed in white, symbolizing a clergyman. Ringo is in black as a mourner. George is in denim jeans and a denim shirt as a gravedigger, and Paul, barefoot and out of step with other members of the band, is the corpse.

Debunking Claim: Each Beatle made their own wardrobe choices for the photo without any sort of underlying meaning. Paul even wore sandals for 4 out of the 6 photos taken, however one of him barefoot was chosen for the album cover.

Rebunking Claim: You can see any group of four people and convince yourself that their outfits suggest they’re a part of the classic clergyman, mourner, gravedigger, and out-of-casket corpse four person tried-and-true funeral procession. You really need to look at the photos taken, but not chosen for Abbey Road’s cover to get a glimpse at the truth about Paul. The one below shows just how many Paul lookalikes the Beatles were using to keep the truth about his death from being found out about Here, There and Everywhere. It’s obvious why they didn’t choose this photo for the cover, Because it’s slightly out of focus and some of the Pauls are blinking.\

Conspiracy Claim: The fake Paul’s solo projects and albums with the band Wings are so bad that he had to have died and been replaced with a less talented person.

Debunking Claim: [Nothing could be found to debunk this conspiracy.]

Rebunking Claim: Oh! Darling. This seems to check out. I blame Cranberry Paul. 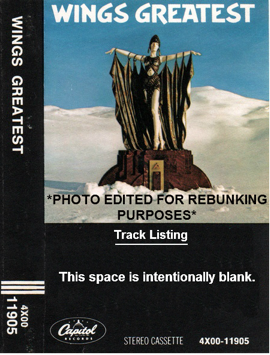