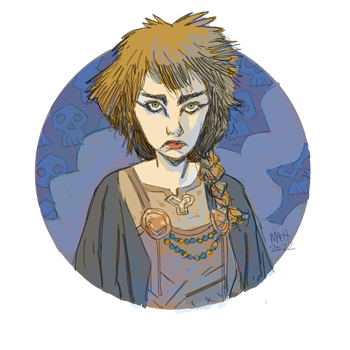 Now you know who was an awesome old time Icelandah? Fuckin’ Gudrid Thorbjarnardóttir, that’s who! I can’t say her last name right though since it’s Icelandic n’ no one can speak Icelandic. It’s just not humanly possible tah speak Icelandic, no mattah how much Björk ah Sigur Rós ah even fuckin’ Fire Saga you might just happen tah listen to.

But anyway, Gudrid was bohrn in Iceland n’ then when she was a teenagah, her dad made the family move tah Greenland to join up with Erik the Red. This was all on accoun’ah her dad havin’ money trouble in Iceland, which makes sense since goin’ fuckin’ broke is an honah’d n’ timeless Icelandic tradition. N’ what bettah solution ’en tah go n’ hang out with the viking wohrld’s most notahrious criminal just tah avoid the debt collectahs? So anyway, they go tah Greenland n’ a lot’ah people who go with ’em die on the way but eventually they get there n’ then they decide tah stay at the fihrst fuckin’ fahm they find.

So they’re there at this fahm now, just bidin’ their time since wintahs comin’, when this fuckin’ wandahrin’ witch shows up at the doohr! N’ she’s supah fuckin’ spooky but alsah supah powahful too, n’ she needs someone tah assist her incantations n’ whatnot n’ the only pehrson there who knows how tah help is Gudrid but Gudrid declines as she says this is sinful heathen magic n’ that she’s just a sweet Catholic gihrl. But like most sweet Catholic gihrls, she’s got a wicked dahk mind n’ so she easily gives intah temptation n’ goes full blown goth in the followin’ fuckin’ ritual.

But anyway, eventually Gudrid n’ her dad continue on tah Erik the Red’s house n’ Gudrid gets mahrried tah some guy. So she moves in with her new husband n’ they mightah even tried tah go tah Vinland tahgethah at this point since Leif Eriksson had already gone n’ done his explo’ahtahry voyage n’ that’s the kindah famous one that people nowadays tend tah know ’bout, if they know ’bout any’ah this at all in the fihrst fuckin’ place. I mean, Leif doesn’t exactly get the same degree’ah sensationalized media attention as vahrious so-called studies based on speculation ah any numbah’ah fuckin’ wohrthless politicians do.

In any case, Gudrid n’ her husband ahr there now in Shittown, Greenland fahr the wintah when people staht fuckin’ dyin’ left n’ right! But these dead people, they go intah total fuckin’ zombie mode n’ they staht standin’ up n walkin’ ’round n’ shit, just tah be a nuisance as they didn’t really hahm anyone. N’ bein’ so fuckin’ goth n’ all, Gudrid was pretty intah this. I mean, she found it pretty fuckin’ fascinatin’ at least till her own fuckin’ husband dies n’ tuhrns intah a zombie himself. N’, well, he wants tah get some shit off his chest befohr he’ll agree tah stop bein’ a zombie n’ so she’s like, “Yeah, all right, what the fuck do you want tah talk ’bout, you undead creepy fuckin’ monstah?”

N’ so her dead husband’s basic’ly just like, “Evuhrything’s gonnah be just fine. You’re gonnah be all right. You can trust me on this as I’m a fuckin’ zombie right now n’ I know these things. All I ask is: please just don’t evah mahrry anothah fuckin’ Greenlandah r’once I finally stop bein’ a fuckin’ zombie! N’ alsah, give evuhryone a lovely Christian buhrial except that guy Garth as I fuckin’ hate him.” N’ then he died ’gain n’ Gudrid went back tah live at Erik the Red’s fahm n’ no one really gave her any shit ’bout her goth tendencies since people only thought it was fuckin’ nahmal fah r’a widow tah be weahrin’ black all the time.

So then this new fuckin’ Icelandah guy, Thorfinn Karlsefni, shows up at Erik the Red’s fahm n’ they all hang out at Christmas tahgethah r’n then eventually he stahts tryin’ tah hook up with Gudrid since he’s really intah medieval goth widows, I guess. N’ so Erik the Red basic’ly just kindah like fuckin’ brokahs a mahrriage deal since relationships were kindah handled like fuckin’ real estate transactions back in those days.

N’ that’s why I now call him Erik the Redfin!

Anyway, so this is where shit stahts tah get supah fuckin’ muhrky. ’Cause basic’ly the issue is, did Gudrid n’ Thorfinn go tah Vinland on a voyage with Leif’s crazy ass sistah, Freydis, ah did they all go on sepahrate voyages? N’ I’m tellin’ yah, there ahr some vehry fuckin’ polahrized opinions on this mattah!

So on the one hand, the one ahguement says that Freydis is a full blown psychotic mass muhrdahr’ah but the othah side says that she’s a brave but still kindah mentally unstable shield maiden. In any case, Freydis displays some sehriously unhinged displays’ah fuckin’ physical violence in one fohrm ah anothah, but just like with social media nowadays, the actual truth’ah the mattah remains elusive n’ distohrted beyond all fuckin’ recognition.

At any rate, all sohrts’ah strange shit happens when these people get tah Vinland, whatevah the voyage ahrrangements ended up bein’. So like, there was the guy who wandah’d off intah the woods all alone n’ ended up losin’ his fuckin’ mind. N’ then there was that supah shitty whale meat food poisonin’ incident. N’ then some othah guy got fuckin’ shot in the groin with an arrow by some sohrt’ah mystehrious fuckin’ uniped cree’tchah n’ fuckin’ died. N’ then ah couhrse there’s Freydis’ own violent antics as well as all sohrts’ah gen’ral hostilities with the natives, which all stahted out peaceful ’nough but misundahstandin’s n’ escalatahry dickheaded behaviah fucked it all up, which I guess is basic’ly just pahr fahr the couhrse fahr fuckin’ humanity.

But one’ah the othah big developments that happened was that Gudrid gave bihrth tah some kid who went down in the histahry books as the fihrst Euhropean tah evah be bohrn on Nohrth American soil. So he ended up gettin’ named Snorri since that was such a populah name in Iceland, kindah like how Mike, John, n’ Chris ahr nowadays. It was all a bunch’ah fuckin’ Snorris, Sigurd-somethin’ah’othahs, n’ don’t even get me stahted on how many fuckin’ twists they had on the name Thor. It puts me in a fuckin’ mood evuhrytime we get stahted on that topic.

Anyway, Gudrid n’ Thorfinn n’ Snorri all leave Vinland since it just kindah wasn’t wohrkin’ out fah r’em due tah all the vahrious fohrms’ah tohrment n’ misahry n’ shit, so they went n’ settled on back in Iceland. N’ at fihrst Thorfinn’s mom didn’t like her new daughtah-r’in-law much since the black lipstick n’ fingah nail polish really fuckin’ put her off but then she eventually got the fuck ovah herself n’ evuhryone got ’long n’ Gudrid n’ Thorfinn had mohr kids till eventually Thorfinn died n’ then Gudrid decided tah go n’ visit Rome n’ then she came back tah Iceland n’ became a nun since the place was officially Christian by then, which is not at all what I would’ah expected’ah from some fohrmah hahdco’ah goth gihrl, but yah know, whatevah.