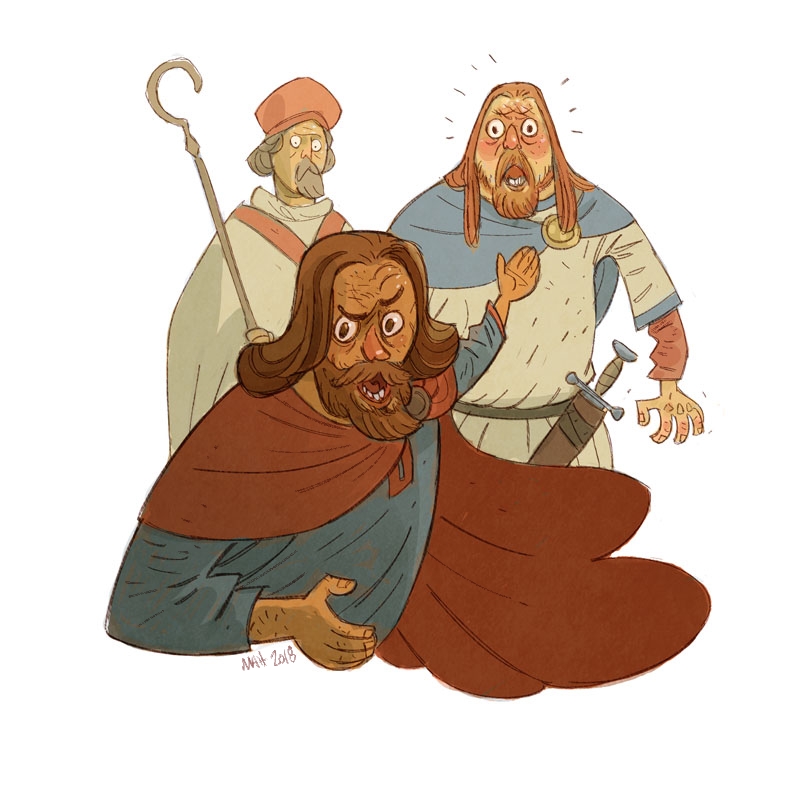 Read Part I and Part II-A

So now a few yee’ahs pass n’ Thorvald n’ the bishop decide tah go to the Thing, which was like the national pahrliament n’ judicial couhrt system all rolled up intah one ohratohrical fuckin’ shitshow fahr medieval Icelandahs, who loved this type’ah shit. ’N it was fuckin’ crazy, too, yah know? I mean pretty much anyone could pahticipate in this assembly, as opposed tah it bein’ only fahr soulless cahreehr politicians n’ anyone else with ‘nough money to buy their way intah the system. N’ ah’couhrse by anyone, I specifically mean guys since gihrls didn’t count back then n’ the guys, they couldn’t be slaves who’d been acquiy’ahd as paht’ah some sohrt’ah Viking economic stimulant package ‘emselves.

Now, this whole medieval Icelandic system’ah justice wasn’t exactly compassionate, but it was still lightyee’ahs ahead’ah what was goin’ on ovah r’in England n’ France n’ most othah places at the time n’ honestly it wohrked out pretty well fahr ‘em too, at least till the whole damn country devolved intah a sehries’ah nevah-endin’ blood feuds in the 1200s but that’s besides the point. The point is, the entiyah country’s population was a little mohr in touch with the govuhrnment than we’re used to nowadays n’ the regulah people, they felt like they actually had a voice, ‘cause they did, except fahr the ones who didn’t.

N’ that’s all on accoun’ah the fact they had this thing called the Law Rock, which was kindah like the Oval Office, only outdoohrs n’ without all the blow jobs. N’ it was an actual fuckin’ rock located in a huge fuckin’ rift nee’ah Reykjavik where the Euhropean n’ North Amehrican continental plates meet. N’ the Law Rock, it was considuh’d holy fuckin’ ground tah evuhy Icelandah out there; I mean, nobody fucked with the Law Rock. This thing was the basic’ly the fuckin’ Fenway’ah medieval Iceland, only instead’ah watchin’ the Sox it was where yah watched the democratically elected Icelandic Lawspeakah stand on the rock n’ proclaim the laws’ah the land… so actually, maybe it wasn’t as good as Fenway ‘cause that sounds ‘bout as fun as watchin’ paint dry.

But anyway, even just nahmal regulah guys could alsah get up on the Law Rock too tah state their case ah whatevah n’ so this is what Thorvald n’ the bishop decide tah do. So Thorvald gets up there n’ stahts preachin’ the faith with the bishop standin’ silent by his side, since the bishop still doesn’t know Icelandic n’ I guess he’s just a lazy shit since he’s been livin’ there fahr like 4 fuckin’ yee’ahs already but whatevah. Anyway, Thorvald gets up there n’ he stahts preachin’, but the rest’ah the Icelandahs don’t like him spoutin’ off all his pehrsonal religious beliefs in this seculah fahrum, n’ so this guy Hethinn goes n’ he gets a poet who’s there to say some real nasty shit ‘bout the guys since twittah wasn’t a viable option back then since medieval Iceland’s cellulah covrahge was nowhere nee’a 4G.

So this poet gets up there n’ he says loud ‘nough fahr evuhryone tah hee’ah somethin’ ‘long the lines’ah:

“The bishops a fuckin’ bitch
n’ he got pregnant,
n’ it was that douchebag Thorvald ovah there
who knocked him up
n’ so now these two dipshits,
they gottah a bunch’ah little wohrthless bastahds tah fuckin’ feed.
So why don’t they just shut the fuck up n’ go home?”

Now this is just somethin’ you did not do back then. I mean it was a majah fuckin’ transgression in medieval Iceland tah call a guy gay, n’ then tah compaihr him tah a woman on top’ah it was like pourhin’ gasoline on a fuckin’ fi’ah yah nevah even should’ah lit in the fihrst fuckin’ place. But ah‘couhrse no one had a problem with speakin’ ‘bout gays n’ women n’ like that since that kindah thing was basic’ly condoned back then the wohrld ovah.

N’ like I’ve been sayin’, Thorvald was ‘bout as level-headed as Terry O’Reilly on stehroids n’ so soon as he hee’ahs this he stahts tah throw a fuckin’ hissy fit right then n’ there on the fuckin’ spot n’ he ends up throwin’ such a mess’ah a tempah tantrum that he fuckin’ kills a couple’ah guys. But even if hashtaggin’ ‘bout his unjust vehrbal treatment had been an option, I don’t think he wouldah taken it. I mean, these ahr still dahk medieval times we’re talkin’ ‘bout hee’ah n’ so ovah-the-top slayin’ was always the way to go when you had a dispute with someone, but even though the medieval Icelandahs ahr pretty comfohrtable with death n’ muhrdah n’ all, they still don’t like the ideer’ah this murderah runnin’ ‘round the island loose, so they go n’ decide tah banish his dumb ass from the country n’ so he n’ the bishop both get outlawed n’ ahr fohrced to go all the way back to Nahway.

So there they ahr, back in Nahway now n’ the days ahr goin’ by till eventually that same guy Hethinn shows up in the fuckin’ hahbah n’ Thorvald sees him n’ follows him down a dahk ally n’ then violently murdahs him when no one else is lookin’. Now at this point the bishop finally gets fuckin’ fed up with Thorvald’s ridiculous angah management issues n’ so he decides tah just go back home tah Saxony, which means King Olaf’s now all the way back at squahre one with his whole plan tah convehrt Iceland, but you just know he’s not gonnah give up that easy.