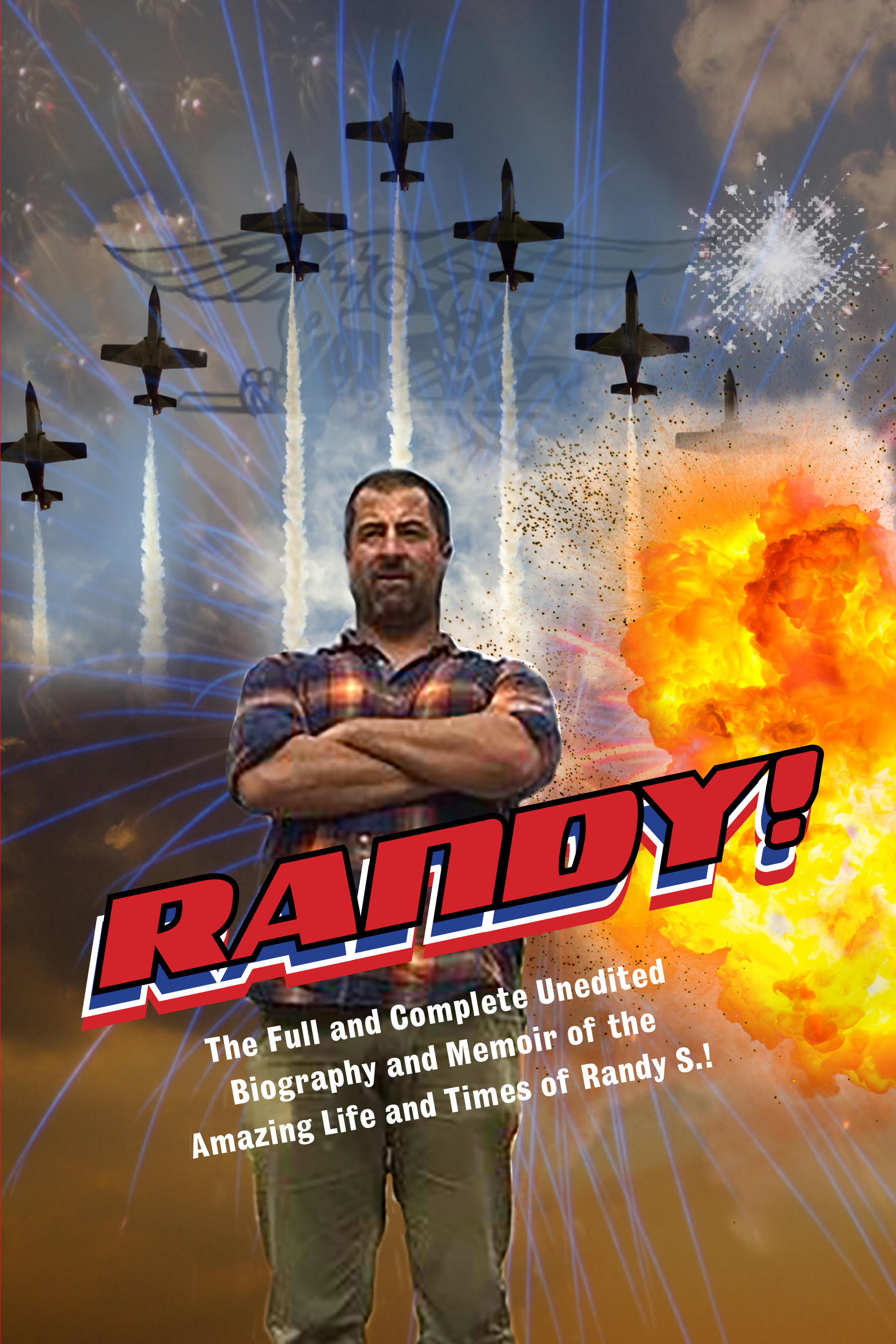 In the fall of 2017, while visiting my family in suburban Maryland, I stopped at a garage sale, in Poolesville, about thirty miles west of Washington, D.C., and purchased used, for 99 cents, a self-published biography of a local thirty-something named Randy S.

The author of the book, Noah B., was a recent graduate of the University of Maryland, with a degree in literature. Struggling to make it as a poet and fiction writer after moving back home, he noticed an ad Randy had placed in The Washington City Paper seeking out a memoirist.

The book I had stumbled upon was a modern-day version of a 15th-century biography commissioned by a Medici patron, flattering and complimentary and prone to purple prose, but with more references to the Bloomin’ Onions at the Gaithersburg, Maryland Outback.

What you are about to read is an excerpt from this book, which can be purchased here.

I hope you enjoy.

“Randy! It’s Randy! You are live on Sports Junkies!” says the voice coming out of the stereo.

“Long time no hear!” announces John William “Lurch” Bishop, one of the show’s four hilarious, long-time hosts. “Where you been at, son?”

The four hosts laugh. Randy can’t help but laugh, too.

“Randy had one call to make from prison and he calls us,” says Eric Carlton “E.B.” Bickel. “I wouldn’t even call us!”

More laughter. Again, it’s difficult for Randy not to join in.

“What were you arrested for that time?” asks Lurch. “Taking a dump behind another old age home?”

“Or in a booth inside a Bob’s Big Boy?” chimes in Cakes. “Now there’s a daily special!”

“Or were you doo-wah-diddying in the handicapped stall at a Dave and Busters?!” asks E.B. “Dandy Randy is always on a tear!”

As with all of his live radio appearances, Randy is taping this broadcast on a cassette for posterity. He keeps all of his cassettes within a special fire-proof safe. He came upon this idea while watching a documentary on Scientology, a religion he greatly admires for their devotion to preserving the holy words of its late leader. And while Randy’s fire-proof safe is not necessarily “nuclear bomb attack proof,” he does feel confident enough in the fact that it is good to last “three, four generations.”

“How about falling asleep on top of your Hummer at a stop light? That happen again recently?” asks Lurch.

“In front of a damn elementary school!” adds Cakes. “Imagine how that looked to the parents!”

The boys explode in laughter.

Over the next twenty-one minutes, until the Junkies shoot over to a commercial for Tyson’s Rain Forest Cafe, Randy digs deep and holds absolutely nothing back, including his arrest for making love to his twenty-three-year-old escort April within a “lactation station” at BWI airport.

Randy talks of the presidential coup within his development. He talks of how he and April are not always on the same intellectual wavelength. He talks about how he recently learned that his copyright application for the 18-shooter cereal dispenser —The Cereal Killah — had been denied; seems that an inventor in Ohio got to it first. He talks of how much he misses his grandmother who raised him, Mam-Mam, more so than ever around the holidays.

“Wait? Is this the same Mam-Mam who paid for your breakdancing lessons when you were twenty-one?” asks Cakes. The rest of the gang laugh. Each is right there with Randy, boosting his spirits, just good friends, shooting the breeze, showing that they’re all in this crazy thing called life together.

Now the rest of the group provides their own Mam-Mam memories:

“Is this the same Mam-Mam who paid for your Navy SEAL training camp in the backyard when you were thirty?”

“The same Mam-Mam whose diabetic socks you were forced to buy in bulk at the dollar store?”

“The same Mam-Mam who’d pick up the phone and scream at the Junkies when you were live on the air?”

“Hey, Randy! Did you hear?” asks Cakes. “I saw your invention that sucks up bugs! I saw it on TV. I kid you not: Bugs Bee Gone. On Shark Tank.”

“I’m not kidding,” says Cakes. “Sorry, dude! Looks like your idea for the In-Sick-Dude-Size, or whatever the hell it’s called, wasn’t the first. Seems like a habit of yours!”

An explosion of laughter.

“Hey, Randy. Been fired from any temp jobs recently?!”

“I forgot all about that!” declares Lurch. “Randy shutting down the entire computer network at the World Bank?! THE WORLD BANK?! Uh-oh!!!!”

Randy, sensing it might be a good time to change the topic because of ongoing litigation with the World Bank, tells his on-air friends that he’s dreading the official start of winter, but that there are only six more months until summer, and that’s when he really comes alive… “floating on a raft at Club Seacrets in Ocean City, gripping and ripping a Whiskey Shandy, a bevvy of hot-ass Bettys waiting impatiently on the bay’s sandy shore. Club Seacrets ain’t nicknamed ‘Jamaica USA’ for nothin’!”

Randy speaks of his recent disappointing spring break experiences at Ft. Myers, Florida, and how Millennials cannot be trusted when it comes to their loyalty and dedication to partying “their A’s” off.

There is much laughter and then the inevitable grilling of Randy being arrested a few times while in Ocean City for public displays of “in-DICK-na-cy.”

And yet, as with before, it’s all done in good, familial fun.

And then the show’s engineer plays a recorded tape of an NBA final buzzer and Randy’s line suddenly clicks off.

Just like that, he is no longer on the air.

Despite the desperate attempt by the Junkies to lift Randy’s spirits, and despite the relief Randy feels after having talked to some really good friends about some very personal issues, Randy still looks a bit down.

When told that it’s very seldom he appears this sad, Randy nods. He can’t help but agree.

“I’ve prayed on it,” Randy says. “That’s what Mam-Mam would do whenever she felt down. She was religious. Jesus Christ Superstar was her favorite movie. When I prayed last night, I had an epiphany. Do you know what an epiphany is? It’s when something becomes clear when it wasn’t clear before. And—”

Randy slurs the last “and,” gives a quick gag, and falls asleep.

There will be no epiphany this morning.

Randy: The Full and Complete Unedited Biography and Memoir of the Amazing Life and Times of Randy S.!