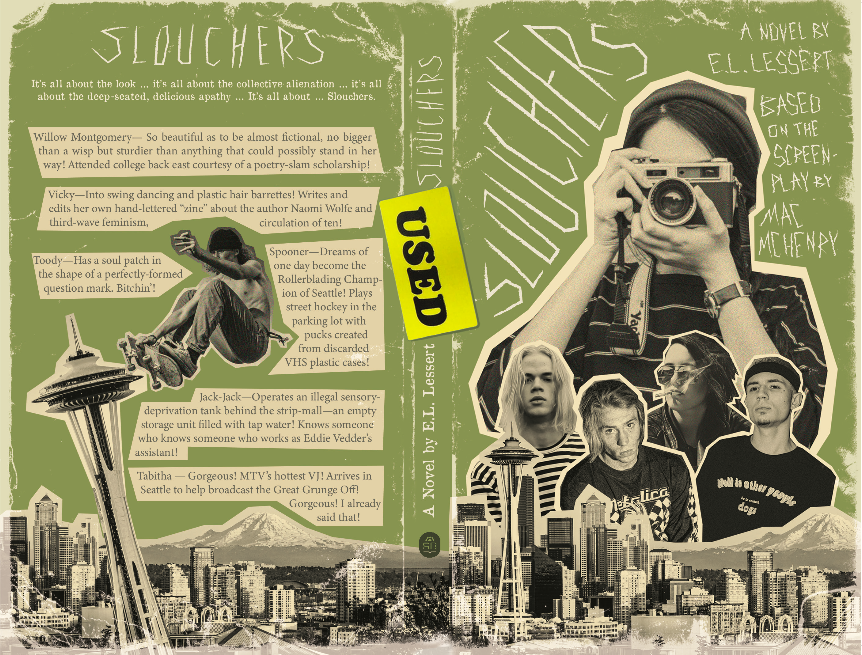 The following is an excerpt from Slouchers, originally published in 1993 to coincide with the film of the same name, and now being republished by longtime McSweeney’s contributor Mike Sacks’ press Sunshine Beam Publishing. It’s one of his favorite (little known) movies and, for better or worse, it captures — extremely accurately — what life was like for all twentysomethings in the early 1990s.

The Safe Sex party is in deep, dank Seattle swing. The Number One Vinyl Xperience is filled with hundreds of men and women dressed as various forms of birth control, not to mention first- and secondary-sex characteristics.

And lively and vibrant STDs.

It seems that everyone in Seattle of a certain age is here tonight!

Skip, the owner of the store, is dressed as one very large pubic crab. Felt pincers. Plastic antennae. Ping Pong balls for eyes.

Skip is twenty-nine and looks like a cross between Frank Black and Stephen Malkmus, with a dash of the wall-eyed lead singer from Radiohead thrown in for good measure.

“Top five songs about sex,” says Skip to a very attractive woman dressed as a suppurating herpes sore. She’s standing next to her friend, dressed as a bottle of Kwell shampoo.

“Hey,” says Willow to Vicky, strolling up and hugging her. Vicky is decked out as an IUD, but with factory pre-ripped jeans. “So glad you’re here. And guess what? Your hair smells terrific.”

“And I’m glad you are here,” says Vicky. “Wonder if I’ll get pushy-pumped tonight? I have a Swedish headache that needs some curing!”

“And yet I have that ‘not so fresh feeling,’” says Vicky.

Maybe it is not a reference.

“I really love your outfit,” says Vicky. “See! I told you it would work!”

It was Vicky’s idea to dress Willow as descended testicles.

Actually, Willow is dressed as just one descended testicle.

The other testicle remains ascended because it’s too difficult for Willow to walk with both scraping the floor.

“Have you been watching the door?” asks Willow.

Willow is no bigger than a wisp but sturdier than anything that could possibly stand in her way. More than merely beautiful… beautifully obtainable. Her name is Willow.

I already said that.

“I have, yes,” says Vicky, “when not observing all the genitals and sores. Whoo boy. I think this Safe Sex party might just fall into the category of ‘better in theory.’”

Willow laughs. She can’t help it. True, her friend is not skinny and not particularly attractive but she does have a terrific sense of humor.

“Like leaving Cheap Trick on your crush’s answering machine.”

“Have either showed yet?” Willow asks. “Toody or Mr. Straight?”

Vicky has slept with five of the actors. And three of the actresses. And the director. And the producer, a sixty-three-year-old logger from Takoma named Burt.

“Buried under a layer of insecurity and shyness masked with pathetic lists, he’s not such a bad guy,” says Willow about her boss of five days.

“You really think so?” asks Vicky.

At the entrance to the store, Toby the Wonder Pooch is resting. He barely looks up when Toody enters. Not that he can. The poor thing is made to look exactly like a cock ring.

Behind Toody comes Mr. Straight. He also steps over Toby.

Toody arrives first. Toody is the lead singer of a grunge band called That’s Your Problem.

They definitely swing on the “flippity-flop”!

“Huh?” Toody asks through the super-fuzz distortion box which he carries around with a shoulder strap.

He gently strokes his soul patch. Granted, it does look like a vagina. He has one yellow ear plug inserted into his right nostril. As hard as he’s working it, this trend has yet to catch on.

“I forgot I had to dress up. Would rather be practicing.”

“Practicing what?” asks Vicky. “You guys do nothing!”

“Nothing?! We grunge prance! Not as easy as it looks. Hey, Willow! What are you dressed as? Two sweet yams with the sprouts still attached?”

“Um, no actually—” starts Willow before being interrupted by the arrival of Mr. Straight.

His cologne arrives before his actual presence.

He’s wearing his typical business-appropriate outfit, save for a funny looking tie.

“I love your tie,” says Vicky. She shoots a look over to Willow as if to say: See? I told you they would both show. Now what are you going to do?

“Thanks!” says Mr. Straight. “It’s made out of condoms. They’re just taped on. Didn’t know what else to do.” His hand reaches out to Toody. “Hi. My name is Kevin. It’s nice to meet you. I didn’t see you yesterday at Bean There Coffee.”

The Bean There is the only coffee house in town where everyone born exactly between 1964 and 1983 can sip their caffeinated libations in ceramic coffee mugs so large they have their own tidal currents.

Vicky breaks into the theme song to The Twilight Zone. She does this whenever a situation becomes unbearably awkward.

Especially with the great MTV Grunge Off coming up …

“Are you a music exec?” Toody asks. “Cause you look like one.”

“Ha, no! I’m just working on finance matters! In a regular old office downtown. Nothing too rock and roll, I’m afraid!”

“So what do you stand for?”

“I… I don’t understand the question.”

“What I’m asking,” says Toody, adjusting his ear plug in his right nostril, “what I’m asking is this: greed. Is it good?”

“I believe that an open market creates the most fertile soil for a nation to grow and prosper,” says Mr. Straight.

Toody looks confused. “I’m just asking if greed is good. Yes or no.”

Mr. Straight smiles. “And what might your opinion of the Keynesian economy philosophy be? An increase or decrease in government expenditure?”

“Nice to meet you, too,” says Mr. Straight. And then, turning to Willow: “Dinner after this?”

She smiles at Mr. Straight. Toody catches it.

“I see,” Toody says. “Gone over to the dark side. Where you two headed?”

“Not sure yet,” says Mr. Straight.

“I was just about to ask you, Willow,” says Toody, “if you’d like to come out with me for some grub.” He bats his eyelashes.

“Not sure about tonight, Toods. Why all of a sudden available? I thought you had practice later?”

“Was thinking before practice,” says Toody. “But you know what? Go fuck your new friend. What do I care?”

Willow, Vicky and Mr. Straight watch Toody strut away. Where is he headed? What does he have planned?

He really is a good strutter, admits Vicky to herself. Maybe he does have that special X Grunge Factor.

“His name is Toods?” asks Mr. Straight. He seems more bemused than annoyed.

“Toody. But I call him Toods.”

“I don’t know,” says Willow. “We’ve been going out for over a week… but these past few days have been a little… rough.”

“Why didn’t you tell me about him earlier?”

“Earlier when? We just met.”

“Things move fast in Seattle when they have to,” mumbles Vicky.

Willow performs an exaggerated shrug. She’s been practicing. She hopes she nails the insouciance she wishes to achieve. It’s not as easy as Toody makes it out to be.

Mr. Straight says: “Willow, I think I mentioned Lè Chic last night. I hope this isn’t too forward but—”

He pauses. He wants to get this right.

I masturbated to an image of you while on the way over here.

Even someone as artsy as Willow wouldn’t fully appreciate that.

“Willow,” Mr. Straight says. “I hope this isn’t too forward but I did take the initiative to make a reservation at Lè Chic on my cellular car phone inside my car on the way over.”

“I… I don’t know if I can,” Willow says, searching the party for where Toody strutted off to.

“Think about it,” says Mr. Straight.

Feedback can be heard over the store’s speakers. All turn to the front, by the door, where Toody stands before a microphone stand.

“Poetry slam!” Toody says into the mic, taking it out of the stand. “Me versus that guy!”

He points to Mr. Straight.

“He’s challenging you to a poetry slam.”

Willow can only smile. She knows all about poetry slams, as she attended college back east courtesy of a poetry-slam scholarship.

Toody launches right into it.

“Speaking the truth,” someone mutters.

“You feel what I’m sayin’? I’m not playin’! I stand like a boxer at weigh-in! Come on and take a punch! But, I tell ya, I got a hunch! You running away like a chooch, ‘fraid of this crunch!”

Toody drops his mic. He seems very pleased with himself.

Toody takes a much deserved bow.

“Well, if you wanted, you could respond,” says Willow.

Mr. Straight shrugs. He walks over to the mic stand and picks out the microphone. He clears his throat. And launches into it: “It’s quite simple, really. What we have here is a very desirable, very beautiful, very intelligent woman—”

He points to Willow.

“And two men who are competing for her hand. One appears to have slithered forth from a swamp. The other is new to this… world, but is more than willing to learn. And willing to put in the time. That’s all I have to say. Have fun.”

Mr. Straight carefully places the mic back into the stand.

There’s no applause but Vicky and Willow exchange a look: It’s official. The first poetry-slam performance to ever feature the word “slithered.”

Not bad, Vicky shrugs. Maybe this guy’s straightness isn’t such a liability… maybe it could inadvertently work…

Willow looks around for Toody’s reaction. Where is he? He couldn’t have left so quickly, could he? — no, there he is. In the corner, flirting with an adorable syphilitic foreskin.

To be a fly on the wall for that non-conversation. …