The 2007 bursting of the housing bubble taught us the hard way: sometimes, just when you think something is poised for growth, it turns out to be overvalued and crashes precipitously. That’s why I have to ask, in light of the fact that Kevin is now a college graduate with a clear shot at his dreams, is Kevin, maybe, overvalued and going to crash? What I mean to say is, are we in a Kevin bubble?

Unfortunately, there’s no way of knowing. You see, the fear of collapse is a catch-22. Either there is a crash, or you spend the rest of your life anticipating whether there will be one soon. Isn’t finance fucked?

Here’s why the Kevin market looks promising to some investors:

Sounds pretty good, huh? But is it… too good? Any amateur economist knows that the surest predictor of weak fundamentals is a meteoric rise, and if getting six kills in a single Fortnite game while wearing almost-sweet pants isn’t meteoric, then I don’t know what meteoric means. Aren’t meteors the things that burn to ashes in a fireball?

Let’s break this down by looking at some numerical indicators, starting with the simplest, age. Data show Kevin is 23 and steadily climbing. In fact, since Kevin’s initial public offering in 1995, when he entered the market at a valuation of 7 pounds, 6 ounces, he’s seen growth of one year per year almost invariably. The only exceptions to that trend came at age 18, when, according to Kevin’s ID, he apparently became 22 (and a New York resident) overnight. And then also three years later, when he weirdly dropped back down to 21 in a play that earned him not a single “happy birthday” from the local bar bouncer. 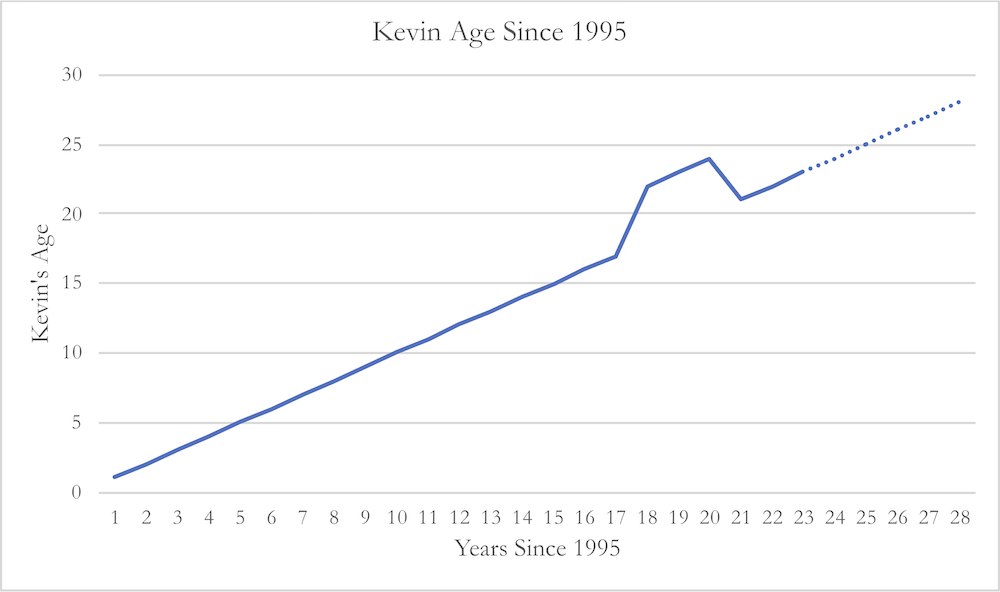 So, yes, he’s getting older and seems unlikely to stop. Is that a good thing? On the one hand, age generally indicates wisdom, maturity, and success. On the other, it’s also been linked to death. That’s known as a “global collapse.”

Cash flow is another confusing indicator. Decent amounts of cash are flowing into the Kevin market, but then again, so are multiple cappuccinos per day. Talk about liquid capital. Also, Kevin lives in a doorman building in Manhattan despite repeated assertions by his financier neighbors that his salary is such to require he open doors manually. Kevin tells those neighbors that if they don’t like his financial decisions, then there’s the door, and there’s Tim, holding it open. Thanks, Tim!

Remember, Kevin isn’t in this for money. He’s an aspiring writer, so the market really lives or dies with writing growth. So, let’s talk about the writing-related fundamentals. Well, talking about writing is up by about 80,000% year over year. Amazing gain. Actual writing progress as of yet has been elusive, suggesting a gross overvaluation of Kevin, but a spokesman has placated nervous investors by reminding them that “this stuff takes time! It’s a long slog, and our day job takes up most of our time, but we’re building our portfolio and learning a bunch.”

Two leading bulls of the Kevin market are his parents, namesake owners of the John and Francesca Lawson Foundation. These two stalwarts have employed an aggressive investment strategy to say the least, having sunk two decades’ worth of savings into the market. Despite all that investment, it seems at this point they’ve received no dividends – literally zero – except for some lame birthday gifts (a fancy pen? Really?). One would hope this is more of a passion project for them, something they’re innately emotionally tied to for arbitrary biological reasons, but you really should keep emotion out of an investment.

They’ve spent a lot of time convincing friends of the market’s burgeoning excellence in a manner reminiscent of Charles Ponzi himself. Take their support with a grain of salt, though – they’re currently under investigation for a major conflict of interest, as they each own half the market and seem to be trying to manipulate investment. If that doesn’t work, we may see them shift strategy and begin pushing funds towards their other major investment field, Patrick. Patrick is Kevin’s brother. He’s getting his Ph.D. and seeming like a considerably safer long-term bet than Kevin, who’s foregoing further education in favor of, I don’t know, is he writing jokes? Is that what he’s doing? Like, standup? Oh, scripts? Spec scripts? What the hell is a spec script? You mean like fan fiction? Uh oh.

Not everyone is as optimistic as the Lawsons. A few noteworthy detractors studied Kevin at famed educational institution Harriton High School. After four years of analysis, they publicly deemed Kevin “weird” and “not invited to this party” and “unlikely to exhibit sustained growth due to tenuous fundamentals.” These bearish statements caused Kevin to dip into a recession (it wasn’t bad enough to label a depression… it just kind of went away with time).

So, should you be investing in Kevin? As with any young market, there can be no consensus here, and the only safe strategy is to bet in both directions and then, whatever happens, be very vocal about having called it. Maybe he’ll grow into a fundamental macroeconomic player. Or maybe he’s already overvalued and is poised for a flameout. Honestly, just flip a fucking coin.