Let’s talk some more about the Boy Scouts Merit Badge in Atomic Energy. As the tens of you who read my last column know, the Boy Scouts of America used to offer a merit badge in atomic energy. The badge was first introduced in 1963, and discontinued in 2005 when it was replaced with the not nearly as cool sounding Merit Badge in Nuclear Science.

The next chunk of merit badge requirements involves making things that you would probably never make outside of an elementary school classroom. That kind of makes them awesome. And crafty. Crafty awesomeness. Let’s get started!

Construct three-dimensional models of the atoms of the three isotopes of hydrogen,1 showing neutrons, protons and electrons. Use these models to explain to your merit badge counselor the difference between atomic weight and atomic number.

Here are my three-dimensional models, or rather, a photo of them. I made them out of Mardi Gras beads (because I live in New Orleans and they’re our state gem), hot glue, construction paper and a sparkly marker. 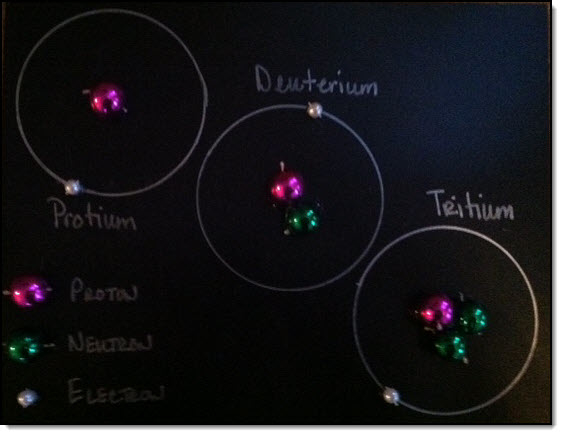 Hydrogen is the only element with names for each of the isotopes: protium (one neutron), deuterium (two neutrons) and tritium (three neutrons). Isotopes are atoms of the same element that happen to have different numbers of neutrons. Why? I don’t know. They will always have the same number of protons and electrons, that’s kind of what makes something a particular element, but the number of neutrons can change. Neutrons are kind of like filler material. Basically they’re like The Professor and MaryAnn on the first season of Gilligan’s Island when they were listed under “with” in the credits (and they had to share the same screen!) before being changed to full-fledged islanders the next season. The number of neutrons (our “with” cast members) are what change the “weight” of an atom, or the collective ability of the islanders to make a radio out of coconuts in our island example.

The atomic weight is approximately (I’m not sure how this is possible—math is math, and supposed to be exact, right?) the number of protons added to the number of neutrons in the nucleus of an atom. Hydrogen, for example, can have an atomic weight of one, two or three, depending on the isotope we’re looking at. In 1963. In the Boy Scouts booklet.

Apparently, atomic weight as a term is now controversial, and has been since the late sixties. Relative atomic mass (relative to go along with approximately, I guess) is now the preferred term because “weight” conveys a sense of “weight” and this term is supposed to refer to a force exerted on a magnetic field.

Draw a diagram showing how nuclear fission happens and label the fissionable material, all neutrons and the fission products. Draw a second picture showing how a chain reaction could be started and how it could be stopped. Show your drawings to your merit badge counselor and be prepared (ha-ha, be prepared; nice Boy Scouts joke, guidebook) to demonstrate, using simple materials, what is meant by “critical mass” of fissionable material.

Okay. First, here are my drawings: 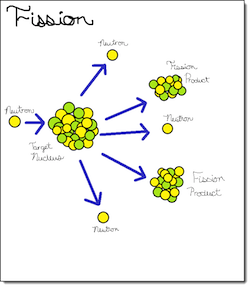 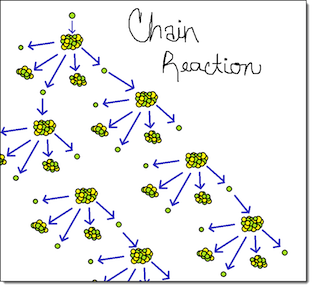 The first drawing shows fission. I have listed all of the fissionable material, neutrons and the fission products (resulting nuclei). And I should get extra points for drawing it in MS Paint. The second picture shows a chain reaction. I know it’s a bit off-center, but I got tired of drawing little protons and neutrons (and those stupid Color 1 and Color 2 boxes in MS Paint kept confusing me) so I just copied and pasted for awhile and this is how it turned out.

Fission happens when an atomic gun shoots a neutron at a target nucleus. This makes the nucleus split, creating fission products, neutrons and gamma rays (pew-pew-pew!). The free neutrons float around until they find another atom to join, which brings us to chain reactions.

Chain reactions happen when at least one of the neutrons released during fission splits another nucleus of another atom. This happens over and over creating reaction after reaction that can quickly cascade out of control. But, chain reactions can be controlled by placing other atoms, that happen to be highly neutron-absorbent (your borons and cadniums) in the mix (this is usually what the control rods are made of in a nuclear reactor). These highly neutron-absorbent atoms will likely absorb most of the free neutrons leaving the uranium that we’re probably using to only absorb a controlled number of neutrons, ensuring (probably) that something like Chernobyl doesn’t happen. Probably.

Critical mass is the smallest amount of fissile (can be used in fission) material that can be used to create a self-sustaining nuclear reaction. Mass is “critical” when there is no increase or decrease in the overall neutrons, temperature or power. This kind of sounds like critical is a good thing. Like the opposite of the normal meaning of the word and is confusing.

I know the requirement didn’t ask this, but fusion is essentially the opposite of fission, but still awesome. It’s what powers the stars. We are apparently still trying to control this reaction (I googled it). We have a lot of work before us if we’re to make the 2015 deadline Back to the Future has placed upon us with its use of Mr. Fusion in everyday life.

Here’s a picture of fusion: 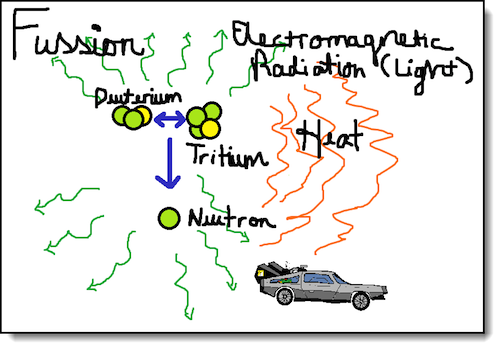 You guys: These are all important people in the Atomic Energy Village (I’m lobbying for this to become a new Epcot pavilion), but mostly, I want to tell you about Marie Curie. I. LOVE. HER. You know how some people collect t-shirts for their favorite band? I collect them for Marie Curie. Even though she was around well before the Atomic Age, the Atomic Age very well may not have existed without her. Not only did she name radioactivity (how cool is that?) she kind of knew everyone. She is basically the Kevin Bacon of nuclear science.3

Not only did Marie name radioactivity. She and her husband discovered polonium and radium (what have you been up to lately?). She won two Nobel Prizes, the first woman to do so, and one of only two people to win the prize in two categories.

Now, Marie was a very important woman in science and although that was a super quick not even abstract amount of information about Marie’s contributions to science, I’m going to leave it at that because my real fascination with Marie comes from her honest to goodness real personness. And the drama. Lots and lots of drama.

Marie’s life outside of science was the stuff of Lifetime movies. Or maybe a bit classier than that: a Gothic novel.

First, Marie worked as a governess for a wealthy—somehow related to her—family. She fell in love with their son, Kazimierz Zorawski, whom I call Kazi. In classic romance style, the family forbade a relationship between the two, because of Marie’s lowly status.4 Not surprisingly, Marie was fired from her position and sank into the second great depression of her life.5

Heartbroken, she moved to Paris, where she eventually earned two degrees from the Sorbonne while living in Les Mis-level poverty.

After graduation, Marie worked as a laboratory assistant, sharing research space with Pierre Curie. Marie and Pierre fell hard for each other. Nerd love! Their relationship was this crazy, beautiful confusion of love and science. Their handwriting mingled in their research journals. They kept a vial of radium salts on their bedside table. I imagine them making love in their eerie glow. Am I a pervert? The press loved their relationship, likening their love to a fairytale.

The two married, made great advances in science, including winning a Nobel Prize, and had two daughters before Pierre was trampled to death by a horse-drawn carriage. It ran over his head, crushing his skull. It was a pretty gruesome scene, and absolutely the stuff of Gothic novels.

A year or so after Pierre’s death, Marie fell in love with one of Pierre’s ex-students, Paul Langevin. He was married! It caused a huge scandal! It was in the tabloids! Their affair was such a passionate ordeal that Paul even fought in a duel over of it. The scandal was so crazy that it was “strongly suggested” that Marie not travel to accept her second Nobel Prize. But, Marie was like “f-that” and accepted the award anyway. Paul eventually secured a divorce from his wife, but it was too late for their love. Although things didn’t work out for Paul and Marie, in a strange twist of history, Marie’s granddaughter Hélène (Miss Fancy Pants and her accent marks there) ended-up marrying Paul’s grandson, Michel. Crazy!

Marie did lots more science-y stuff, particularly with X-rays and was probably the most famous woman in the world during World War I. She raised her daughters and continued her research until dying in 1934 of aplastic anemia from her years-long exposure to radiation. Radiation always wins.

Wouldn’t that make a great Jane Eyre-ish novel or a Lifetime movie? The only thing missing is a madwoman in the attic, and I think we’ve got a perfect candidate in Paul Langevin’s wife, which sure, she probably wasn’t really in an attic at any point during their affair, but whatever—artistic license.

Only one more requirement left! And it’s a doozy. We’ll handle it next time.

1 I know. There are seven isotopes of hydrogen now. But remember, we’re playing fast and loose with 1963 rules here.

2 The Boy Scouts have completely done away with the people identification part of the requirements as of 2011. This makes me sad.

4 It is said that Kavi never got over Marie. As an old man he was often seen sitting outside the Radium Institute staring at the statue of Marie. Sigh. That’s love, my friends.

5 The first came when she couldn’t continue her education because she was a girl; damned separate spheres. She got over her first depression by attending a secret school that admitted girls.