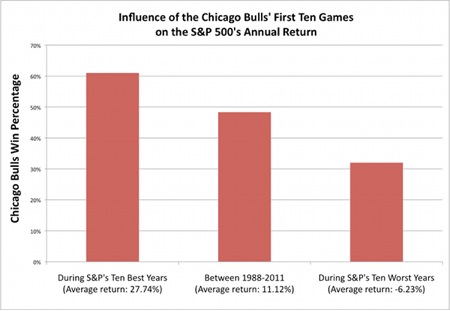 2011 wasn’t a highlight year for our leaders in Washington D.C. and Chicago. In fact, last year was so rife with poor policy decisions, the stock market barely managed to finish where it started, and the Chicago Bears went from virtual wild card lock to unmitigated failure. Oh, maybe it’s not fair to blame the spasms and jerks of the stock market on a handful of individuals wielding the blunt policy tools afforded to them. But, then again, the S&P 500 did lose approximately 4% of its value due to the wholly unnecessary debt crisis hullabaloo. Similarly, considering the injuries to key personnel at quarterback and running back, maybe it’s not fair to blame the Chicago Bears ownership for losing five games in a row against mostly sub-par competition. But, then again, the Bears defense did give up 38 points to the Seahawks.

And yet, I’m hopeful—hopeful for our country’s economic recovery and Chicago’s postseason possibilities in 2012 because a few key decisions have been delivered like a bundle of belated Christmas gifts. Firstly, as advocated in the previous column, Jerry Angelo has been relieved of his duties as the Chicago Bears general manager. This bodes well for 2012’s round of draft choices and overall market stability. Secondly, as was also advocated in an earlier column, the NBA season is finally underway. The Occupy movement has subsequently tapered off, setting the stage for a peaceful return to prosperity. And finally, the Chicago Bulls are off to their best start since the 1996-1997 championship season. This is good news for American investors because a fast-starting Bulls team has traditionally been a leading indicator for a bull market.

Admittedly, the stock market is a tricky thing, and proclamations regarding its movements are often specious. Many pundits on television networks such as CNBC and Fox Business, for example, either use the market’s behavior to explain a talking point or use a talking point to explain the market’s behavior. Both tactics take advantage of the generally random nature of stock prices and the short attention span of viewers. The networks can get away with it because, well, who’s going to stop them?

That’s why it’s important to consider the broader historical context before asserting a grand correlation between the stock market and anything else. The link between the S&P 500 and the Chicago Bulls is a great example of one such correlation rooted in historical data. Between 1988 and 2011, the S&P 500 had an average annual return of 11.12%. During that same time period, the Chicago Bulls won 48% of their first ten games of each season. And this makes sense: average basketball performance yields average annual returns. One would therefore not be surprised to learn that the S&P’s ten best years since 1988 were preceded by the Chicago Bulls winning 61% of their first ten games. The other side of the coin, of course, is that during the S&P’s ten worst years, the Bulls won only 32% of their first ten games.

Which brings us to this year. Through ten games, Derrick Rose’s Chicago Bulls have gone 8-2, good for an 80% win percentage. (They currently stand at 15-3, an .833 clip.) The last time Chicago won that many games out the gate, the S&P rose 33.36%, and the Jordan-led Bulls stormed their way through the NBA season, finishing with a regular season record of 69-13 and ultimately winning the NBA championship in six games against the Utah Jazz. The resemblance between then and now is difficult to deny, and the stock market looks to be the benefactor of this turn of events. Indeed, the Bulls’ quick start coincides with another leading indicator: job growth. In December of 2011, 200,000 jobs were added to the U.S. economy, driving the unemployment rate down to 8.5%, the lowest in three years. With signs like these, many economists have understandably become quite optimistic.

With the Fed unlikely to raise interest rates until 2013, a new Chicago Bears General Manager at the helm, and an NBA season in full swing featuring a fearsome Bulls team anchored by MVP Derrick Rose, it seems fair to predict a major positive jump in the stock market’s value. However, the economy at large still has to absorb the damage done by our political and athletic deciders in 2011. Will low interest rates be enough to overcome Mike Martz’s quarterback-injuring offense? Will a well-coached Bulls team be able to compensate for a nation torn asunder by a vicious NBA lockout? Is it even possible for the stock market—much less the economy—to recover from such a devastating mid-season collapse as experienced by Jerry Angelo’s Chicago Bears?

Time will tell. But if our leaders continue this trend of uncharacteristically solid decision making, then the outlook for our economy certainly looks quiet a bit Rosier.