Inside Witnesses:
One Crime’s Many Narratives 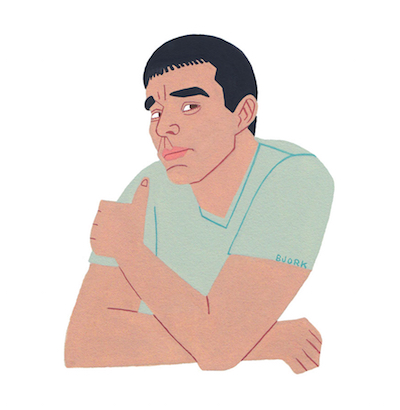 Chris and Kevin have been dating more than ten years and share a townhouse within walking distance of the Twilight Exit. I meet them at their place. Inside, their space is neither messy nor spotless, neither small nor large, neither dumpy nor extravagant. I sit on the couch, and a pair of tabby cats named Peter Pan and Tinker Bell fling themselves around the living room, which is outfitted with Mardi Gras art prints and glittery harlequin masks. When I ask Kevin how he met Chris, he mentions a delightfully trashy multi-tiered gay bar in Seattle’s trendy Capitol-Hill neighborhood. “We say we met through friends, but actually it was outside R Place,” Kevin says.

They’re a well-matched pair. Both are clean-cut, cute-faced, trim-bodied guys who look to be in their late 30s. Chris is a software developer with tan skin and thick, dark eyebrows. His voice is soft and has a pleasantly gauzy, far-away quality. Kevin manages a grocery store. He has a square-shaped jawline and hair dyed white-yellow blonde. He wears it slicked back just so. As I observe their dynamics, Chris seems to be the talker in the relationship, while Kevin is more watchful, springing up now and then to tend to the various small errands of the living room. The night of the shooting, “I’d posted on Facebook that I was going to the Twilight to see if any friends would wanna come,” said Chris. “Later on, I was kinda thinking about not going, but then I felt like I had to go since I’d already announced it, in case the friends showed up. None of them did. I guess that’s good for them.”

Chris and Kevin’s night had been going pretty well. They’d ordered food, got a couple drinks, chatted a little. As Chris picked out a karaoke song, he sent out a couple texts. “It was stuff to get some people to come out, like, ‘You’re missing the tater tots you know.’ I remember I asked my coworker, ‘Are you still up for the Twilight?’ and he said no, so I go, ‘OK loser.’ Then I sent him another one. I was trying to lure him. It said, ‘OMG. Peanut-butter bacon burger & tots!’” said Chris.

“Do you remember when they used to have deep-fried bacon? It came with a side of gravy. White gravy. It was hilarious,” I said, but the guys hadn’t tried it. “It sounds awesome,” said Kevin politely, and then we get back to our story.

Kevin and Chris had been in the bar maybe a half hour when James shot the bouncer Greg in the alleyway, “I didn’t know anything about it, nothing. But that’s not surprising,” said Chris. His personality has a certain dreamy quality, which he references now and again. “I’d been called up to sing. My song was “Better Be Good to Me” by Tina Turner. I hadn’t performed that one since moving here from Wyoming in 1998. After I finished I was walking back to my seat. The karaoke guy hadn’t even called up the next singer yet. Just as I was sitting down I heard a pop, and I thought it was a balloon. I guess you don’t really think it’s gonna be anything else. But then I saw Kevin slide under the table.”

“I think it’s because of where I was facing, towards the alleyway door. The things were happening over there,” said Kevin. The sound was so jarring, “everybody just sort of stopped and looked at each other. Usually I don’t assume the worst. But then we heard somebody screaming, a male. I think it was the doorman. He was screaming in pain. It looked like the people sitting closest to the door were the first to recognize that this was not a balloon. People started moving, you could hear chairs scooting, everybody got under a table. Things kinda slowed down,” he said.

“People were, like, hitting the floor,” said Chris. “I was lying there, trying to figure out what was going on, and what I should be doing. I saw a man walk in. He had a very purposeful walk.” Later that night, Chris would describe James’s appearance in his police statement. “You know, I just have a terrible memory anyway,” Chris told the detective. “Somebody in their twenties. I think he was wearing a white polo shirt. He may’ve been black, but I’m not totally sure,” he said. Kevin gave his statement exactly thirty minutes later. The shooter was “white, mid-twenties, 5’8”, white shirt,” he said. Kevin told me, “He just looked like your average guy. But he had a gun, a big gun. And he was kind of holding it up.”

“I was trying to, like, melt into the floor,” Chris said.

“Nobody was talking. It was dead quiet. That was the quietest I’ve ever heard a room. We were all taking in what was going on. I was afraid if I rustled I’d be the only sound,” said Kevin.

“I can’t say I remember anything about his appearance. His demeanor is what struck me,” Chris said. “I didn’t see that he had a gun specifically, but I thought he might’ve been the shooter, just by the way he was carrying himself. Here in all this chaos is this one person walking very directly towards the bar. He seemed so determined.”

As James moved past the dining room and into the lounge around the corner, Chris waited, gathering information. “At first, I couldn’t tell if he was coming in just to cause mayhem. Was he gonna shoot anyone he saw? Was he gonna be a threat to me? But pretty immediately I jumped to: He is going after somebody, and I have nothing to do with this,” he said.

“Somebody indicated the emergency-exit door that faces Cherry Street was open, and people were saying, ‘Get out, get out,’” said Kevin.

“I did this really quiet, backwards-shuffle crab walk, so I could keep my back to the door and my eyes on the room. I thought Kevin and I both went out the door at the same time, but I lost him. He must’ve gone a different direction. I ran straight across the street to the barbeque place,” said Chris. The Barbeque Pit is a brick building with a hand-painted facade giving the illusion the restaurant is being consumed by fire. Climbing the walls and windows, some flames look like scribbles, others have serrated edges and candy-corn gradations. Mounted along the roof, giant signboard cut-outs represent a couple patches of fire, all blobby and giant and billowing up.

“There was one other guy standing against the front of the building. I ran up next to him, and we stood together for about twenty seconds. I was trying to think. My thoughts didn’t make sense, but I kept turning them over. ‘Why am I here? What if we shouldn’t be here? Why are there two of us here?’ It was like I was gonna try to solve the problem using whatever clues I had,” said Chris. “Then the guy just takes off running. I didn’t even know who he was, and I was a little paranoid, so I didn’t follow him. So now the street’s empty.”

“I think I was still in shock and not really thinking straight, because I should’ve just ran. But I kept thinking about the guy with the gun. I knew he was still in the bar. I was worried about what would happen when he tried to leave. I’d heard two shots go off right as I was getting out. But there hadn’t been a shot in a while, so there couldn’t have been any reason for him to stay inside. I knew he hadn’t come out yet, because I had a view of both doors of the bar where I was. I was thinking he would come out any second. I didn’t want to be running on the street when that happened. I didn’t think he was gonna shoot me unless I startled him or did something weird, but I wanted to be sure I was far out of his way. ”

Right next door to the barbeque joint, Chris noticed a well-kept residential building. As Chris wandered a few steps closer, he paused, considering its metal fence. “I was trying to figure out if I should climb it. Then this guy comes out, stands by the gate. It’s locked, he’s on the other side. He could’ve opened it. He asked me what was going on, and I told him a guy had come into the bar with a gun and shot someone. I said, ‘I’m kind of stuck.’ I’d indicated I was trying to get away. I was hoping he would let me in, but I didn’t want to seem panicky. He just stood there. It was clear he was disengaging. He said ‘Good luck, man,’ as he walked away.”