Some caddies busy themselves inside the shack.

Jenny got the members to fund a lending library, which is housed in an antique cabinet that was donated from the clubhouse and sits against a wall of the shack. Jenny unlocks it after the morning printout and spends time labeling and cataloging new books and going after delinquents who owe late fees.

The library has a lot of standard high school fare, as well as golf books and the whole set of books written by golf course architect F.W. Bergmann. His three-volume, self-published autobiography, Against Mediocrity, is in there, and is often browsed but rarely read. Bergmann used to be a caddie at the golf course. He grew up on a nearby farm at the start of the 20th century but worked his way into becoming a media baron. When the original course went bankrupt in the Depression, he bought the land and the club and turned it into his own solipsistic architectural fever dream, his Xanadu, his Domain of Arnheim. The mansion he built on the property is designed like the Tower of Babel in the Brueghel painting and, for a long time, was the tallest structure in the suburban area. He built it, according to Volume Two, as, “an affront to God for stealing the woman I loved.”

One of the quieter young caddies is called Lunchbox. He got that name when his mom sent a lunchbox with him on his first day. He’s really into scale model replicas and has been building a miniature of the shack for a couple months. It’s on a 1:20 scale. He even built a miniature action figure version of himself in the mini-shack building a model of the model.

Some of the caddies play board games, like Risk or Chess or Go. In the ‘90s a couple caddies made a board game about caddying called Loop. The goal of the game is to earn the best possible tip from the member you’re caddying for. It’s for one to four players.

Sometimes in the afternoons you’ll see a young caddie waiting to be picked up after his round. He’ll be in the shack alone, playing Loop as a single, sweaty and sunburned and glazed, sipping a Hawaiian Punch he got from the vending machine, his lips stained red.

On one wall of the shack are a bunch of educational posters. Somebody did a Powers of Ten sort of thing and put up a poster of the Universe, the solar system, the earth, the U.S., the Midwest and so on down to a map of the golf course and an overhead illustration of the shack.

R. Jerry Light, or JerBear or RJ, is the most financially astute caddie. His favorite movie is Wall Street and his preferred genre of books is Warren Buffett biographies. He hasn’t discovered Ayn Rand yet, but he will. He created a caddie insurance system and a caddie betting system. The idea of the insurance system is to help you out in case a member or a guest stiffs you. The betting system lets you wager on whether a caddie will earn more or less than their average tip, or by how much, or whether the group of caddies will come out ahead or below their average. All the indemnification and premiums and wagers really don’t make any money for anyone except Jerry, but he runs a nice system with an elaborate scoreboard of current rates and averages and odds, and he prints out official-looking stubs and policies and betting sheets. He puts on a green visor as he does all this and it makes the time pass.

On another wall of the shack is the caddie Hall of Fame. It’s built around this photo: 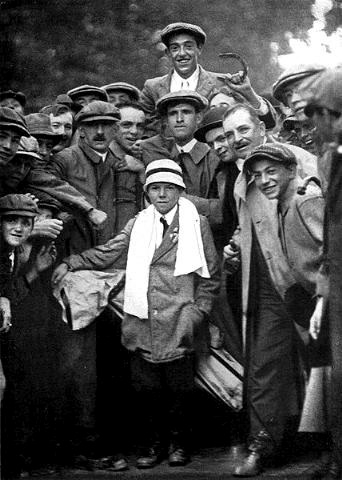 That is 10-year-old Eddie Lowery caddying for 20-year-old former-caddie Francis Ouimet at the 1913 U.S. Open—a real Horatio Alger moment for caddying in America. The photo reflects most caddies’ vain self-importance, as dapper young Lowery, the caddie, is in the foreground and Ouimet, the underdog U.S. Open champ, is lost in the background propped on somebody’s shoulders, holding onto a horseshoe.

The photo on the wall is surrounded by embroidered nametags ripped off the Plus caddies’ jumpsuits. There can only be five Plus caddies at a time, voted on by the members and Clam and the pros. Most Pluses get chosen when they’re sixteen or seventeen and do it for three or four years. The club gives you a tailored, full-length jumpsuit as your uniform, like you see on the caddies at Augusta National during The Masters tournament. But once you take a summer off—for an internship or whatever—you have to return to being an Honor caddie. All the former Plus caddies have cut out the name patch from their jumpsuits and pinned them around the Lowery photo.

Some of the caddies who are waiting around leave to get breakfast. One rookie—Andrew, or Timmy Tourette’s as he’s been called since a violent and staccato swearing outburst he had after striking out in softball—he jogs down the street to the Starbucks and buys a double-shot café mocha. He’s in eighth grade and is really into apocalyptic lit like Children of Men, The Road, and Fallout 3 and is obsessed with end-of-the-world scenarios. By the time he gets back to the shack carrying his Starbucks with two hands he’s frayed and buzzed and twitching. His talking gets on everybody’s nerves, especially the shack bully Big Tom Wrigley, or Wriggles, who’s tall, fat, freckled and loud.

One day, a couple caddies were looking at a newspaper and talking about a photo of refugee camps in Pakistan. They tossed the paper on the ground and Timmy looked at it and started talking.

“Did you know there’s something called the Doomsday Equation and it was made up by this guy named Heinz, Heinz von Foerster. And he was born in Vienna, and then he came to America in 1949 and worked at the, at the University of Illinois at Urbana-Champaign. Heinz von Foerster published an article in a, in a 1960 issue of Science magazine suggesting that, that world population growth will become infinite on Friday, November 13, 2026, which would be Heinz von Foerster’s 115th birthday.”

Big Tom told him to shut the fuck up and empty the garbage can. Timmy was sitting in the corner of the patio near the trash, which doesn’t get emptied often enough and has a musk of rotten banana peels and half-eaten cheeseburgers and spilled Gatorade and stale coffee.

Timmy continued, “The population of the world is growing at a rate faster than exponential. This is what Heinz von Foerster said. The amount of time it takes for the population to double gets, it gets shorter as time goes on. On November 13, 2026 the doubling-time of the human population on earth will be zero.”

Big Tom grabbed Timmy’s collar and threatened him again. Some caddies came out of the shack to see what was going on.

“Recent research has corroborated Heinz von Foerster’s ideas. The growth of the world population is, is hyperbolic and follows a non-linear, second… second order positive feedback between the growth of the population and the technological development that increases the, the carrying capacity of a given plot of land. In the case of people consuming more resources than normal—like you for instance Big Tom—then the carrying capacity decreases.”

Big Tom opened the lid of the garbage can and dropped Timmy inside. He snapped the lid back on and said Timmy was “in the can for five minutes.”

Timmy asked from inside for his Starbucks. A fellow rookie caddie looked up at Tom, who was turned away. He cracked the lid of the trashcan. Timmy’s skinny little hand reached out, grasping. The other rookie put the cup into his hand. Timmy grabbed the Starbucks and retracted it back inside. The other rookie pressed the lid back down.

Josh called some people over. He had his PDA out. He said Timmy had already made a wall post on Facebook. He had written, “I am inside a garbage can.”

Mel, one of the assistant pros, had just pulled into the parking lot. He walked over to say hi.

Timmy sneezed. Mel asked why the garbage can just sneezed.

Big Tom said that he and Surly were actually just about to empty the garbage as a matter of fact.

They picked up the trashcan and headed up the parking lot towards the clubhouse and the dumpster.

Timmy started squirming and kicking. Big Tom and Surly lost control of the trashcan. It fell onto the pavement and started rolling down the parking lot, Timmy pubescently screeching from within. The can unfortunately rolled towards an unusually wide-open part of the woods at the edge of the property. It rolled through the trees, down the bank, and splashed into the creek.

Timmy screamed in his shrill way, “My iPhone got wet!”

Mel nodded his head, turned around and walked up to the pro shop.