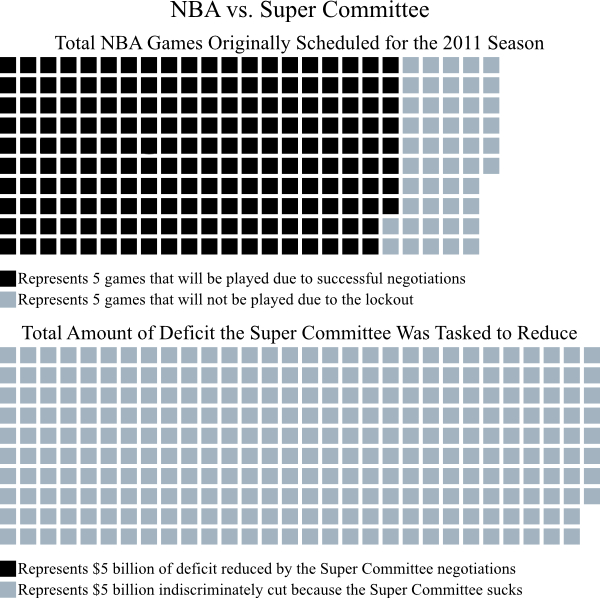 Two important events occurred over last Thanksgiving weekend. Or, more accurately, one important event occurred and another, pathetically, did not. The event that did happen: NBA owners and players reached an agreement on revenue sharing, ending the 149-day lockout and improving the chances for some sort of social pacification (see previous column). The non-event: the Congressional “Super Committee” did not reach an agreement on how to reduce $1.2 trillion in the country’s budget deficit over ten years, proving to quasi-skeptical credit rating agencies that the United States government isn’t even capable of providing lip service to fiscal sanity.

So why did one contentious negotiation end in a degree of success while the other ended in abject failure? After all, it’s not as our leaders in Congress are any worse at their jobs than our leaders in the National Basketball Association are at theirs. No, the actual problem with our elected officials lies not in their skill, but in their lack of incentive: while failure for Congress will merely result in reckless cuts to defense, education, housing, and environmental protection, failure for the NBA would have resulted in the loss of a great season of professional basketball.

Upon closer inspection, it’s a fairly straightforward process to understand why raising the spectre of a lost NBA season is such a motivating factor compared to the consequences confronted by Congress. For starters, the cost of Congress’ failure is at least quantifiable: $600 billion over ten years to our national defense and another $600 billion to non-defense spending. Sure, that adds up to a big number, but a big number is still, in fact, a number. For comparison, how does one quantify the misery induced by an entire nation (world!) missing out on Derrick Rose’s first post-MVP season? Would it be “devastating”? Perhaps, “really, really devastating”? How about, “really, really, just awfully, please, God in heaven, don’t let it happen devastating”? Fact is, while there are bounds and definition around Congress’ consequences of failure, there is no practical ceiling to the potential pain induced by a lost NBA season and the missed opportunity of a championship run by the Chicago Bulls.

The takeaway from these coincident negotiations and their dichotomous conclusions is that Republicans and Democrats in Congress need a stronger, more emotionally traumatizing incentive in order to have a chance at finding common ground. There are, of course, an infinite number of nebulous yet functionally terrifying consequences that could be utilized to spur Congress into action. For example, instead of threatening to indiscriminately cut critical social programs, the penalty for not reaching an agreement on the deficit could be to disallow members of Congress from owning dogs. Imagine the pushback on that.

However, times being as dire as they are, it makes sense to stick with what has proven to be the ultimate incentive: the threat of losing a professional sports season. In fact, only once in the history of a major professional sports in North America has a season been canceled due to a dispute between players and owners, that being the 2004-2005 season of the National Hockey League.

Just this past year, three sports leagues and their respective players associations managed to sign new collective bargaining agreements: the NFL, MLB, and yes, even the NBA. These leagues and players successfully negotiated, but it wasn’t because they liked each other. And it certainly wasn’t because their differences were slight. These owners and players managed to successfully negotiate because of the immense pressure of having an entire season hinge on their ability to compromise. Congress needs a similar motivation. The only question left is: which professional sport should be locked out until Democrats and Republicans agree to a deficit reduction plan?

Well, the NBA is obviously out of the question. Not only have basketball fans suffered enough, but it would be criminal to get in the way of a resurgent Chicago Bulls team. Similarly, the NHL has already lost a season due to a work stoppage, and the Chicago Blackhawks are also having a good year. The NFL is more than halfway through its season, so locking it out now seems both cruel and pointless, especially considering the Chicago Bears have a good shot at the wild card. The loss of an MLS season isn’t likely to cause the requisite panic. Ditto the WNBA.

That, unfortunately, leaves only Major League Baseball. Threatening America’s Favorite Pastime may seem unconscionable to patriotic citizens, but then that’s exactly the point. I propose Congress gives the Super Committee an extension. If the group can’t figure out how to do its job by spring, it will have to answer to angry baseball fans for the lost season. On the upside, the Chicago White Sox are in a rebuilding phase, so it’s not as if we’d be missing a playoff run. And the Chicago Cubs would certainly benefit from not having another losing season.