Perhaps best known for its role as “middleman” in the Central Dogma of gene expression (DNA to RNA to protein), ribonucleic acid, or RNA, is a molecule worth getting to know a little better. While DNA’s double helix has been enjoying the limelight for nearly a century, RNA’s single strand modestly awaited its turn for scientific scrutiny and its chance to award the Nobel Prize to the chemist intrepid and bold enough to give it attention.

In 1989, Tom Cech and Sydney Altman (the “Watson and Crick” of RNA) split the Nobel Prize in chemistry for finding out that RNA was no cellular slouch, and is in fact capable of forming complex secondary structures, which allows the molecule to perform tasks only proteins were thought to be capable of. Today, diagrams of RNA secondary structure can be found in most every college-level molecular biology text. And what was the first thing I thought when I saw such a diagram?

“So that’s what the aliens have been trying to tell us!” 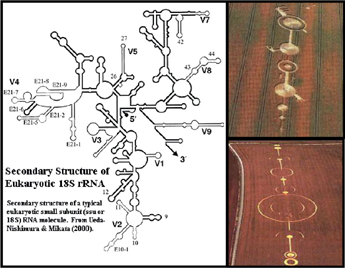 RNA secondary structures are present in any cell that contains RNA—and in many viruses as well. Could crop circles represent RNA sequences to be targeted for anti-viral gene therapy? Are they a benevolent message to RNA biologists, simply encouraging further research? Is there any money in a movie involving this convergence?

The truth is out there …

Yikes. Hmmm. Wow. Lena Webb, no less. Does make you wonder, though. Could be aliens. On the other hand, maybe it’s all just further proof, if further proof be needed, that Chris Ware is God.