(By way of a speech Mr. Rumsfeld gave before the American Legion meeting in Salt Lake City back on August 29, 2006) 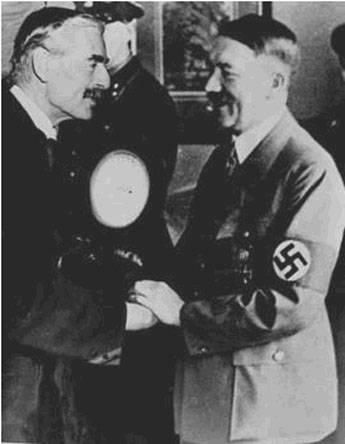 [During the 1920s and 1930s,] a sentiment took root in America that contended that if only the growing threats that had begun to emerge in Europe and Asia could be accommodated, then the carnage and the destruction of then-recent memory of World War I could be avoided.

It was a time when a certain amount of cynicism and moral confusion set in among Western democracies. When those who warned about a coming crisis, the rise of fascism and Nazism, they were ridiculed or ignored. Indeed, in the decades before World War II, a great many argued that the fascist threat was exaggerated or that it was someone else’s problem. Some nations tried to negotiate a separate peace, even as the enemy made its deadly ambitions crystal clear. It was, as Winston Churchill observed, a bit like feeding a crocodile, hoping it would eat you last.

There was a strange innocence about the world. Someone recently recalled one U.S. senator’s reaction in September of 1939 upon hearing that Hitler had invaded Poland to start World War II. He exclaimed:

Lord, if only I had talked to Hitler, all of this might have been avoided!

I recount that history because once again we face similar challenges in efforts to confront the rising threat of a new type of fascism. Today, another enemy, a different kind of enemy, has made clear its intentions with attacks in places like New York and Washington, D.C.; Bali, London, Madrid, Moscow, and so many other places. But some seem not to have learned history’s lessons.

OK, for starters, if we are going to start throwing historical analogies around, with the specter of ascribing the moral backbone of Neville Chamberlain glad-handing Hitler at Munich to anyone who might be entertaining reservations about the current Iraqi adventure, we might want to start with this photograph: 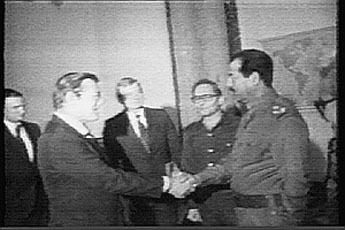 Which is to say, Rumsfeld himself enthusiastically glad-handing Hussein himself in Baghdad in December 1983 while on a personal back-channel mission on behalf of President Reagan to inform the Iraqi leader that despite U.N. outrage over his chemical gas attacks against both Iranians and Kurds (and his wider genocidal campaign against the latter)—expressions of condemnation to which the U.S. had officially been constrained to subscribe—he, Hussein, was not to take such castigations too much to heart, because the U.S. was still secretly favoring the Iraqi side in its war on Iran and would be continuing to supply the Hussein regime with massive material support.

Talk about cynicism, moral confusion, and a certain strange innocence. Not to speak of a truly conspicuous, ever so conveniently poor memory.

But, OK, leaving all of that aside:

Rumsfeld is hardly the first commentator to plant himself firmly on one side or the other of the “Is this current crisis more like the Second World War or more like Vietnam?” divide. Have we just avoided Munich, 1938, or, rather, careered right through the Gulf of Tonkin, 1964? The two sides of the argument—both implicitly barbed with an imperative “Never again!”—tend to be treated as if they were polar opposites. Historically, they have always been intertwined. Congressional approval of the Gulf of Tonkin Resolution played itself out in the long shadow of Munich (we weren’t going to make that mistake again), while the appeasers of Munich were animated by their own Tonkin-like specter, which is to say Sarajevo, 1914 (they weren’t going to get drawn back into those pestilential trenches). And so on, back and forth, into the past: after all, the hair-trigger mobilizations of 1914, too, occurred in their own context of supposedly absolute lessons historically acquired.

An odd feature of the current state of the debate is how fractured its two poles have themselves become. When people invoke Munich, they don’t always have the same Never Again in mind. Some seem to mean “Never Again should we stand by, paralyzed and indifferent, in the face of a genocidal maniac.” Others have absorbed a somewhat different lesson: “Never Again will we cave in before the threats of a bully, because doing so only makes it harder and costlier to deal with him later on.” Still others infer that Never Again can we Americans allow ourselves the luxury of curling up into an isolationist ball.

Vietnam, too, tends to get invoked in a splintering of cross-readings: Never Again should we allow ourselves to be drawn into someone else’s quagmire of a civil war. Never Again should we rain horrific, high-tech devastation upon a poor, almost defenseless people. Never Again should politicians be allowed to commit American troops to a mission without a clearly defined goal and a plausible endgame, or without having first secured the near-unanimous consent of the American people. And so forth.

The point here, however, may be that we are well past the usefulness of either of those analogical terms. Indeed, a truer analogy may be starting to stare us right in the face these next several weeks as we traverse the series of 50th-anniversary observances of, first, the Soviet suppression of the Hungarian Rebellion and, hard on its heels, the catastrophic fiasco of the Israeli/British/French seizure of the Suez Canal. 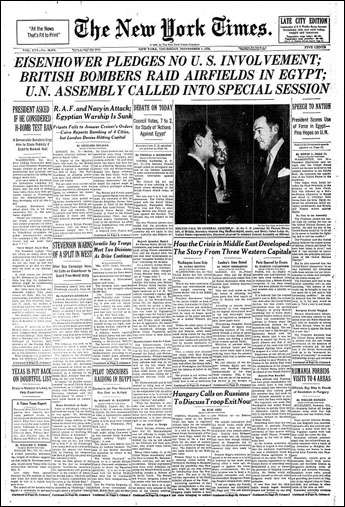 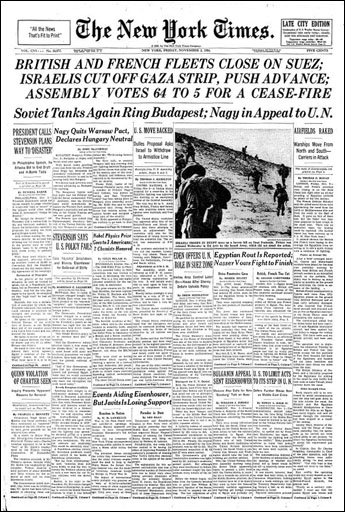 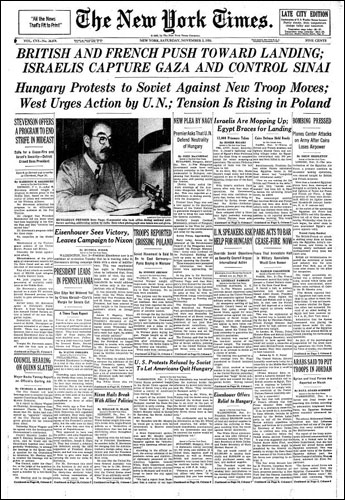 This last, alas, seeming the most pertinent: the British Empire, once unchallenged bestride the entire world, embarking on one ill-considered Middle Eastern imperial adventure too many, eventually (under withering pressure, as it happens, from President Dwight “Why We Fight” Eisenhower) having to engage in an ignominious withdrawal, its imperial pretensions in tatters. Jonathan Schell has lately been fond of noting how, of course, failure is not an option: Failure is what happens when you run out of options. And the question may no longer be “Is Iraq World War II redux or Vietnam redux?” but instead “Will history end up pegging Iraq as the American Imperium’s Suez?”

Back to you, Mr. Rumsfeld!