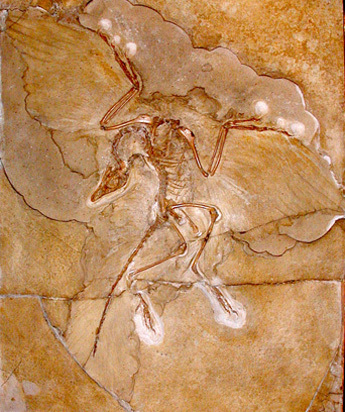 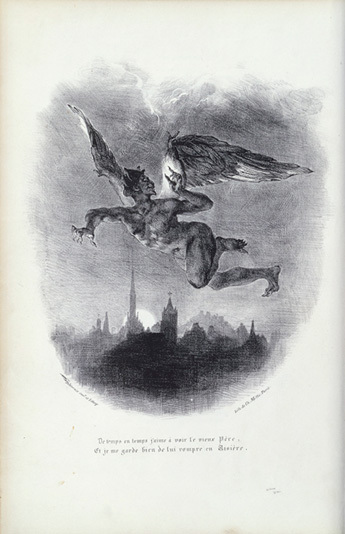 A stunning multiplicity of convergences here in the Berlin Specimen of Archaeopteryx lithographica and a lithograph of Mephistopheles in Flight by Eugène Delacroix.

Not only are there postural echoes; there are cultural and political reverberations as well. “Embedded” with these creatures’ flight paths is their shared role in complicating our notions of the holy and the demonic.

Those who, generally speaking, follow the gospel of Darwin assign special significance to the Archaeopteryx as a liminal fossil—proof of a threshold species between modern birds and their prehistoric dinosaur relatives quite literally “set in stone.” One might be surprised to note, then, that many of the websites devoted to posting images of the skeleton are not scientific but overtly anti-evolution.

It would seem that creationists have vilified the Archaeopteryx, casting it as a “hoax,” a “fraud.” What appears to be a feathered reptile pressed into Solnhofen limestone, they counter, is nothing more than a poorly designed “forgery” on par with the Piltdown skull, a conspiracy by scientists who would abuse authority for profit and personal gain.

Perhaps there is some distant ancestry to these controversies in Delacroix’s print. There, beneath Mephistopheles’ left knee, the artist has etched the distinct spires of Wittenberg’s Schlosskirche. In 1517, Martin Luther nailed his 95 Theses to the wooden doors of this fortified church, openly questioning the papacy and refuting its practice of allowing the faithful to purchase salvation by indulgence.

Wittenberg, by the way, is also where Goethe’s Faust bargains his soul away to the devil in pursuit of knowledge.

I like this one a whole lot, and not just because it provides such a welcome respite from and counterpoint to all the Christological convergences that seemed to be infesting the Contest a while back. (For one thing, Mr. Villanueva’s commentary is itself so beautifully and suggestively composed.)

Myself, I just have a few additional glosses, the first, granted, highly geneologico-idiosyncratic. I must have mentioned my grandfather somewhere among the foregoing entries—Ernst Toch, the modernist Austrian/German/Jewish Weimar émigré composer, who fled Berlin in 1933, eventually settling in Pacific Palisades, from where he proved unable to rescue fully half of his extended family back home (over 30 of whom perished in the Holocaust). Notwithstanding which, a true German Jew (which is to say someone in many ways more enamored of and entrammeled by German cultural history than the Germans themselves), he returned to the Continent a few years after the end of the war and settled for a season back in his hometown of Vienna (seedbed, earlier, of some of the most vicious of Germanic anti-Semitism), where he composed his First Symphony, a rousing, anguished, cathartic summation,

to which, in High German–Jewish fashion, he affixed a motto from deep in the bowels of Germanic history, lines from Martin Luther himself—

Although the world with devils filled
Shall threaten to undo us,
We will not fear for God has willed
His Truth to triumph through us!

—seemingly oblivious to the fact that when that ur-anti-Semite Luther invoked “devils,” as often as not he was referring to Jews!

So there’s that. And then, as Mr. Villaneuva suggests (and here I am only following his lead), there is such a rich layering of geographic and chronological coincidences embedded in this convergence. Martin Luther and Dr. Johann Faustus, the real-life alchemist and necromancer out of whose life and exploits the Faust legend would presently arise, were virtually exact contemporaries (1483–1546 and 1480–1540, respectively). Although the historical Johann Faustus himself was probably born in and is somewhat more associated with the Swabian state of Württemberg, both he and Luther were, yes, associated with the Saxon university town of Wittenberg, a fact which Johann Wolfgang von Goethe (1749–1832) may well have had in mind upon taking up his retelling of the Faust tale (the first book of which appeared in 1806, the second shortly after his death). Delacroix’s impressions of the tale were published, alongside the first French translation of the first part of the Goethe drama, in 1828. Charles Darwin conceived his theory of natural selection in 1838, though he only published it some 20 years later in The Origin of Species (1859). Almost immediately thereafter—in 1860 and 1861, respectively—the impression of a single feather and then a near-complete fossilized skeleton of the astonishing (and evolutionary-theory-clinching) Archaeopteryx were discovered in limestone quarries near Solnhofen, Bavaria, only a few miles from Johann Faustus’s old Swabian stomping grounds; the skeleton in question eventually made its way to London (the Berlin skeleton, highlighted by Mr. Villanueva, was uncovered a few years later, near the same location). Delacroix died in 1863. Three years later, in 1866, Gustave Doré included the following Delacroix-haunted, Archaeopteryx-inflected engraving of Lucifer falling out of the sky in his illustrated edition of Paradise Lost: 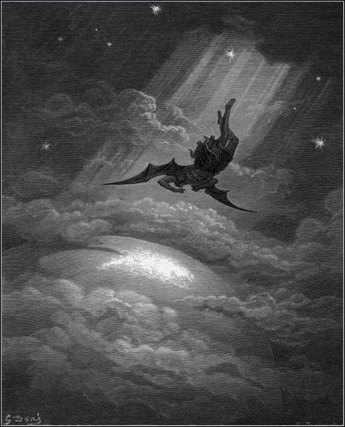 To all of which, I merely hazard two further glosses:

When Thomas Mann, in his Pacific Palisades exile, chose to allegorize the catastrophe of recent German history in novelized form (1943–47), he too had recourse to the Faustus legend, though his Dr. Faustus turned out to be a modernist composer, Adrian Leverkühn, whose devilishly complex (and, Mann suggests, devilishly inspired) compositional technique was modeled on that of fellow exile Arnold Schoenberg (as channeled to Mann by way of another fellow exile, Theodor Adorno), and thankfully not on that of my grandfather. (In fact, for what it’s worth, the copy he sent my grandfather, on 16 January 1948, bore the inscription “To Ernst Toch, who does not need the Devil, with neighborly greetings, Thomas Mann.” So, there.)

Meanwhile, more recently, when Philip Pullman took up the skein of Paradise Lost once again with his marvelous His Dark Materials trilogy (albeit a Paradise Lost heavily influenced by William Blake’s insight that, with the original, John Milton, almost despite himself, presently found himself allying with the devil’s party, such that Lucifer became the poem’s true hero, and God, if anything, its true villain), he chose to locate his epic, at least at the outset, in an Oxford nestled in a parallel universe, almost the same as ours except that in its world the Reformation—Calvin’s reformation, granted, not Luther’s—had won and a dark Geneva-based Magisterium was holding dead authoritative sway over all the world’s more lively aspirations. But the War starts up again, heroic Lucifer and his allies in a great cosmic battle, centering upon the adventures of two pubescent teens, all part of a vast attempt to overthrow the Kingdom of Heaven so as to replace it, as it were, with a Republic of Heaven. A republic, in turn, grounded in distinctly Darwinian marvel at all the splendors of this present lifeworld, in all its vividly evolutionary profusions, rather than in the flimsily diaphanous promises of any other. It will be interesting to see how many of these vivid subthemes make it clean through to the much heralded (ambivalently anticipated) cinematic adaptation of the trilogy’s first volume, The Golden Compass, due out this Christmas season. If I were you, I’d make a point of reading the original first.