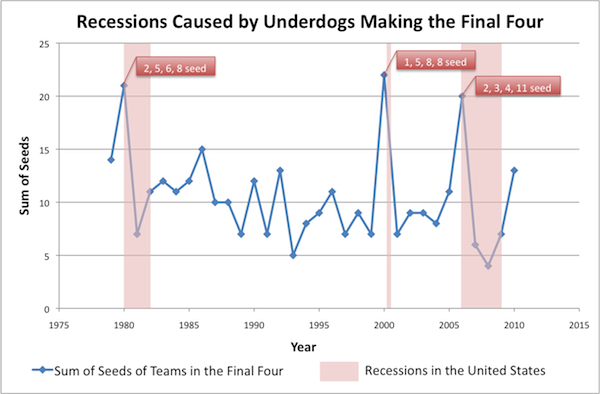 The economy has added over 200,000 jobs in each of the past three months. The S&P 500 is up nearly 25% since last August. Jerry Angelo is no longer the general manager of the Chicago Bears. With all these promising economic developments, Americans are clearly feeling more secure about their future. After a year and a half of recession and another year and a half of tepid growth, it’s hard to blame them for getting excited over positive news. And while millions of relieved Americans kick back to watch the post-season college basketball games known as “March Madness,” it’s even understandable that these same citizens hope to witness a wild upset or two.

These desires are misguided.

Americans must instead resolve themselves to root for the favorites. While the unlikely victories of charmed underdogs are undeniably fun to watch, the enjoyment extracted from them is not without cost. Indeed, three of the past four recessions are directly tied to the previous year’s Final Four featuring an excessive number of underdogs.

What is an excessive number of underdogs? To know that, we must first determine a metric with which to identify NCAA tournaments containing a disproportionate number of lower-seeded teams (“underdogs”) making the Final Four. One such statistic is the Final Four Seed Sum (F.F.S.S.), which is the sum of the seeds of all teams playing in the Final Four. For example, in 2010, Duke (1), Butler (5), West Virginia (2), and Michigan State (5) competed in the Final Four. The sum of their seeds was 13. For reference, the average F.F.S.S. since 1979 is 10.44. Thus, last year’s F.F.S.S. was 24.5% above the average, which is high, but not yet dangerously high.

So what does the F.F.S.S. have to do with the U.S. economy? Well, as the chart above clearly indicates, recessions occur shortly after the NCAA tournament experiences a F.F.S.S. significantly above its average. In fact, since 1979, in each instance that the Final Four Seed Sum was 90% above its mean, the U.S. economy suffered a recession the following year.

Some history: the 1980 NCAA tournament produced one of the highest F.F.S.S. values on record due to the presence of three low seeds: UCLA (8), Purdue (6), and Iowa (5). The F.F.S.S. for that year was an astonishingly high 21. Not surprisingly, the economy was overwhelmed and fell into recession for much of 1981 and almost all of 1982.

The highest F.F.S.S. ever is 22, and it occurred in 2000 when Michigan State (1), Florida (5), Wisconsin (8), and North Carolina (8) made the Final Four. Some economists blame the dotcom bubble and the September 11th terrorist attacks for 2001’s recession, but the economic impact of both events is negligible compared to the damage wreaked by two eight seeds stumbling their way into the final four (where they were both summarily trounced).

Most recently, our economy nearly collapsed entirely because George Mason University—an eleven seed—somehow found itself playing in the 2006 Final Four. With such an incredibly low seed, George Mason consisted of over half of that year’s F.F.S.S. It is therefore reasonable to say that George Mason University is half-responsible for the Great Recession. It thus follows that the school is liable for half of America’s lost GDP caused by the recession.

Economist Gavyn Davies estimates that the cost of the 2007-2009 recession will eventually reach $5,900 billion. That leaves George Mason University on the hook for $2,950 billion. If they can’t afford it by themselves, perhaps GMU can convince Connecticut to split the bill since they were the one seed that managed to lose to George Mason by two points in the previous round.

Nate Silver of the New York Times’ blog FiveThirtyEight calculated that there was a 15% chance a one seed would lose to a sixteen seed this year, an eventuality nearly borne out by the Syracuse/NC Asheville game. If you aren’t extremely relieved Syracuse pulled that one out, you should be: a one seed exiting the tournament in the first round obviously can’t play in the Final Four, and therefore the probability of a high F.F.S.S. and yet another recession goes up. So as the NCAA field narrows, please consider giving an extra cheer for the favorite. While your heart may hope that gritty twelve seed pulls off a remarkable upset en route to Final Four glory, remind yourself what’s at stake: our future economic stability.