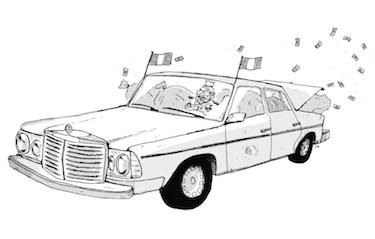 I know a lot of princes around the Internet have given my kind a bad name. So you’re right to be suspicious about this email, despite how well it’s written and the fact that the text is all one size and color. Just keep reading, and I’m sure you’ll be convinced that I’m a reasonable, royal person and that you should definitely agree to hold on to my money right away.

Your first question is probably: Why doesn’t this guy just use a bank to transfer his $5,729,003 in personal wealth? Good on you for knowing how much money I have! Ha, ha. But okay, sure. I wish I could. But I’m an important person in my country, and to get here I had to put a few of my more corrupt associates in power. Including in the state police. And now the government is sort of teetering on the brink of collapse and so they’re always watching me.

Let’s say I could go to the bank, even, in a regular-person costume or something. But now there are a bunch of international laws about banks in other countries not accepting our transfers. I’d have to withdraw my money and transport it somewhere physically. And that’s another problem right there: our currency is so wildly inflated that the equivalent of $5,729,003 American is like 50 grain silos of my nation’s trillion dollar bills, plus you pretty much can’t move anything here unless it fits in the trunk of a pre-1980 diesel Mercedes sedan. So that’s out.

Now you’re probably asking: But why is a prince emailing me? I’m just a regular American person, an average Joe or Larry. I can only say that you’re a Larry of excellent reputation, one whose email address I received from a mutual friend of ours whom I took to wife when she visited my country on safari tour in 2003. Her name is Emily, though you may have known her as Anna, or Jennifer, or Elizabeth, or Mary, and she remembers you very fondly from her school days. She has promised to email you under separate cover, though she may not yet have done so. Right now she’s off on a tense armored car parade through the capitol.

Last but not least, I suppose I haven’t mentioned yet why I’m in such a hurry to get this done. Well, it’s maybe your country’s fault that my country has been eviscerated by war and rebellion, and that the insurgents here have assault rifles, and that small children are being conscripted into the rebel army—that every day we come a little closer not just to political collapse but to bloodshed in the streets. You maybe shouldn’t have given anybody here all those guns, or put all those puppet regimes in power in all of our neighboring countries. No hard feelings, though, really, especially not in your case, Larry. I know your democracy prevents any one person from being responsible for anything.

So if you could send me the password to your PayPal account I’ll just deposit all my money in there from my computer. And when I take it out again I will leave you one million dollars, or whatever the equivalent is in our worthless child’s birthday confetti of a national currency.

With sincerest thanks for everything,

PS: The attachment to this email is a photograph of me in happier days.