Last month, I invited Apple employees to send me funny stories, and they did not disappoint. (The invitation still stands, so please drop me a line!) Here are three of my favorites so far, plus a review.

The Pickup Artist
submitted by 007

I gave a One-to-One lesson to a young man I’ll call Jonah. He dressed like a prep. I don’t think he looked old enough to be in college. So, while his laptop is booting up, he asks me how my love life is. I say none of his business and flash my wedding ring. He tells me he’s a pickup artist. He wants to build a website to advertise his pickup artist lessons. He didn’t have any clients yet.

Jonah looks around at my co-workers. Most are geeks. He tells me he could teach any one of them to pick up any “fox” they wanted. Jonah never calls women anything but “foxes.” I didn’t have the heart to tell him the guy he was pointing to? Gay.

Jonah wants to put a photograph on his website’s front page. I think, good idea. Like one of those testimonials, “This is me. If I can get the foxes, so can you!” Instead, what he’s got is a cheesy screenshot of a woman he tells me is a Playboy Playmate he took out on a date. 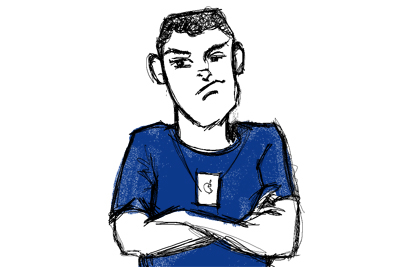 Once Jonah slept with her, which he said he “hoped to accomplish soon,” he would be in a position to advise others how to do the same. I thought, this guy needs more help than I know how to give in a one-to-one.

The next week Jonah got my co-worker, Fred. I made sure to situate my own appointment nearby because I wanted to hear how things went. A minute later, Fred busts out laughing, and we all turn to look. Fred waves that it’s all right and regains his composure.

“Listen, kid.” Fred says. “Thanks, but no thanks. I’ve forgotten more about dating than you will ever know!”

Five minutes before midnight on New Year’s Eve, a few blocks from Times Square, a homeless man with a dazed look in his eyes wandered into our Apple Store. The Geniuses on overnight duty eyed him warily as he zigzagged his way to the person checking-in customers. When a genius called out the next appointment’s name, that man stumbled toward the bar. Waves of odor washed over so hard that neighboring Geniuses had to hold their breath. You could smell a decade of the city on the man. He pulled out a brand new iPod touch and set it on the bar. We relaxed a bit. It all seemed legit. Then, he pulled out a jar of his own urine and set that on the bar beside the iPod.

A customer came up to me and put a MacBook, an iPod, and a USB cable on the table.

“I was copying a song from my computer to my iPod,” he said.

“But it never got there.”

“Do you want to try it again?”

“We can’t, because the song’s not on the computer anymore.”

He hands me the USB cable and says, “It must be stuck in here. Can you get it out for me?’

From time to time, I will critique media coverage of Apple. I take inspiration from Stephen Colbert and the Best American Essays collection of 2003, which includes the harshest book review you will ever read. Bear with me.

Home Alone by Caitlin Flanagan critiques Christopher Byron’s biography of Martha Stewart, and if you enjoy writer-on-writer violence, read it. What begins as a book review blossoms into a deconstruction of Martha-bashing and closes with brutal simplicity how Byron misses the point.

For example, Byron derides Stewart for asking what the thread count was in a line of bed sheets which were to bear her brand name, implying this proved her neurotic need to oversee even unimportant details of production. Flanagan points out that thread count is the only salient metric in bed sheet quality. Byron then triumphantly reports how the bed sheets felt rough and failed to meet sales expectations, to which Flanagan replies, duh, that’s because the thread count wasn’t high enough.

That review comes to mind because last month the New York Times Magazine published an article by economics reporter Catherine Rampell entitled “Cracking the Apple Trap.” Online, the piece was retitled, “Why Apple Wants to Bust Your iPhone,” and I am still dumbfounded that it was considered news fit to print.

The author thought her iPhone showed “sluggish” performance and shortened battery life around the same time the new models were released. Considering the provocative titles, and the opening line, “At first, I thought it was my imagination,” a reader might expect to read what investigation that confirmed such suspicion. What a disappointment, then, to find that the rest of the article is littered with obfuscating maybes, possiblys, likelys, and probablys. The piece meanders through pontifications about business incentives, essentially rests in the author’s aggrieved imagination. Basically, the New York Times has stooped to link-baiting, and I fell for it.

As I’ve mentioned in this column before, naming Apple in your headline guarantees a spike in online traffic, reliably drawing out both fans and haters. For an author like Rampell, however, who touts an award for evidence-based reporting, such tactics should be more embarrassing. For example, rather than state the well-known fact that all batteries have a finite number of charges and degrade over time, Rampell deliberately writes that “Apple phone batteries” do so, implying peculiarity and intention.

One expects Fox News to lead off thinly veiled editorials posing as economics coverage with phrasing like, “Some say,” or “Many may believe,” but the Gray Lady? Say it ain’t so! I pray we won’t be subjected to a New York Times that goes all Buzzfeed with its headlines. “25 Things You Won’t Believe About Obama!” “Sh*t All Congressmen Say!” “Why the Middle East is like Game of Thrones!” “Please, God, Retweet This!”

There were so many lapses in logic in Rampell’s article that Gizmodo tech writer Brian Battell felt compelled to demolish them point-by-point in his response “There’s No Such Thing As an ‘Apple Trap,’” skewering the piece as “misinformed, and worse, misleading.”

Which is why, apparently, Rampell wrote a follow-up article two days later entitled “Planned Obsolescence, as Myth or Reality.” Referencing no less than three economists by name and “a lot of technology experts” not by name, she successfully recycled half of her first piece, which inferred Apple’s evil motives, to arrive at a new conclusion, “It’s actually very hard to infer a company’s motives.” What a wonderful non-apology. Ironically, it rendered the older article obsolete. Was that planned? That’s pretty fucking meta.

Rampell makes sure to note that Apple didn’t respond to her calls regarding accusations of planned obsolescence. I’m sure the company could dedicate huge teams responding daily to such calls, but wouldn’t that incentivize idiocy? Perhaps not feeding trolls the responses they crave is better for business. Also, if I worked for Casio, and a journalist called me to complain his calculator watch wouldn’t run Photoshop, I might not have any comments I’d want to see printed, either.

“The answer is not particularly obvious.” The follow-up states. “The best one can do is look at whether Apple would even have the incentive to cause its products to deteriorate more quickly over time.”

Really? Is that the best that that economics reporting can do? Why only Apple? To paraphrase Battell, couldn’t it be that your device and its battery have aged, as all things (annoyingly) do? Or is Apple behind a worldwide conspiracy, pre-programming and remote-controlling millions and millions of units to sort of self-destruct, barely perceptibly, because some people you read about in a class say there might be a buck to make? Do you have any idea what kind of customer behavior your article brings down upon our employees? How many people will now and forever trot out your wobbly, opportunistic guesswork as proof that Apple is against them?

This reminds me of a Howard Stern radio broadcast in which he spoke to a caller who stated that Korean deli owners only thrived in New York because they were exempt from taxes. Stern, to his credit, scoffed.

He asked, “Do you actually believe that? That out of all the hundreds of nationalities in this great city, that this one random one is somehow, secretly exempt from paying taxes?”

“That’s what I heard,” she replied again.

Look, Rampell, you already won. You got paid twice. Once to promote an idea, and then again to retract it. That’s good economics we can learn from.