Q: What is your job?
A: I work for a manufacturer who makes custom-made airbags and inflatables.

Q: Is there a lot of demand for custom airbags?
A: More than I’d originally thought there’d be!

All around the country, people set up fairs for schools, churches, counties, and they all want inflatable things that you can jump into.

Q: Do you remember when you first started?
A: Yes. They asked me to head up the custom department. We make replicas of almost anything. Like for concerts, we’ll make a giant whiskey or beer bottle. We also make giant things for Comic Cons, we make obstacles for Ninja warriors courses and that kind of thing…

At one point we met the owner of the airbag patent — the guy who invented the type of airbags we use. He used to be a trapeze artist and after getting hurt, he set his mind to coming up with a better way to fall.

People picture just a giant bag of air, but the inventor of our airbag came up with this design that’s like a bunch of inflatable pillars, and when you land on it, it’s like a bunch of shock absorbers. There’s an aperture at the bottom and with the right amount of air coming in and going out, it’s a really comfortable landing.

Q: How do people find your company?
A: That’s a good question. We have daily marketing meetings to try to figure that out.

We do go to these tradeshows — one coming up is called Gibtown. It’s in something like Gibsonton, Florida. Once a year all the carnies from across the country come together there to buy their equipment.

There’s another tradeshow in November in Orlando called IAAPA — like International Association of Amusement Park something or other… It’s full of people who sell things that can go in an amusement park. Like cotton candy sales, Coke sales, people who will set up a full petting zoo at your location…

If you had a shopping list of everything you needed to build Disney World, you could get it there. And we’re there too.

Q: How long of you been doing this job?
A: Five years, almost 6 years.

Q: What’s the day-to-day like?
A: People call in, and they have these ideas, and when I first started we did a lot of mud runs, like a pool, ramp, a slide, things to crawl up and under.

I knew how to draw — I took basic architectural drawing in high school. And my family have always been makers; my mom is a costume designer, my dad a woodworker. So I am good at helping figure out how to make what people want.

I always try to get a rudimentary drawing from the client though, even if it’s just a really rough sketch.

Q: I didn’t realize there was such a market for inflatable stuff.
A: Well, for example, if you make something that uses trusses and scaffolding, you have to load it up and take with you, and it can take, say, four containers. If you can come up with a concept that’s inflatable, four containers is now one container.

Q: What are some of the projects you’ve worked on?
A: One of the first things I did was really just plain-Jane. I got a call from a guy who had pitched a show to the History Channel or something. He had this idea of doing three full-scale replicas of the Hindenburg.

He hired us to make bags full of whatever material it is that they used to inflate the blimp, whatever it is that makes it float, I can’t think of it right now. Anyway, they look just like really big grocery bags and they are custom-fit into sections of the blimp. Then they lit them on fire or whatever to re-create what happened.

Q: I feel like I saw that show!
A: Yeah, there was part of the show where if you paused it and squinted, you could see our work.

Q: Tell me about some of the other memorable things you’ve done.
A: We built an inflatable bounce house for the Museum of Sex in New York. It’s a room of inflatable boobs.

Q: How big is it?
A: It’s maybe 15 by 15 inside. It’s like a kids’ bounce house, but inside it has breasts of different shapes and sizes. 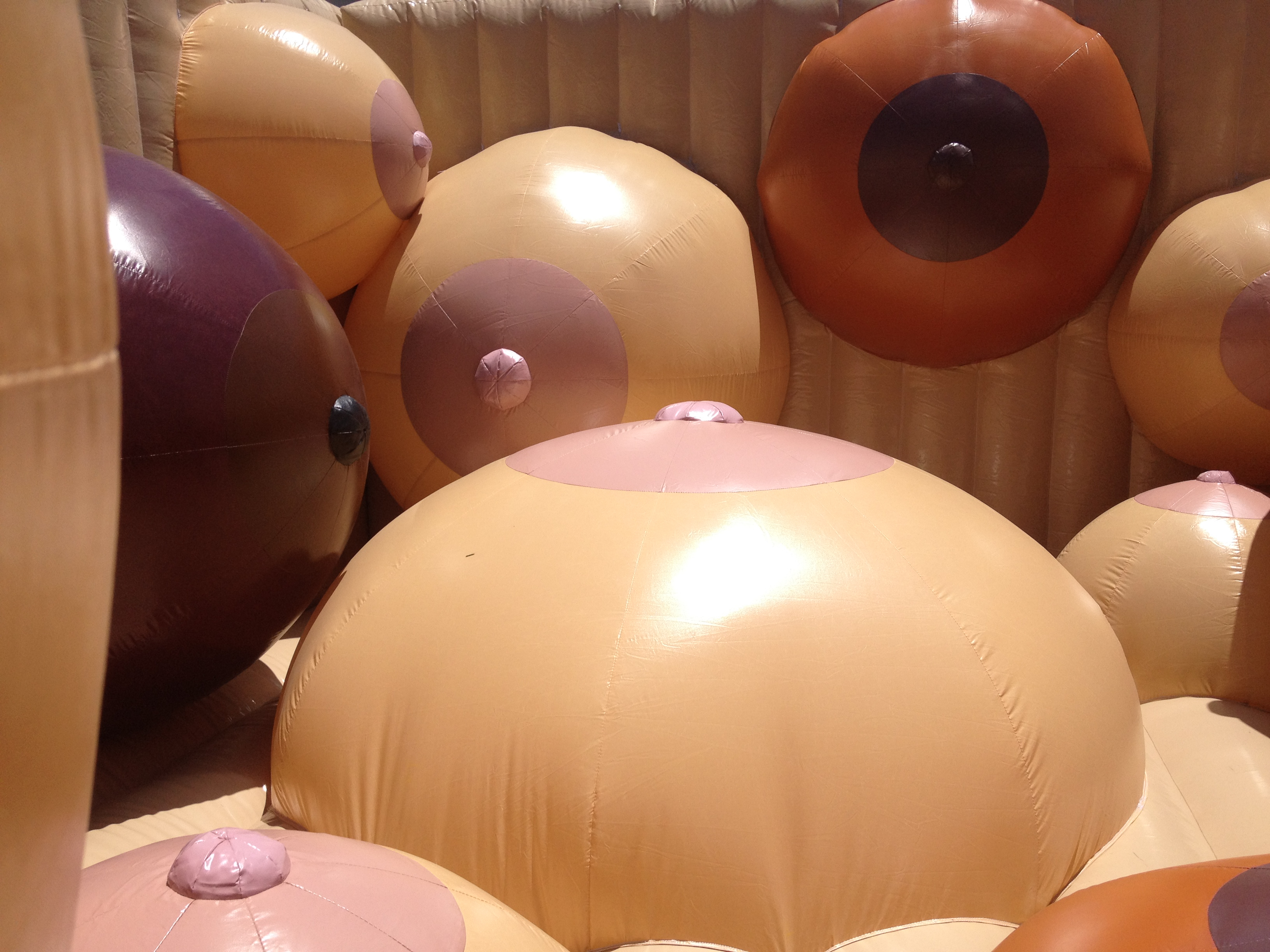 Q: Is it still there?
A: I think so. In fact, I have a friend who was in New York riding a train and there was an ad on the train that showed a picture of the bounce house. There were a bunch of kids on the train, and they started chanting something about it—like “the booby bouncer, the booby bouncer!” or something.

Q: Have you ever done something you weren’t proud of?
A: No. But I can think of something we didn’t end up doing.

Q: Why didn’t you end up doing it?
A: We gave him the price tag and he couldn’t make it work.

Q: Do you do airbags for stunts, that kind of thing?
A: There really aren’t that many stuntmen to sell to. The pool is pretty small.

The coolest one is Disney, though. In Shanghai, at the Disney park there, they do a live “Pirates of the Caribbean” stunt show. At one point, there are two people fighting on a ship’s mast, and one guy falls through the deck of the ship and onto an airbag that we made for them.

Q: Cool. Anything else?
A: Have you heard of this place called Stone Mountain, Georgia?

Q: No, I haven’t.
A: I hadn’t either. They have a park there that’s built around a huge rock in the middle of a forest. Into the rocks they’ve carved all these Confederate generals and at night they light it with lasers and play “The South Will Rise Again.”

Q: Excuse me?
A: Yes. And they have a ropes course there—a three-story system of ropes that people traverse while they are harnessed in. At one point they can jump into one of our airbags.

That place is just something I would not have otherwise experienced. At one point I was staying in a hotel in the park and they were doing the lasers and I was thinking about all of the stuff I would’ve never known about.

Q: I had definitely never heard of that place. I’m intrigued by this whole idea of a Confederate laser show.
A: Yeah, this job is opening the world to me.

In general, in this job, all of these people have these crazy ideas and we help them bring it to life.

Another thing we did is an escape room… We did one where you have to jump out the window and then you land in an airbag.

Q: I did an escape room once but I can’t imagine jumping out a window at the end! Anyway. You stay busy year-round?
A: Yep, the company, i2k Inflatables, has been busy for 25 years.

I love it. It’s a lot of fun for me. It’s always something new.

We sell things that people are using to make money, so the longer it takes, the longer they’re not making money. That part is a little bit stressful.

But we get to do cool things. Like we just made 100-foot long Ninja Warriors course that’s all inflatable. We do a lot of Ninja warrior courses
— where instead of falling into water they use our airbags, that kind of thing.

We’ve made a 65-foot-tall slide and when you get down to the bottom you launch into the air and land on an airbag.

Q: This sounds amazing and fun.
A: Yeah.