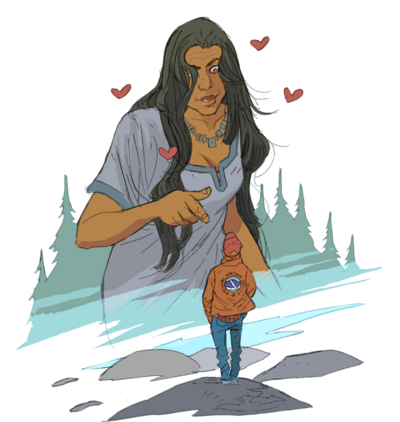 In 2019, an abandoned smartphone was found partially buried beneath layers of sediment and urine in a South Boston alleyway. This forgotten relic was soon revealed to contain a remarkable audio-text describing in great detail the religious beliefs of ancient Scandinavia. Dubbed The Impudent Edda, this oral manuscript was transcribed and released to the general public as Norse Mythology for Bostonians in early 2020.

During the global lockdown that followed the transcription’s release, archaeologists, historians, and philologists continued to study the audio text as well as the device itself, now known simply as the Codex Bostonia. These researchers eventually uncovered an additional stash of hidden audio files stored in a previously secret location on the phone’s memory card. Three of these recently recovered myths have thus far been fully documented and are now being made available to the public here for the first time ever. The breadth of their arcane lore, the depth of their spiritual insights, and the poignancy of their poetic revelations confirm that the collective audio texts of the Codex Bostonia remain the single most important contribution to our knowledge of pre-Christian Scandinavian religious beliefs to have emerged in a millennium.

Lyfjaberg Gets Taken
by Eminent Domain

So now this all began a wicked long time ago ’round the time when evuhryone was fleein’ the fuckin’ famine in the old country. The city was just gettin’ too fuckin’ crowded n’ the Brahmins had the money tah take the train up tah New Hamphah n’ Maine tah explo’ah the mountains fahr picnics n’ skiin’ n’ shit n’ so that’s what they all did n’ this was like a real populah thing tah do that nevah died off ’cept fahr the railroad paht as evuhryone just drives now instead n’ clogs up 93 like a fuckin’ 100 yee’ah r’old toilet.

But anyway, yah know, it’s like Industrial fuckin’ Revolution days n’ so the Brahmins ahr buyin’ up land n’ watah rights all ovah the fuckin’ place n’ they’re buildin’ railroads n’ textile mills like there’s no fuckin’ tahmahhrow. N’ one’ah the side effects’ah all this is that there was alsah lots’ah explahration bein’ done too by some old time scientist type guys since the mountains still weren’t supah well chahted back in those days. N’ some’ah these guys stahted climbin’ up fuckin’ Lyfjaberg itself n’ making some sehrious fuckin’ weathah r’obsuhvations. ’Cause I mean, the weathah r’up there really fuckin’ sucked on accoun’ah there bein’ a frosty old giantess who lived up there with her nine nuhrse goddesses.1

So her name’s Menglad which must’ah really fuckin’ sucked fahr her in high school n’ I don’t know how she got outtah Jotunheim ah convinced some goddesses tah be her nuhrses. Maybe these were the fihrst nine goddesses tah finally get ti’ahd’ah waitin’ outside’ah Mimir’s crappy cave tah assault Odin whenevah he tried to show his fuckin’ face as punishment fahr his sendin’ Freyja a fuckin’ dick pic, n’ they just figyah’d, “Hey, the White Mountains sound a hell of a lot bettah r‘en waitin’ ’round hee’ah fah r’Odin tah sneak outtah this fuckin’ shit hole.” I don’t know but anyway, Menglad’s been sittin’ up there waitin’ fahr her fut’ah husband tah show up one day n’ woo her off her fuckin’ feet ’cause that’s what’s been pre-ahrdained. N’ in the meanwhile she’s just havin’ her nuhrses heal evuhryone who’s dumb ‘nough tah hike up tah the fuckin’ summit n’ not prahpose tah her. So even though all these scientists just keep showin’ up with broken bones n’ frostbite n’ shit, Menglad n’ her special nuhrse goddesses just keep on healin’ ’em n’ evuhrything’s kindah wohrkin’ out in some sohrt’ah whacked out symbiotic type’ah way.

So Svipdag hops on bo’ahd the train n’ he rides it up tah Lyfjaberg n’ then when he gets there he gets off at the platfohm n’ there’s this cranky old hobo blockin’ the trail up the side’ah the mountain. N’ so, natuhr’ly the two’em get intah one’ah those annoyin’ question-n’-answah sessions that all those fuckin’ ancient Icelandahs loved so much n’ then eventually the old hobo figyahs he’s heahrd ’nough bullshit ’bout legal statutes n’ juhrisdictional prudences n’ whatevah the fuck else n’ so he just hobbles off tah wherevah the hell it was he came from.3

So Svipdag hikes up the mountain n’ eventually he gets tah the top n’ he sees this cozy little summit house where Menglad, her nuhrses, n’ some scientists ahr all hangin’ out. So he goes in n’ evuhryone looks up at him n’ Menglad sits up real straight ’cause she notices that this guy doesn’t look like just anothah fuckin’ scientist n’ that, yah know, maybe her fut’ah husband has finally fuckin’ ahrrived.

N’ then Svipdag prahceeds tah give her notice that her land is bein’ taken away by eminent domain n’ that she’ll be compensated fah r’it n’ she’s just like, “You gottah be fuckin’ shittin’ me!” N’ so she fuckin’ refuses tah acknowledge the guy n’ now it’s gettin’ real awkwahd at the top’ah Lyfjaberg n’ so all the scientists staht tah sneak out the doohr n’ back down the mountain.

So now Svipdag’s all alone in there with a frost giantess n’ nine goddesses who do her biddin’ n’ let’s not fahget that even though Menglad’s been happy ’nough to help heal people, she can alsah be fuckin’ cruel as ice since it’s in her own fuckin’ evil giant DNA. So she tells the goddesses tah lock the doohrs n’ now Svipdag’s trapped in there with ten divine hostile women n’ Menglad tells him that his choices ahr eithah tah mahrry her, in which case she’ll give up Lyfjaberg tah the fuckin’ weathah sehrvice without a fight, or she n’ her nuhrses will kill him right there on the fuckin’ spot. N’ naturally he’s thinkin’ he doesn’t get paid ’nough fahr this shit but in the end it was a pretty easy decision n’ so he agreed tah mahrry Menglad n’ they had a supah nice fuckin’ weddin’ ovah r’at Bretton Woods n’ eventually they moved out tah Colorado n’ Menglad set up a new Lyfjaberg out there n’ Svipdag got a job at the Pikes Peak Observatahry4 n’ eventually the nuhrses all joined ’em aftah wohrkin’ at MGH fah r’awhile just tah make ends meet. But since they all depahted the poohr Old Man’ah the Mountain ended up crumblin’ down tah fuckin’ bits since there were no mohr divine entities tah heal his wounds n’ keep his heahrt goin’ n’ so now New Hampshah’s fuckin’ quahrtah don’t make no fuckin’ sense.5

Honestly, I don’t even know what the point’ah this fuckin’ myth is. I kindah think someone just made it up.

1 While the anonymous poet of the Codex Bostonia’s audio-text neglected to name the nine goddesses who attend Menglad, they are revealed in Fjölsvinnsmál, which comprises the second half of a much older source now known as Svipdagsmál. The first half, Grógaldr, tells the story of how Svipdag performed a necromantic rite to raise the spirit of his dead mother for magical assistance on his deadly quest to visit Menglad, which had been thrust upon him by his ill-intentioned stepmother. The audio-text of the Codex Bostonia clearly deviates from the early sources regarding the rationale for Svigdag’s visit to Lyfjaberg.

2 This is an important new detail for Eddic scholarship because it allows us to deduce the actual location of Lyfjaberg, which has remained elusive for centuries. While uncorroborated elsewhere, the details provided here clearly imply that Lyfjaberg is none other than Mount Washington in the state of New Hampshire.

3 Fjölsvinnsmál reveals that this hobo is Fjolsvid (hence the ancient poem’s title). He confronts Svipdag and the two engage in a prolonged series of questions and answers. It is often presumed that Fjolsvid may be none other than Odin himself, which implies that he must have finally escaped from Mimir’s cave and the angry goddesses who had trapped him there after he had unwisely sent Freyja a dick pic.

4 This is another important, new detail that augments our traditional knowledge of Eddic lore. Here, we learn that Lyfjaberg is perhaps not a permanent, geophysical location but, rather, a sort of institute capable of relocation. Apparently located in New Hampshire from ancient times until the early twentieth century, Lyfjaberg appears to have been relocated to Colorado at least by the time of the recording of the audio-text found on the Codex Bostonia.

5 One of the few similarities that this audio-text from the Codex Bostonia shares with that of Svipdagsmál is how Menglad waits for her future husband to appear in the form of Svipdag. However, in Svipdagsmál, Svipdag is not coerced into the marriage by threat of death.