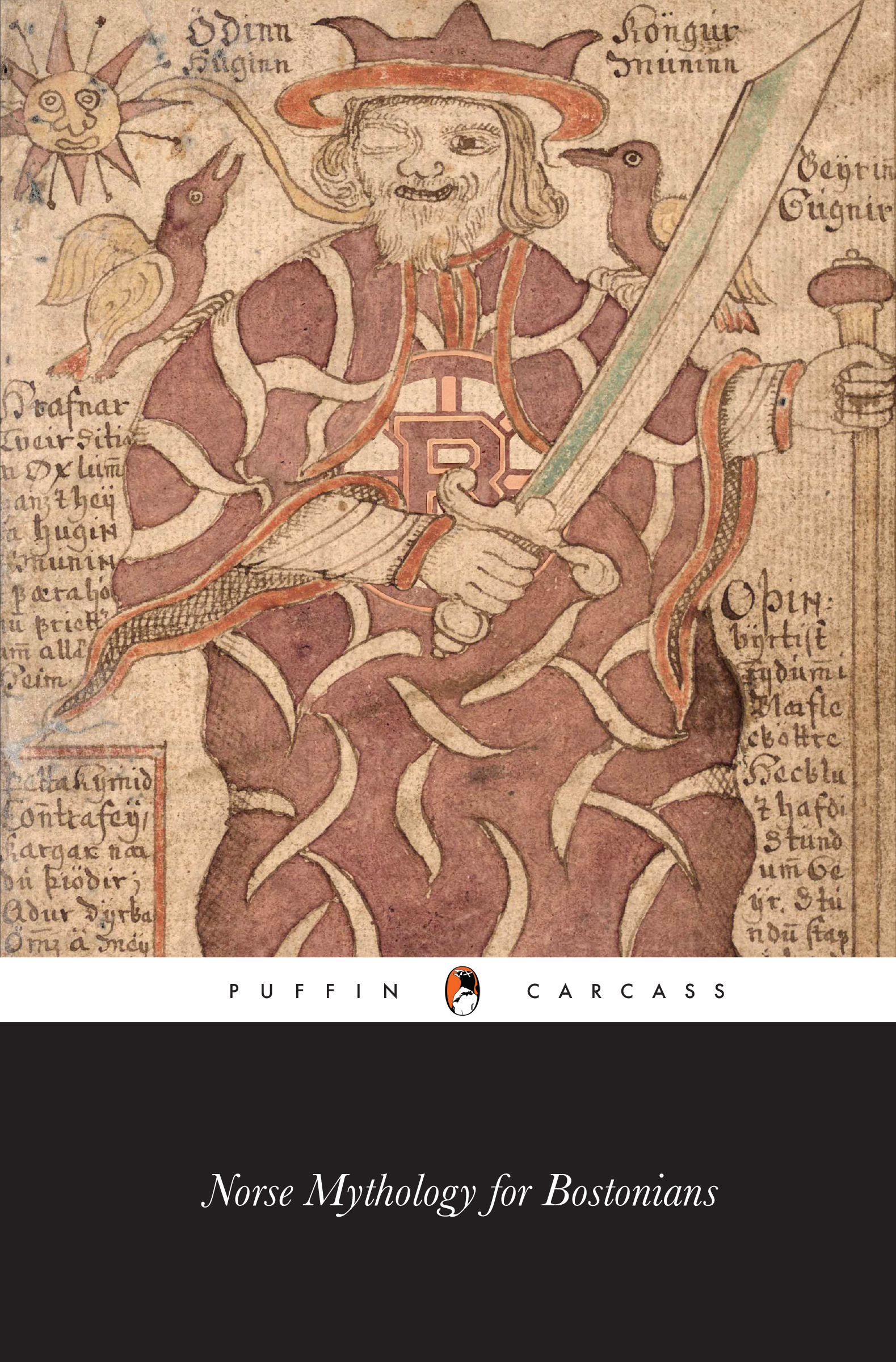 Norse Mythology for Bostonians: A Transcription of the Impudent Edda is a new book based upon McSweeney’s’ long-running Norse History for Bostonians column. Expanding extensively upon the isolated scholarly selections previously published online, the book features all-new episodes and unique retellings of the exploits of the Norse gods, as well as substantial introductory material and explanatory footnotes. Readers will encounter fresh perspectives on mythological narratives ranging from Odin’s unprovoked murder of a friendly witch to Thor’s epic temper-tantrum on the Green Line to Brady’s ultimate victory over Goodell at Ragnarök, the final world-shattering battle of the gods. Chapter highlights include:

More information about the book, including a listing of the independent shops that are carrying it, may be found here, and an exclusive excerpt about the time Thor had to renew his driver’s license follows below.

Oh god, so poohr fuckin’ Thor man! He has tah go get his drivah’s license renewed since it’s ’bout tah expiyah r’n he has tah get his photo taken too since the last time he did that was mohr ‘en nine yee’ahs1 ago n’ they don’t let yah do it online when it’s been that long. Which would suck fah r’anyone but I really don’t get it in Thor’s case. I mean the guy doesn’t even age; he fuckin’ popped outtah his mothah’s womb2 lookin’ like a full-grown body buildah with a prickly red bee’ahd n’ he’s gonnah stay lookin’ like that till the end’ah time when the fuckin’ sehrpent poisons him tah death. But I guess not even a divine entity like Thor can escape the long ahm’ah the RMV.

N’ as yah’d fuckin’ know it, Thor’s been out all night drinkin’ the night befohr n’ so he sleeps through his fuckin’ alahm clock n’ doesn’t get his ass down tah Haymahket till fuckin’ like half past nine. Now there’s these couple’ah bihrds sittin’ on a telephone wi’ah shit-talkin’ each othah r’n when they see Thor comin’ they’re fuckin’ like, “Look at that dipshit drivin’ a couple’ah goats! What a fuckin’ idiot! He’s nevah gonnah find a place tah pahk at this time, what the fuck’s he thinkin?” But Thor’s got no idea what they’re sayin’ since he’s nevah r’eaten a dragon’s heahrt3 befohr n’ so he’s figyah’in’ he’s gonnah be able tah find a place tah pahk but natuhrally the bihrds ahr right n’ all the on-street pahkin’ spots ahr already long gone n’ so now he’s drivin’ his goats ‘round n’ ‘round in fuckin’ cihrcles downtown, flippin’ off evuhry jackass who cuts him off till finally he just gives the fuck up n’ goes n’ pahks in the fuckin’ gahrage. 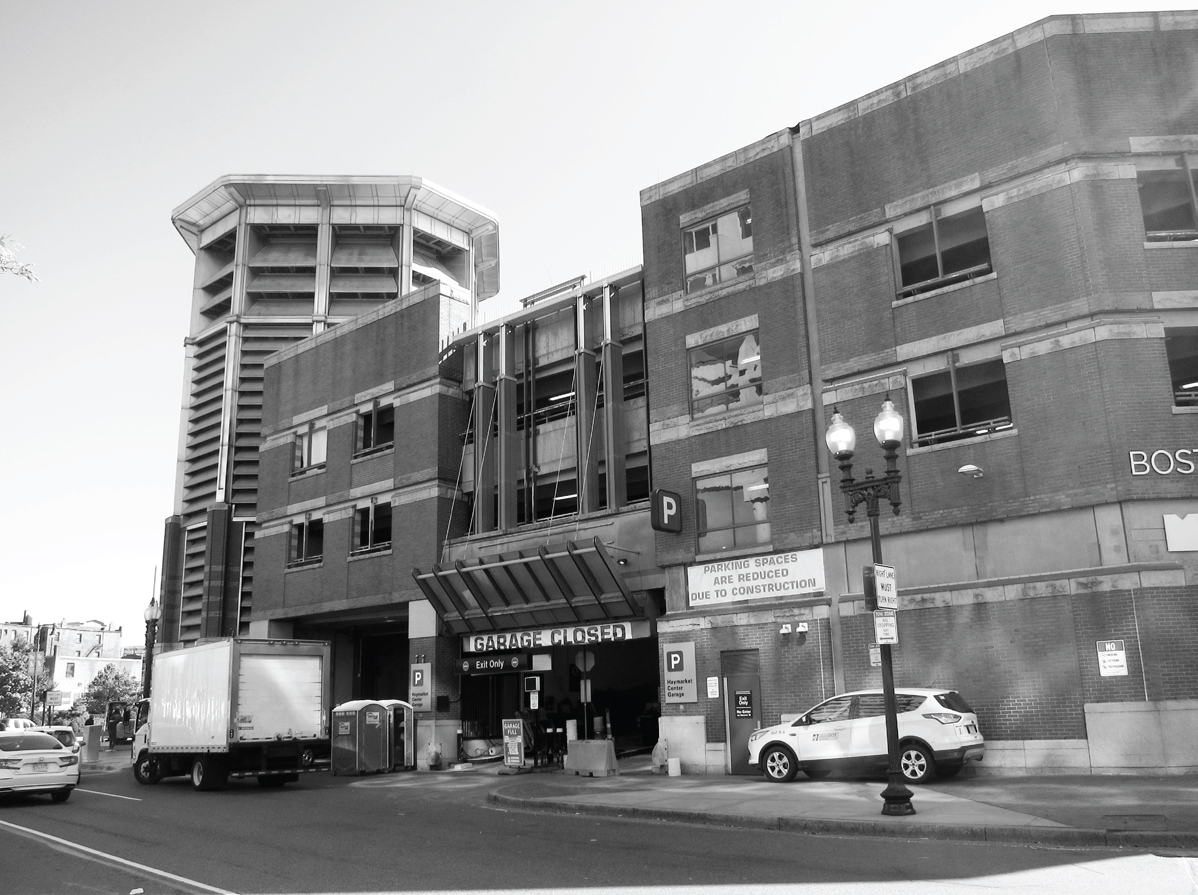 Brick and concrete parking garage in downtown Boston where it is said that Thor once parked his goats for an entire day while he dealt with getting his driver’s license renewed.

So now he locks the goats up n’ he goes intah the RMV n’ takes a numbah r’n he sits down n’ prahceeds tah staht waitin’. So he’s sittin’ there now lookin’ ‘round the room at this god-honest public display’ah human fuckin’ misahry n’ even though no one’s talkin’ tah each othah, yah could just cut the tension in that room with a fuckin’ spoon. But yah know, Thor’s an enahgetic, sociable guy n’ eventually he just can’t help keepin’ quiet anymohr n’ so he stahts tellin’ the little old Cahribbean lady sittin’ beside him ‘bout the time that he decapitated some trolls n’ then went bowlin’ with their heads with Loki aftahwahds but she just gives him a weihrd look n’ gets up n’ goes n’ sits down on the othah side’ah the room since no one wants tah sit next tah a fuckin’ freak at the RMV.

So now it’s like mid-aftahnoon n’ they finally call Thor’s numbah r’n so he gets up n’ he goes ovah tah the countah that’s got his numbah flashin’ ‘bove it n’ he just ‘bout spazzes the fuck out when the lifeless zombie creature4 on the othah side’ah it stahts talkin’ tah him like a genuine troll. I mean, fahr’a guy who makes a livin’ killin’ monstahs, it’s kindah like a fuckin’ mihracle he didn’t just react on reflex n’ muhrdah this cretin right on the fuckin’ spot. They don’t always employ humans in these places, yah know?

But anyway, Thor fills out his papahwohrk n’ he gets his pictchah taken n’ so then he finally leaves that hellhole but by now it’s fuckin’ rush hour n’ so he’s fohrced tah pay an ahm n’ a leg fahr his fuckin’ pahkin’ spot n’ then he stahts up his goats, pulls outtah the gahrage, n’ prahceeds tah spend the rest of the night in stop-n’-go traffic watchin’ each’ah his goats drop a deuce evuhry time he applies some pressuh r’on the fuckin’ brakes.

It was a supah shitty day.

2 Thor’s mother is the Earth, so his birth most likely involved catastraphic geotechtonic plate movement at the Earth’s surface as his mother violently convulsed and pushed him upward from her deep, plasmic core through her cavernous, igneous birth canal and into the bright light of day.

3 This is an indirect reference to one of the most famous sagas of the ancient Norse: that of Sigurd the Dragon-Slayer. The story has been recorded in numerous manuscripts and formats over the years, having been preserved not only as a stand-alone saga of its own in Völsunga Saga but also in the heroic (not mythological) poems of The Poetic Edda and in an abbreviated format in the Skáldskaparmál of The Prose Edda. While Sigurd’s story does not figure directly into The Impudent Edda, the pertinent part that is referenced here about the consumption of a dragon’s heart comprises one of its most famous scenes. In that particular scene, Sigurd has just slain the dragon, Fafnir, and is seated beside a campfire with Regin, Fafnir’s brother (Fafnir had once been human but used an ancient transmogrifier to shape-shift into dragon form earlier in the saga). Fafnir’s heart is presently roasting over the fire, and when Sigurd tastes its juices to determine whether it is fully cooked, he suddenly gains the ability to understand the avian language. Sitting in a tree above him are two birds who at that precise moment just so happen to be discussing with certainty the notion that Regin will soon attempt to slay Sigurd. Having heard this, Sigurd preemptively strikes and kills Regin first, while he sleeps. Thor, on the other hand, has never actually tasted the sweet nectar of roast dragon’s heart and thus cannot comprehend what the birds above him are saying at Haymarket.

4 Such nightmarish zombie creatures are usually referred to as ‘draugr’ in the old Icelandic sources. A particularly famous one is featured in Grettis Saga Ásmundarsonar in which the saga’s namesake protagonist, Grettir, battles and slays the draugr known as Glam, but not before Glam curses him, his undead and gleaming, evil yellow eyes haunting Grettir in the dark to the very end of his days.

For more information about the book go here. To buy the book, go here.