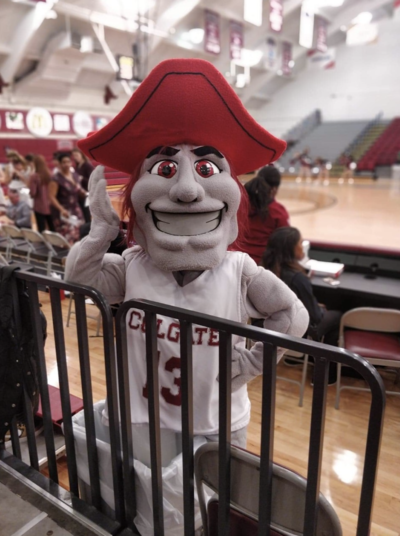 Q: How did you become a mascot at Colgate University?
A: The job was posted in the student job portal. I thought it would be funny and decided, why not?

Q: When was this?
A: In February of 2018. I was a junior. It was funny but stressful and not that much fun.

I was qualified for work-study but having trouble finding a work-study job. I had no money, and I thought it would be funny and knew I’d get paid.

Q: How much did you get paid?
A: My pay stub said $21, so I assume it was $10.50 an hour for two hours. I don’t really know how long basketball games are. It was for the women’s basketball game.

Q: Are you a gymnast by trade?
A: No. It was so far outside my comfort zone. There was a little interview like, “Are you peppy enough to be the mascot?” I’d been a camp counselor, and I knew how to keep kids entertained, but this was absolutely not the same thing.

This was just like, “Put on the suit and be sociable and do a good job.”

Q: Can you tell me more about the mascot?
A: The mascot is called the “Raider.” It has scary gray skin, red eyes, and red hair. Terrifying.

Q: Where did you get dressed in the suit?
A: Somewhere in the back, I think. I remember it was where the washing machines are.

On that note, they do wash the uniform after each time someone wears it. Obviously not the head — I don’t think that’s ever been washed.

Q: Did someone help you put the outfit on?
A: I think I’ve blocked that out. Maybe they helped me put on the head.

Q: When you walked on to the court, did you feel embarrassed?
A: It was deep-rooted discomfort. I knew no one was judging me, but I had no idea what I was doing. They just said, “Walk around and engage with people.”

I had never done this before. I didn’t know what that entailed.

Q: How much do you know about basketball?
A: I know enough of the rules. Although I never sat through a full college game, except for this time when I was the mascot.

Q: How acrobatic did you get? Did you work up a sweat?
A: No, absolutely not.

I was paid for two hours. I walked around and maybe danced.

I was so embarrassed! No one told me I couldn’t speak. That really scarred me.

Q: I didn’t know all mascots were not supposed to talk.
A: I guess people expect the raider to be a man, and then it’s just this quiet girl voice. I guess you don’t want to ruin the illusion.

Q: Were you hot in that outfit?
A: I don’t have a memory of that. It was February in central New York.

What I remember most is that the head was spacious. And other people who signed up to be a mascot were taller. Normally people were 5’8”. I’m 5’5”.

Q: What did your family think?
A: I definitely didn’t tell my family. It wasn’t like, “I did this really exciting thing!” It was more like, “This is the most uncomfortable thing I’ve done in my life; I really don’t want to talk about it.”

I think five or six of my friends came to the game because no one we knew had ever been the mascot.

Q: The video of parts of your performance has gotten more than 700,000 likes on Twitter.
A: I didn’t even know I had video of it until recently. I just saw it in my friend’s DMs on Instagram.

I now have something like ten times the followers I had before the video.

Q: Are there any mascots you look up to?
A: No, not really. Though some minor league baseball team saw the video and replied, “We’re hiring!”

I think all mascots look creepy. Like if you drew this on paper, it wouldn’t be terrifying, but when you make it a giant head and dress it up, it’s freaky.

Q: Did you learn anything from this experience?
A: You have a comfort zone for a reason, and this was not the job for me.

Q: You never did it again after that game?
A: I found an email from the guy who hired me — basically asking how it went and if I wanted to sign up again. I said yes, he sent me the sign-up spreadsheet and said I’d be added to payroll.

I never signed up for another shift because I was so uncomfortable, but also because the times were generally inconvenient.

Q: Anything else you want to say?
A: They won the game.