Q: How did you become a puppeteer?
A: I’m 34 now; puppetry didn’t become a thing for me until my late 20s. I was doing comedy writing, and I realized it would be more fun with puppets. I was also illustrating at the time, creating characters, and I wanted them to come to life. Animation seemed… tedious.

Q: What was the first thing you did with puppets?
A: I made a short film with a puppet in it. It was pretty bad. The puppet was a raptor — his name was Gary. He was dejected because his girlfriend broke up with him, and I played the girlfriend. He realized that his true nature was that of a fierce velociraptor. It had a lot of montages — I’m obsessed with montages.

Q: This sounds pretty good to me.
A: You can find it online. Maybe I’m too hard on myself.

Q: OK so you make the movie. What else?
A: Well, I lived in Boston at the time and I got involved in a puppet theater.

Q: You mean for kids?
A: No, it’s for adults. I mean it’s not “for adults” like something inappropriate. But it’s not for kids. They have this thing called “Puppet Slam.” It’s like going to a comedy show but with puppets.

Q: How did it go?
A: It was well-received. It was kind of sweet.

Q: Then what did you do?
A: I met a comedian and we made some videos with puppets. The Ben and Eric web series. It starred a green blob puppet; it had two arms and a head but no face on it.

Then I moved to LA to see what would happen.

Q: Did you take the bus?
A: No, but that would be a good Muppets story…

Q: So what happened when you moved to LA?
A: I started going to puppetry slams here. I have to say though, even when I got into puppetry here, it was hard for me to admit I was a puppeteer. There was part of me that was like, “I guess I’m one of these now.”

Anyway, a big part of being in LA is networking, and the more people I met, the more doors that would open, and I ended up associate-producing a documentary about Jim Henson.

Q: What? How did that happen?
A: I was working part time at a yoga studio and the owner of the studio’s wife was a producer on the documentary. She had said, “Maybe you can work on it!” And we would joke about it — like I’m sure I will get that job.

But I gave them my resume and two days later I was hired as an associate producer! It was like a scene from a movie where the main character’s dreams come true.

Q: Amazing. What does an associate producer do?
A: I was working under the producers on the show. It was like logging stuff, keeping track of contacts — it was a lot of busy work. But I’d read Jim Henson’s biography and I got to meet and work with a bunch of different people who had known Jim Henson.

Q: Cool! So now you’re a famous puppeteer?
A: I’ve worked with famous puppeteers but I, myself am not particularly “puppet famous” as far as I know. I go to the National Puppetry Conference, I’ve been on TV as a puppeteer… I’m on the board of the LA Guild of Puppetry. There is no PuppetCon, but maybe I should start one.

Q: What does the LA Guild of Puppetry do?
A: They host the LA-area puppetry slams. They also produce a publication called Puppet Life that comes out three times a year. I write for it sometimes.

Q: Is it possible to make full-time living as a puppeteer?
A: I’ve managed probably half-time. The people who make a career out of it are builders at places that make puppets or are 20-year veterans.

Q: Well, one day you will be a 20-year veteran.
A: I guess that’s probably true.

Q: What other kinds of gigs have you done?
A: I did a show on the fuse network that has marionettes — that’s coming out later this year.

I did Stan Against Evil on IFC where I puppeteer these evil creatures… two of them were life-size. One was a demon pig that was so stiff it was like puppeteering a piano and took three puppeteers. It had a creepy face that was controlled by cables. 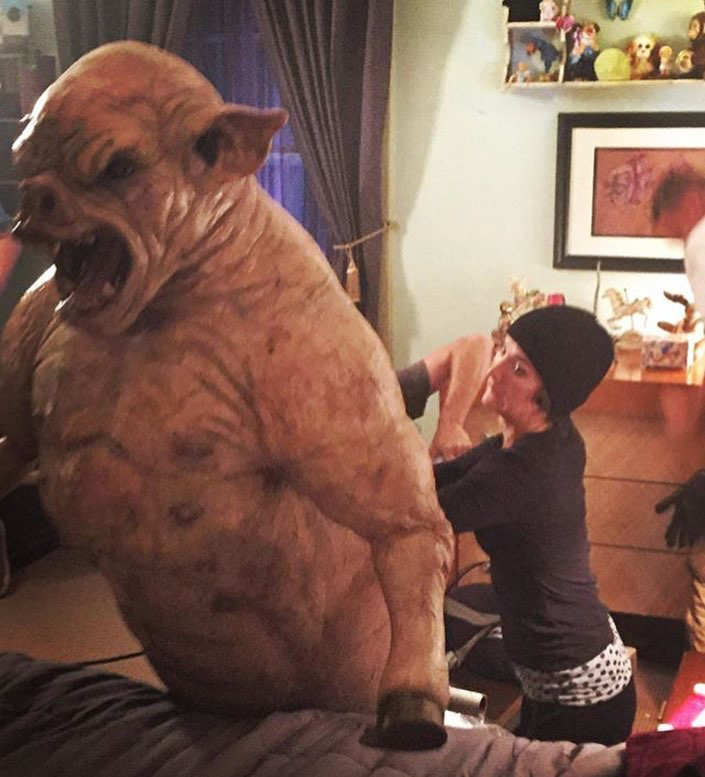 Another time I was in a scene as a shadow puppeteer with Ron Perlman on an Amazon show. I didn’t have lines but I had screen time with him. So that was cool.

I’ve also gotten to do a fair amount of touring and performing as a puppeteer and was recently, reluctantly, on the revival of The Gong Show.

Q: Is there something from your childhood that got you into this?
A: I guess I always really wanted my stuffed animals to come to life, and my Barbies… Did you see that movie called Indian in the Cupboard? It was the story of a boy whose toys come to life. I remember putting my Barbies in an old credenza and trying to get them to come to life (which never happened unfortunately).

Q: Do you have a proudest moment as a puppeteer?
A: Hmmm… well, Paul Reubens recently saw me perform.

Q: Neat!
A: Yeah, I was in a show called, Women in Vaudeville. I do a seven-minute show where I’m on a date with a bunny puppet who’s on his cell phone the whole time. And I do another bit where I have a squirrel who comes out of my coat and tries to get money out of my hands.

Anyway, he complimented my work and it was really cool.

Q: Cool. Any other memorable stories?
A: One time I performed on the Jim Henson Company lot and shared the stage with some of my puppetry heroes.

I was really sick that day, during the rehearsals, and I threw up a lot before the show. They had to lie me down on a couch outside of Brian Henson’s office. His assistant is this lovely women who is always dressed as a fairy and I covered myself up with her petticoats and napped there.

I managed to pull through and was able to do the show that night. We all puppeteered as a group, I think I was on stage puppeteering with Gonzo and Rowlf and Red Fraggle and a bunch of other puppets, and we sang a song from The Muppet Movie in the finale.

My mom was there. She cried. And now everyone in the puppet community now knows me as the puppeteer that was sick at the puppetry benefit. The whole experience makes for a good story so I kind of love it, even the throwing up part.

Q: Amazing! This sounds like a great job.
A: Yes. It’s really fun to breathe life into otherwise inanimate objects. 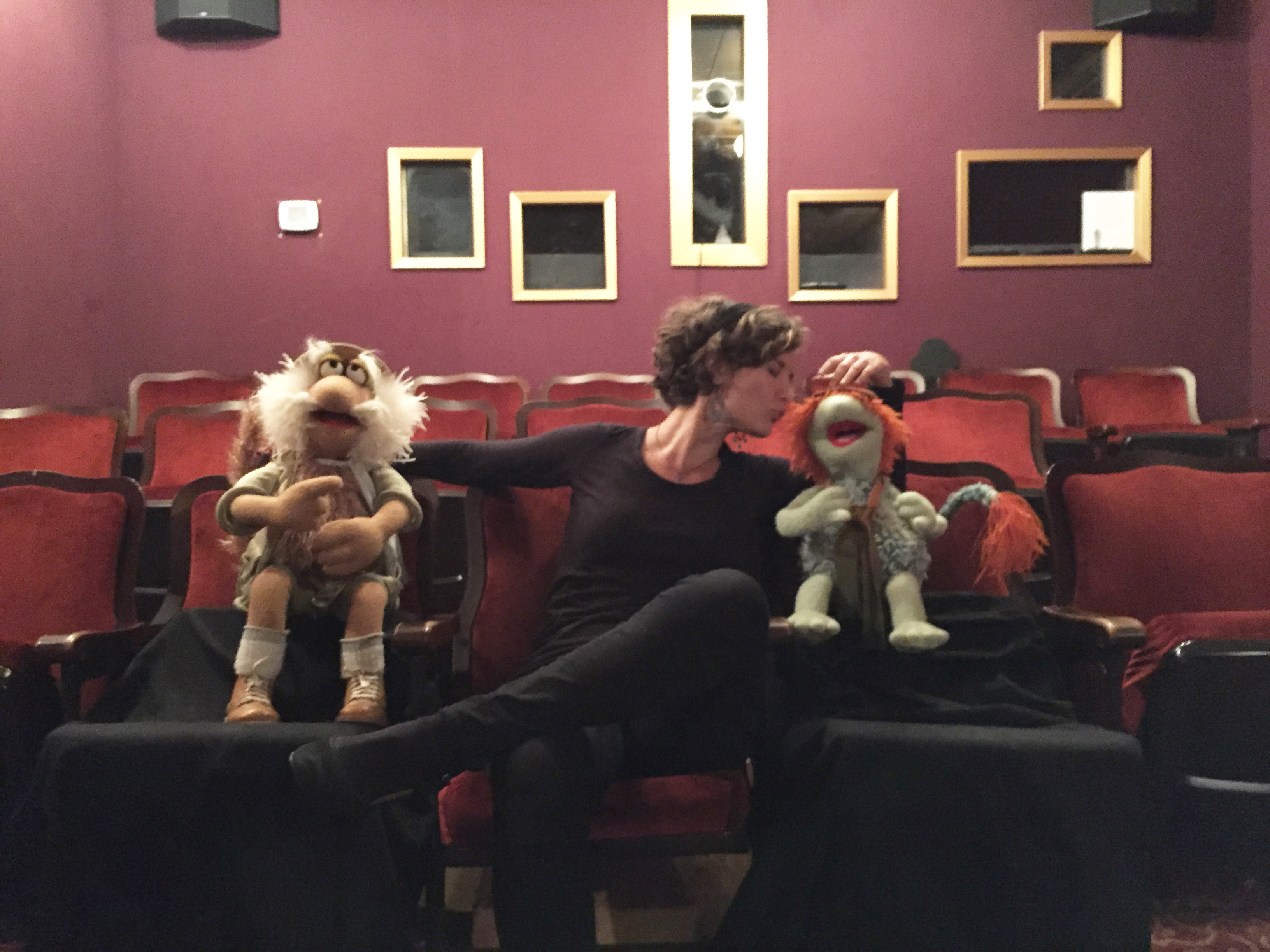