My father’s formal schooling stopped at eighth grade, the year he hopped a Greyhound bus from the Deep South to Chicago. Education for a black kid in 1940s Mississippi was catch as catch can, with Booker T.’s go-slow vision still slow going, and Brown v. Board a full decade off. States like Mississippi denied funds for the construction of black schools, and taxed them just the same when they managed to crop up. Education was a thing the people built themselves, with hard laboring men like my great grandfather—sharecroppers and roustabouts and muleskinners—constructing the schools for the kids on their own time.

This is a photo of the school where my father received his formal education: 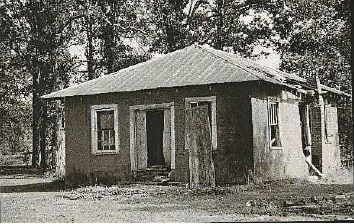 The teachers were usually black women who’d climbed their way to a higher education. My father, at seventy-eight years old, still remembers the name of his fourth grade teacher—Ms. Beatrice Hunter.

My father’s sharpest memories of grade school involve having to go to the front of the classroom to write the alphabet in cursive. He was made to do this with his right hand, rapped on the knuckles if he used his left. I asked him if it was scary, being made to write with his weak hand in front of the other kids, a question he seemed to find odd.

“Not really,” he told me. “It was just how things were done back then. Really didn’t have a choice, and so I just did it.”

There isn’t much that terrifies me more than the idea of being made to write with an alien hand in front of the scrutiny of a crowd. But of course, as with most things with my father, what terrifies me didn’t seem to worry him, at all.

Growing up, even before I got into the wrong crowd and began self-medicating and tuning the world out instead of showing up to class, I always felt that I was a failure in school; a prodigal son of sorts, frittering away the educational opportunity I’d been given, relative to my father’s opportunities.

My early formal education happened at a red-brick school in Small Suburb, Illinois, on some Sunnyside Street, where my delicate young mind was given every opportunity to learn in a nurturing environment. We were post-Cosby Show; multiculturalism and tolerance were hot.

We were the world, we were the children, and all that.

There was one black boy in my entire grade school class, and I was half of him. The other mixed kid was my best friend, Tristan. The minorities at our school were scattered around like tokens, stock characters—there was Black Boy, Jewish Girl, Asian Kid—but if there existed some malicious undercurrent of racial animus at my predominantly white school, it never really touched me. I experienced none of the searing racism explored in the great black literature that I would one day come to love: no Ellisonian moment of a thundering schoolmaster telling me that—couldn’t I see it?—I was invisible; no Pecola-like longing for other kids’ blue eyes. If anything, I felt sort of over-accepted. The teachers and kids’ parents were children of the civil rights movement; they’d grown up listening to the Stones. They thought it was cool, the son of a bluesman right there on-premises.

The alienation that I did feel came from the inside. I believe I can say I’ve lived my life with at least a measure of the blues. Maybe yesterday’s “having the blues” is today’s DSM IV entry. Or maybe DSM IV anxiety entries are anti-blues songs. #firstworldblues, or however you want to tag it.

The most common opening line in the history of the blues is “I woke up this morning,”—sometimes sung, I believe, as a lament in itself—while one of the most common phrases is “I’m worried.” In the blues “I’m worried” signifies more than just a state of unease or concern—it encompasses everything from aggravation to utter despair. Those two recurring lines, taken together, describe my life perfectly.

I wake up each morning, worried.

My memories of grade school consist almost entirely of being terrified each morning at the prospect of having to face the crowd, and, most vividly, the dread of one day having to perform the Pledge. Every morning at our school one of the kids was made—starting in 2nd grade on up to 5th—to recite the Pledge of Allegiance over the school’s P.A. system and deliver any major news to the other students to start the day. We were given one week’s notice of our chosen day to lead the Pledge, in order to prepare. In this way, my memory of the events of the 80s and early 90s are spliced together into a montage of anchorkid reports.

“Yesterday a space shuttle blew up from America and it is sad and we should all have a moment of silence now for them and their families because it is very sad and astronauts are brave.”

“Everyone say a prayer for Baby Jessica tonight because she’s just a baby and so everyone should pray.”

Of the United States of America

“George Bush is going to be our new president he will be 41st because Ronald Regan was number 40 and practice for the Thanksgiving Day play is after lunch. Thank you.”

And to the Republic

“Yesterday a wall in Germany came down and America is the best so we should all be happy.”

(It was here, in third grade—art class, first period—that Jewish Girl, bored, sitting opposite me at the long table, slipped off her shoe and, with all the grace of a little ballerina, raised her leg to a perfect right angle, touching her foot down gently in my lap; I thought it was an accident, until she began massaging me beneath the table, and I remember I was dizzy from the glitter and the glue and the freckles and pigtails, as I got my first taste of a sexual touch.)

For which it stands

“Tomorrow the Hubble Telescope will go into space, which is cool because then we can see very far and maybe see new planets.”

(Long pause after the delivery of the day’s hard news) “…I’m Bart Simpson, who the hell are you?” (Sound of kid being whisked away from the microphone)

With liberty and justice

(Being half the black boy in my school, I often took on the role of ambassador to the world of black people, fielding whispered questions from deskmates):

“Magic Johnson has it. Do you know how you get it?”

“Why’d Mike Tyson do that?”

It was spring of 5th grade that my luck finally ran out: just as I was about to make it home free to middle school, clear of the P.A. system, I was informed one day that I had been scheduled for Pledge duty.

My mother dropped me off at school that day, wished me luck. Groups of kids milling about on the playground. Humdrum rhythm of some school game chant. Brake-slam-shriek of the excitable little girl always present at these scenes. I was tingly with fear; nearly tossed that morning’s Lucky Charms across the hopscotch squares. I hadn’t reached the age where I felt comfortable just all out running from school, yet, and so I waited until our single file line snaked its way into the school before slipping out of it and ducking into the boy’s room.

I locked myself in one of the stalls, pulled my legs up off the floor, hugged them tight, and waited. I could imagine Mr. Dewitt (a friendly principal who in my memory looks like Mr. Belding from Saved by the Bell) sitting in his office and wondering why the day’s anchorkid and Pledge-sayer hadn’t yet arrived.

“The Harrington boy,” he was probably saying, checking the schedule to see who was derelict from duty. “Isn’t that the son of the blues singer? Well now, something must be wrong; he wouldn’t be scared of any microphone.”

I wanted to be that performer, as expected—to have lived up to my father’s reputation on-stage—approached the microphone with all the aplomb of a 60s soul singer:

“I pledge allegiance, well well well, say it one more time… I said I pleh-eh-eh-edgeeee, yes I do, bring it on home, say it again: I said I pledge that old allegiance…”

But there was just me and the crude graffiti on the bathroom stall. Sound of the urinal flushing. Someone pumping the lever of the paper towel dispenser as though it were a broken slot machine.

I wished I had the kind of nerve to go up on a stage as I’d seen my father do a few times at Chicago blues clubs, playing guitar behind-the-back Charley Patton-style, Chuck Berry duck-walking across the stage to the cheers of adoring girls. I wished I could go to the blackboard and confidently write with the wrong hand.

But I wasn’t like that. I would never be like that, I vaguely feared, even at that age. And it would turn out that I was right.

As the opening line of the Pledge of Allegiance rang out—a stand-in performance by one of my classmates—I felt a surge of relief. But as he finished the day’s announcements, the relief gave way to envy—he had done it, and made it seem so easy—which then gave way to a pang of regret, opportunity lost—the medley of feelings that would come to accompany all avoidance behaviors throughout my life, and then it started all over again, the dread, because maybe I would not be left off the hook; maybe I had not really succeeded in avoiding anything. It was something I’d had to do, and hadn’t done. I was in debt, now.

Maybe they would force me to step to that microphone the next day, and then another after that.