Position Papers from the Apple Pie and Machine Guns Institute

When the U.S. Interior Department’s Fish and Wildlife Service announced earlier this year that it would finally end decades of bureaucratic procrastination by deciding once and for all whether to add hundreds of wait-listed species for protection under the Endangered Species Act, environmentalists rejoiced. At long last, they sang into their peace pipes, we will give our animal friends the protection that they so desperately deserve.

While there is some small chance that one nominated animal or another will be left off the list, the most probable outcome is a catastrophic expansion of this already bloated itemization of sacred creatures, for whom the radical environmental left has compelled us to rearrange our entire economic model, designating vast swaths of otherwise economically viable land as subject to onerous protective regulations.

Such limitations are doubly counterproductive, as these no-use designations not only prevent the construction of desperately needed tract housing and strip malls, but also provide a habitat that is less than ideal for animals. Decades of industrial farming have proven that animals are happiest when confined to cages no larger than their bodies. Just compare the two photographs below, one of elephants roaming freely across the African plains, and another of elephants at a secret APMAG ivory farm outside of Santa Fe1 to see which are most satisfied: 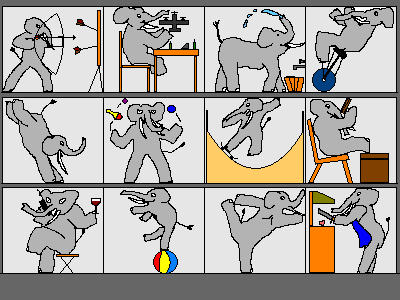 Elephants on an APMAG ivory farm.

While an expansion of the current endangered species list may fulfill Heir Obama’s long-held dream of crushing the American economy once and for all, it will do little good for those of us who have better things to do all day long than crawl around in the swamp looking for rare salamanders. However, just as Obama’s re-election had the inspiring side effect of spurring more Americans to purchase semi-automatic weapons for self-defense, there is at least one positive outcome to the wildlife service’s decision to finally release an updated endangered species list: with these little irritants itemized in one convenient place, we will have an easy-to-access list of animals that should be eliminated first.

Rather than move to protect these creatures, APMAG proposes the Endangered Species Elimination Act of 2013 (ESEA), an important piece of legislation that would reclassify these pest animals as the vermin that they are, targeting them for removal from the ecosystem.

If there is one thing we can all agree upon, it is that there are far too many species of animals in the world to keep track of. Students who should be learning about the supremacy of free-market economics or Noah’s Ark are instead wasting time memorizing lists of stupid animals that have absolutely no commercial value. Enough. The number must come down. By eliminating the animals that are already near extinction, we can build momentum toward the eventual goal of an animal-free planet.2

A mass, intentional, human-driven animal extinction is long overdue. For centuries, animals’ primary collective characteristic has been to make life miserable for humans, from the dinosaurs who tormented the existence of our first ancestors nearly 6,000 years ago to the wolves that have preyed upon livestock since time immemorial. Plus, animals are, as a rule, noisy, disease-riddled, dangerous, and far too numerous. Those unfamiliar with the nefarious nature of wild animals need only study this recent photo of an endangered south china tiger and an endangered Amur leopard throwing a birthday party for North Korean dictator Kim Jong-un: 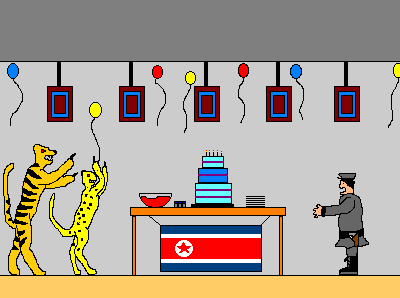 While ESEA would act primarily as a public safety measure, at long last liberating mankind from its visceral terror of the animal kingdom, it would have the added coincidental benefit of freeing enormous chunks of acreage for economy-stimulating development. Once all the spotted amphibians, three-tailed swamp rats, and rare singing bumblebees are permanently eliminated, the developers and industrialists of the world can get back to the difficult work of refashioning enormous chunks of landscape to their liking.

Such an act is of course entirely consistent with conservative thought: just as we should not invite every illegal immigrant with a backache to sign up for disability, we should hardly be upending our entire civilization to build snuggly burrows for the weakest animals. The fact is that when God created the animal kingdom, he purposefully endowed certain creatures with less-than-ideal characteristics for survival in the modern world, so that they could die off for our entertainment.

You can practically hear the owl-lovers crying in their craft beers as they read this. They have convinced themselves and others of the importance of so-called biodiversity, an absurdist far-left fantasy that posits that the entire global ecosystem will collapse if we don’t maintain a minimum of 14 different species of caterpillars per square acre.

What the free-lunch liberal set cannot seem to process is that animals are a natural resource, which can and should be harvested for human consumption. Take, for example, the new Chinese middle class’ hunger for animal parts, whether it be for the healing power of the rhino’s horn or shark fins for use in delicious soup. Liberal elites, in typical form, have wasted no time casting these incipient capitalists as some sort of Far East hillbillies, the barely civilized equivalent of a resourceful Ozark countryman repurposing a flattened road-kill raccoon for his family’s supper. But anyone with even a passing knowledge of the rhinoceros knows that it is indeed a magical creature with almost supernatural powers of good fortune, as evidenced in this recent photograph of one leaving a Las Vegas casino:

To so pompously dismiss even the possibility of hunting these animals for their useful properties is a waste on par with the left’s ceaseless war on coal or Canadian tar sands. While the anti-sportsman wing of the Democratic party would argue that we are in danger of hunting the rhinoceros to extinction, APMAG remains certain that God will send a replacement creature that is both easier to kill and more appetizing as soon as we make room by freeing up rhino habitat.

It is long past time to redefine the way that we think about endangered species. ESEA would require that man fulfill his destiny as Earth’s dominant presence, authorizing a coterie of government agencies and armed citizens to begin wiping these menacingly stupid and unfit animals from the face of the earth.

1 Any ivory farm referred to in this article is of course fictional, because raising elephants solely for the purpose of killing them to harvest their ivory would be immoral and illegal. However, if one is interested in purchasing some ivory, they may want to consider emailing APMAG to arrange a fake tour of the fake facility.

2 “Animal-free” does not actually mean a world free of animals. It just means that, rather than having millions of worthless animals knocking over our garbage cans and giving us malaria, we would eliminate the clutter and simplify the animal kingdom into four “animal groups”: pets, racing, entertainment and edibles.

Get our newest limited-edition T-shirt FREE when you subscribe to our multi-award-winning McSweeney's Quarterly today!

Bring home this jaunty limited-edition T-shirt from illustrator Oscar Grønner FREE when you subscribe by June 20. Available in icy blue or summery green and guaranteed to sell out, preorder yours today.