On Nov. 6, amid the pounding drum circles celebrating the mass legalization of marijuana and the sounds of Queen blasting in celebration of more anti-family gay marriage laws passing, you could faintly hear the death knell of democracy as Barack Hussein Adolf Obama orchestrated one of the great criminal acts in the history of mankind—the theft of the 2012 U.S. presidential election.

In the election’s devastating aftermath, a baffled and appalled Mitt Romney correctly pointed to the many policy gifts that Heir Obama had wrapped in welfare baskets and delivered to youth and minorities as the primary explanation for the incumbent’s victory. From transferring the student loan industry from private banks to government-run syndicates to the bottomless insurance subsidy known as Obamacare, the president all but purchased a second term and triggered the decline of a once great and powerful nation with endless giveaways.

But the extent of Obama’s treachery goes beyond overt promises to hand out fake birth certificates to illegals and force churches to provide their choirs with birth control. In the wreckage of the announced election results, with job creators grabbing whatever pitiable shreds of wealth that they could tear loose from the Obama tax vacuum and boarding the first Gulfstream to the Cayman Islands, APMAG conducted an exhaustive investigation into the Democratic campaign machine’s extensive clandestine operations that won over an apparently ignorant and gullible electorate.

In his ruthless pursuit of voters, Obama abandoned all probity, eviscerating even his sacred liberal ideals in exchange for votes. Those organic bean-eaters who doubt that the pandering president would forsake their sacred left-wing principals solely to win over hard-to-please constituencies need only see this photo of Obama murdering an elephant1 at the Chicago Zoo so that he can carve its tusks into ivory trinkets and win over Chinese-American voters: 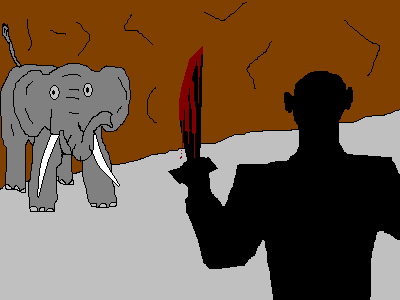 Those who don’t believe that their dear demigod could so ruthlessly abandon all morals in his desperate pursuit of power need only glance at the below pamphlet from an Obama campaign rally in Iowa, pandering to that state’s farm-dwelling voters: 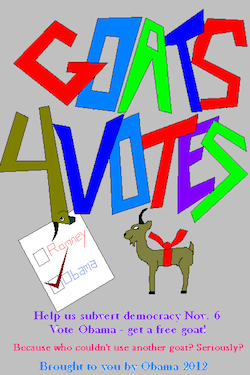 When it became clear to the Democratic establishment that even these odious efforts would be insufficient to keep the U.S.S. Deficit anchored to American shores for another four years, the party turned to old-fashioned voter fraud tactics that surely had the ghosts of Tammany Hall raising their glasses in saloons all over Hell, stuffing ballot boxes, sending impostors to the polls, and most likely murdering little old ladies who they suspected would vote Republican. While the liberal establishment continues to publicly play the naïve, shoulder-shrugging dimwit, insisting that voter fraud is as extinct as the dinosaurs and excoriating Republicans for passing common-sense voter ID laws, one need only look at the below photograph of what is clearly an octopus disguised as a human voter casting multiple simultaneous votes in Wisconsin to know that sophisticated manipulation of the polls is devastating our democratic system: 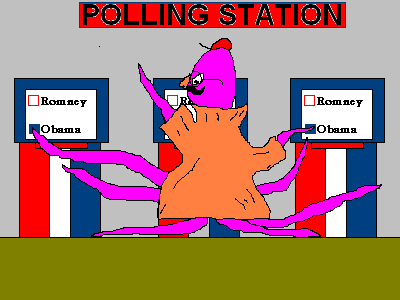 That Obama stole the election is blatantly obvious when the reported outcome is compared to reliable polls conducted by conservative organizations such as APMAG. In the APMAG Truth and Patriotism Poll, we surveyed a diverse cross-section of voters, hailing from places as varied as rural Wyoming, rural Alabama, rural Texas, and Utah. These were voters identified as having previously voted for a range of presidential candidates, including Ronald Reagan, George H.W. Bush, Bob Dole, George W. Bush, and John McCain. They boasted an array of outside interests, from forming local Tea Party chapters to attending NRA meetings to protesting the opening of a local mosque. When polled on questions central to the election, the results were unambiguous: 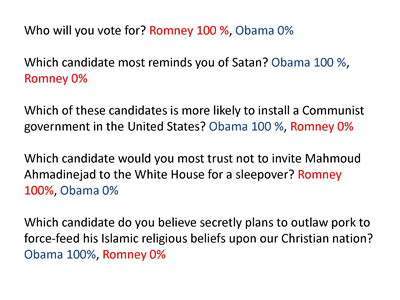 We also polled the same group with a series of fill-in-the-blank analogies, asking them to complete a statement comparing Barack Obama to Mitt Romney. The most common answers to each question appear in parenthesis: 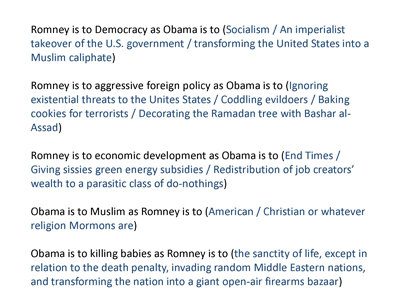 With such overwhelming unanimity of opinion from a diverse coalition of Americans, the election-night results were nothing less than stunning. So why did Mitt Romney lose?

Cynical left-wing collectivists insist that Romney lost because he tacked too hard to the right in his appeals to an angry, old, white base in an increasingly diverse and tolerant nation. Absurd. In truth, Mitt Romney did not lose the election because he was too conservative for the American electorate; he lost because he wasn’t conservative enough. Americans are clamoring for a return to our conservative roots, a collective journey to the ways of a law-and-order society grounded in the great Protestant ideals of our forebears, as demonstrated in this recent photo of a sorority in Kentucky burning a pledge at the stake for taking a walk to the store without a male relative present: 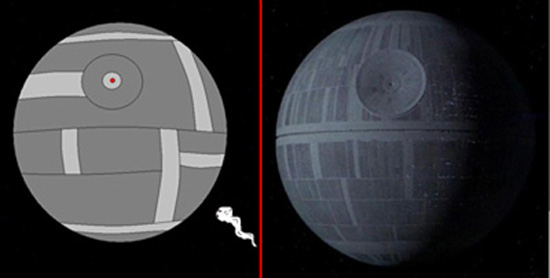 In the sober aftermath of our political nuclear holocaust, extensive analysis leads us to the conclusion that Romney’s center-right shift—with its embrace of abortion exceptions for so-called rape, his radical discussion of peace talks with Iran over a direct nuclear strike, and wild rantings about permitting women to wear long pants2—devastated his chances for election. A modified campaign strategy would have focused on overturning regressive Supreme Court decisions such as Roe v. Wade, Brown v. Board of Education, and Loving v. Virginia; returning historically important conservative linchpins of our society by building two-parent homes, banning sex education in schools, and instituting a poll tax; and investing government research dollars into creating cyborg attack dogs for urban warfare, because seriously how fucking awesome is this cyborg attack dog? 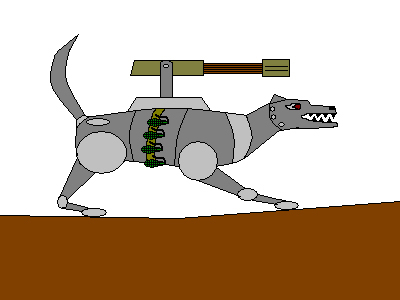 For those liberal lollygaggers happy with our government hippity hopping about the nation with a merry basket of entitlements, Nov. 6 was like the second coming of Franklin Roosevelt. But for the rest of us, a real-life descent into a liberal dystopia is nothing to celebrate. I’ll see you and your money on the next flight to the Cayman Islands.

1 That the man so clearly bent on destroying America would go after the beloved symbol of the party of true Americans is surely no coincidence.

2 While there is no record of Romney actually commenting on this aspect of a woman’s dress code, his wife has been spotted at least once in public wearing long pants, which can only lead us to the conclusion that Mitt supports such radicalism.