Many of you reading this will no doubt go to a Fourth of July parade next week. You’ll set up your lawn chairs next to streets that are shimmering from the heat they’ve been absorbing all morning. The closeness of the crowd may make your T-shirt cling to you a little more damply, and you’ll look around for the nearest sno-cone vendor. Oh, kind parade watcher, do not take for granted the spectacle that is about to march past, for however hot you are, I guarantee that every one of the sousaphone players bringing up the rear of the high school marching band is a hundred times hotter. I have photo evidence: 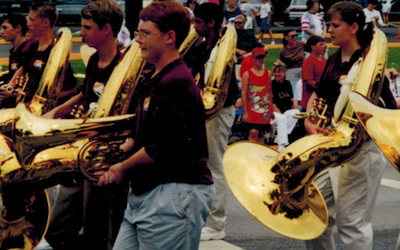 If you’ve been reading previous installments of this column, you know by now that sousaphones are the circular-shaped, marching-band version of the upright tuba. But to end the definition there is to miss out on a whole subculture within the tuba world. There’s something about a wearable tuba that brings out the—goofy? show-off? animalistic? flamboyant? side of the tubist, and when you consider that one must already have a screw loose to choose to play the tuba, you start to realize that the sousaphone is really its own beast.

And it is a beast—at least for me it was. The first time I ever went to put one on in the summer before my freshman year of high school, my little 14 year-old arms couldn’t lift it high enough to get it over my head. The squad leader, as the principal player is called in the world of marching band, had to lift it for me and set it on my shoulder, which, though embarrassing, was okay by me because he happened to be my biggest high school crush, and putting the sousaphone on meant he had to get so close to me I could see myself in the reflection of his sunglasses.

But the weight on my left shoulder was a rude awakening from Mr. Dreamboat. That first band camp week I was leopard-spotted with bruises around my torso where the sousaphone would rest. And as for my left shoulder where the bulk of the sousaphone sat, by the time sophomore year rolled around and the marching band was preparing for a national contest, I went to the doctor for a horribly painful muscle spasm in my left neck/shoulder area. As I was describing the pain, he began to squint in bewilderment at my shoulder. It was one of those expressions you never want to see on your doctor’s face. I explained about my sousaphone playing, and he concluded that my body had actually built a lump of protective tissue at the base of my neck. Indeed, it was visible in the mirror.

The lump went away over time after marching band season, as the doctor predicted it would, and I never gave it the chance to come back: I quit marching band after that sophomore season and have rarely touched a sousaphone since. For the record, though, early in my marching band time, I gained the muscle to put one on, and eventually I could join in with the tuba boys in lifting our sousaphones high in the air, like an overhead press, whenever our team scored a touchdown.

Average brass sousaphones weigh around 30-35 pounds, while fiberglass sousaphones—the white plastic-y ones—are far less, more like 15 pounds. The trouble for me was that our director was so serious about doing well at nationals, he insisted we use only the brass sousaphones, even in practices, so that we would be accustomed to the weight when we shifted directions in marching the show. Whatever. I suppose it could have been far worse: the two major makers of sousaphones, Conn and King, used to produce “jumbo” sousaphones—that’s the actual term for them—6/4-sized horns that weigh more along the lines of 50 pounds.

Jumbo sousaphones haven’t been produced since before World War II, but active collectors are out there, one of whom, Ian Church, even wrote a thesis on them. He prefaces his thesis by explaining how most information on sousaphones, and especially on jumbos, comes from word-of-mouth and from the pages of old brass instrument catalogues. They haven’t exactly been the focus of scholarly studies.

But there’s something very true to sousaphone culture about this simultaneously under-the-radar and in-your-face status. The sousaphone often plays an integral part in university marching band identity, such as right here in my own backyard in Columbus, Ohio: it’s a proud tradition that a senior sousaphone player dot the “i” in the Ohio State script Ohio. And he doesn’t just march out there. No. He joins the drum major in a ridiculous high-kicking step, like a crazed Russian dancer, all the way out to the “i” where he takes his place with big, flourishing bows, exaggerated by the giant bell of the sousaphone. Based on what I’ve seen around town, it also seems to be part of the tradition that a year or so later when nostalgia sets in, he purchases a vanity license plate with a message such as “I dotter” or “I dot I” or some variation thereof which tells the whole world of his moment of glory.

Other universities have traditions where the sousaphone line separates from the band, either to play a particular song or, at Florida State, to “flush” the field by running in a circle around the drum major after a victory. And then there are marching bands that show off simply with size. Purdue, for example, owns an authentic jumbo sousaphone—a King model 1265, if you want to get technical about it—referred to as “Big Bertha” that they bring out only on special occasions (not to be confused with the University of Texas Austin’s giant bass drum also known as Big Bertha).

The marching band that really takes the cake when it comes to instrument size and subculture, however, is Jacksonville State, whose tuba line is referred to as the “20Js” after the Conn model 20J upright recording bass tubas they march. Yep, you read that right—these horns aren’t sousaphones at all but concert tubas of the “monster” variety with forward-facing bells. If you visit the 20Js’ website, you’ll quickly see what I mean by subculture; if the gothic font and “Legends” page doesn’t give you the immediate flavor, their text will:

20J…it’s not just an instrument…
IT’S A STATE OF MIND.

The 20Js’ raison d’etre is the full bass sound that these concert tubas give to the band, a purpose akin to why the sousaphone was invented in the first place. The famous turn-of-the-20th-century bandmaster John Philip Sousa wanted a big bass sound that would project over the rest of the band, and the helicon just wasn’t cutting it. Helicons were the forerunner of sousaphones, but there was a difference in bore construction (tubing shape) and the bell pointed to the player’s side at a 45-degree angle. The sousaphone offered a sound closer to an actual tuba’s, though some of the earliest models didn’t immediately solve the issue of sending sound forward; instead, they had bells that faced straight up, exactly like a concert tuba. These models earned the name “raincatchers.”

Sousa didn’t invent the sousaphone; he simply used the new instrument in his band, thus winning a permanent association with the horn. Sousa himself wasn’t even a tuba player. The son of a Marine Band trombonist, he played a variety of instruments other than tuba and toured with his violin before himself conducting the Marine Band and eventually forming his famous Sousa Band. In addition to the many marches he penned, including all the really famous ones like “The Stars and Stripes Forever” and “Semper Fideles,” he also wrote ten operas and three novels that no one ever talks about.

In Sousa’s day, recording-style tubas and sousaphones had another application: the circus. It’s not what you might think; they weren’t out there amongst the clowns entertaining the crowd. Instead, they were part of the live band that traveled with the circus—quality ensembles with virtuosic musicians who played at least two, 3-hour shows per day. Sousa himself had tried to run away from home at age 13 to join a circus band, but his father enlisted him in the Marine Band instead. Another famous teenage circus-band musician was none other than Harvey Phillips himself, one of the most important 20th-century tuba players, whom you might remember from reading my article about his brainchild, TubaChristmas.

According to Harvey Phillips’s autobiography, the only Sousa composition used in the circus was “The Stars and Stripes Forever,” which the band played as a signal to circus personnel that something was wrong. An infamous instance of this occurred in Hartford, Connecticut in 1944 when a fire broke out. Merle Evans, the “Toscanini of the Big Top,” so nicknamed because he conducted the Ringling Bros. Circus band for 50 years, struck up “The Stars and Stripes” to signal an evacuation and (as Wikipedia tells it so it must be true) kept the band playing as long as they could before themselves evacuating. One hundred sixty-eight people died that day, but the death toll would have been worse were it not for the band.

So, see? Tubas can save lives. Even I, in a sheltered, suburban, not-really-dangerous kind of way, experienced the healing power of a circus band. My senior year of high school, the theater department put on Barnum as the spring musical. I had never played in the pit before because most musicals don’t include a tuba in the score. However, in keeping with the great tradition of circus bands, Barnum calls for a tuba. The second act begins with a tuba solo leading into the number “Come Follow the Band.” The director had the idea to plant me with a sousaphone at the back of the auditorium whence I would emerge to play my solo and lead an actual parade of cast members through the audience and up onto stage.

This is the spotlight-stealing stuff sousaphone players live for, my very own version of an “i-dotting” moment. And I have to admit, the way the audience returning from intermission immediately silenced themselves at my first notes and turned with delight to see where the music was coming from, and then the way it felt to lead the parade, not just by my own meager self but with the glint and dazzle of the powerful instrument perched on my shoulder, the amazing spectacle of a walking tuba—well, let’s just say, it healed many of those former bruises.

So when you’re sitting street-side at the Fourth of July parade, shading your eyes against the beating sun as you watch the line of sousaphones put up their horns, half hiding their faces, just remember this: it may be heavy, it may be hot, but real men bring their own shade.