A Financial Economist Talks About Things We Should Know

In my last column, I focused on sources of national debt. In particular, I expressed my concern that Federal government spending on medical expenses (Medicare and Medicaid) has cumulatively exceeded tax revenues specifically designated for medical expenses (the Medicare portion of FICA taxes) by an amount of about the same magnitude as our national debt. It is my opinion that this situation is not sustainable, and that we need to do something about it if we think that health care represents a benefit, or even a right. To close the gap, we need to either raise additional revenue or reduce spending on medical care. Today, I want to focus on the former, and examine the outlines of the tax policy proposal that Mr. Romney has championed. In particular, I want to talk about the assumptions needed to make the policy “revenue neutral,” as Mr. Romney has repeatedly stated. In short, I want to see how much the economy has to grow in order to “pay” for Mr. Romney’s tax policy proposal.

I should also mention a disclaimer: much like the last time, no jokes in this column. Sorry, I’m just not that funny of a guy.

Mr. Romney proposes reducing personal income tax rates by 20% across the board; the tax rates would move from 10% to 8%, 15% to 12%, 25% to 22.4%, 28% to 26.4%, with a top marginal rate of 28%. Corporate taxes would be reduced from 35% to 25%, and estate and alternative minimum taxes would be eliminated. Mr. Romney suggests that his plan will be revenue-neutral, by which I assume he means that the plan will result in tax revenues neither increasing nor decreasing relative to current baseline levels. Thus, the reduction in tax revenues will not increase or reduce deficits, so deficit reduction has to be a separate issue. In order to make the plan revenue-neutral, Mr. Romney has suggested that he would cap itemized deductions; the exact amount being unclear. The cuts in taxes (before eliminating deductions) would result in a $456 billion decrease in the Tax Policy Center’s projected tax revenues for the 2015 fiscal year; multiplying this by 10 and rounding up is where the much bandied-about number of $5 trillion in tax cuts is coming from.1

So how is this revenue-neutral? As Mr. Romney stated in the presidential debates, some of the revenue derives from elimination or capping of deductions. The Tax Policy Center at the Urban Institute and Brookings Institution has estimated that repealing all itemized deductions from personal income taxes would result in $1.96 trillion in additional revenue if the policy is implemented and kept in place from January 1, 2013 until the end of fiscal year 2022.2 This is where the other number that has been thrown around comes from; that Mr. Romney proposes only $2 trillion in closing of loopholes to finance the $5 trillion tax cut. So where are the other $3 trillion dollars to make the plan revenue-neutral coming from? Or is Mr. Romney simply dissembling?

Let’s assume that he and his advisors genuinely believe that the tax plan will generate the extra $3 trillion dollars nearly by itself. There is only one place that this revenue can come from: economic growth. In order for the tax plan to be revenue neutral, GDP would have to grow by enough to generate an additional $3 trillion in tax revenue over the next ten years. So in order to gauge the tax plan, we need to analyze a bit more closely the assumptions behind the generation of an additional $3 trillion in tax revenues. I’m going to try to explain how one might get there, but in doing so, I am going to have to make my own assumptions. Please be warned! The validity of what I have to say is only as good (at best) as the assumptions that go into my analysis.

I am going to base my projections from Mitt Romney’s tax policy plan on his website, authored by four economists, Glenn Hubbard, Gregory Mankiw, John Taylor, and Kevin Hassett.3 These economists are not only smarter than I am, but are also serious macroeconomists. They cite research that suggests that substantial tax reform could add up to 1% per year real growth in GDP. Now you should be aware that this estimate is highly controversial and that the source of the research is an American Enterprise Institute compilation, which can hardly be considered nonpartisan. And you should also know that there is as much empirical evidence to suggest that tax cuts do not stimulate growth as there is empirical evidence that they do stimulate growth. But lack of empirical evidence is par for the course in macroeconomic research for reasons that I may revisit in another column if given the chance.

Just for the sake of thought, however, I am going to take 1% as a given and assume that the tax cut will result in an additional growth of 1% per year in GDP. To start, I use the Office of Budget Management’s projections for nominal GDP through 2022, and increase the growth rates implicit in these estimates by 1% per year.4 Under this assumption, the projected 2022 nominal GDP would be $28 trillion, compared to about $25.5 trillion per the OMB’s estimates.

Given estimates of GDP, the next step is to estimate what taxes would be if no tax reform was undertaken. Nominal GDP in 2011 was a bit in excess of $15 trillion. Total tax receipts in 2011 were not quite $2.9 trillion, or about 19% of GDP.5 I am going to assume that if no tax changes were put into place, that non-FICA tax revenues would continue to be 19% of GDP. 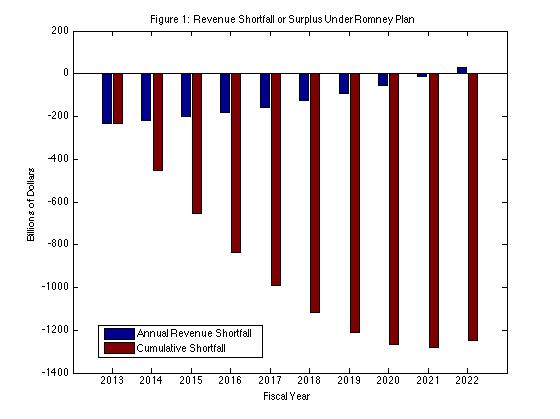 The results of my projections are depicted in Figure 1. In the Figure, I plot the difference between tax revenues that would have been realized if GDP had grown more slowly, but the government collected 19% of GDP in tax revenue and under the Romney plan assuming faster GDP growth and collections of 17.4% of GDP in tax revenue. The figure shows that one could credibly claim that the tax cut would pay for itself if the metric is that ten years into the future, it generated as much tax revenue in that one year as would have been generated with slower growth and no tax cuts. However, in every one of the remaining nine years, the plan generates less revenue, and the cumulative shortfall over the next 10 years is $1.25 trillion dollars. So without any further details about the assumptions behind the tax plan, I can only conclude that it would add an additional $1.25 trillion in debt under the rosiest forecasts about the relation between economic growth and tax cuts and the most draconian and politically unpalatable assumptions about limitations in itemized deductions.

Reading further into the policy plan, the authors estimate that fiscal consolidation and reduction of spending could add an additional 2% to output. Again, while these claims are supported by some research, if anything they are more controversial in macroeconomic theory than the idea that tax cuts stimulate GDP growth. But again, I will take these claims at face value and assume that spending cuts and consolidation could take place the moment that Mr. Romney stepped into office and resulted in an instantaneous boost in GDP of 2% at the end of 2013. The results are shown in Figure 2. In this case, the gap closes faster, with the tax cuts resulting in breakeven revenues in 2020. However, we still incur a total shortfall in tax revenues of $484 billion. 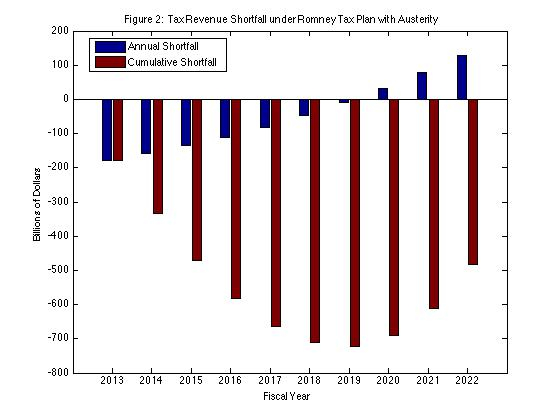 What is the magic number? How fast does the economy have to grow in order to make the tax plan revenue neutral? The answer turns out to be 6.775%, or about 4.775% real GDP growth per year, assuming 2% inflation. Another way of saying this is that real GDP would have to grow by 58% over the next 10 years. So is this realistic? 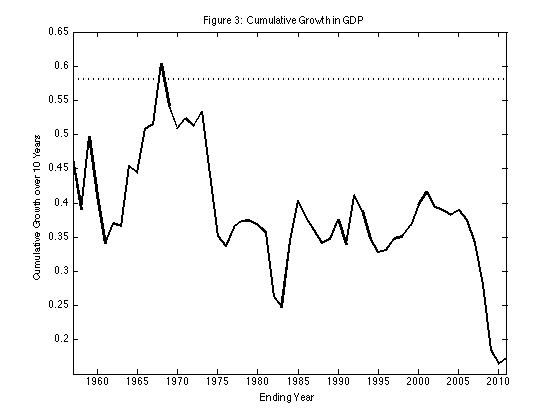 What to conclude? I would suggest that narrowing the gap between the tax revenues lost from the Romney tax cut and the revenues we would have otherwise gained could theoretically be achieved. But doing so would require an extremely harsh and politically unpopular elimination of itemized deductions. Even with this elimination, the economy would have to grow at a rate that is unprecedented in the post-1960s world. I think there is relatively little evidence to support the conclusion that growth alone would close the gap. But I suggest you analyze the evidence and draw your own conclusions.

5 GDP and tax receipts are from the NIPA tables at the Bureau of Economic Analysis, www.bea.gov.