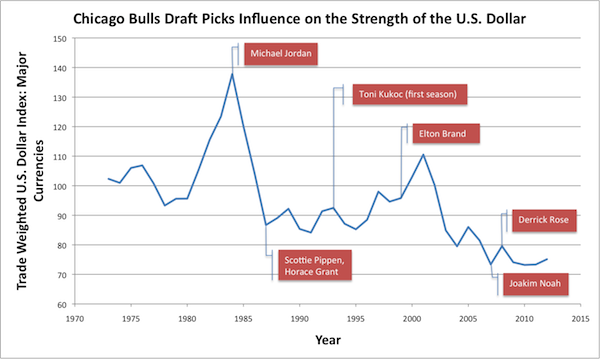 It’s the summer of 2012. The economic recovery has stalled, and the Chicago Bulls have suffered cataclysmic injuries that will severely impact their upcoming NBA season. In the shadow of these misfortunes, Americans have been forced to ask themselves some tough questions. How do we both revive the economy and survive a season in which Derrick Rose will miss significant playing time? What role does monetary policy and the NBA draft play in resolving these issues? Could it be that our hopes for near-term economic relief and advantageous playoff positioning really rely upon the Bulls’ 19-year-old rookie point guard Marquis Teague?

There are two policy methods commonly used to weaken the dollar: 1) The Fed can lower interest rates, or 2) the Bulls can draft well. The problem with the first option is that interest rates are already absurdly low, leaving little room for the Fed to maneuver. That leaves only the second option.

With Chairman of the Federal Reserve Ben Bernanke and Secretary of the Treasury Timothy Geithner powerless to manage the value of the dollar, the responsibility to save the economy now falls upon Chicago Bulls owner Jerry Reinsdorf and general manager Gar Forman. Historically, the Bulls management has been able to weaken the U.S. dollar by occasionally making excellent draft decisions. After these successful draft years, the United States experiences an increase in net exports, and the Bulls’ improve chances for playoff success.

The best example of the Bulls ability to influence the dollar occurred in 1984. The U.S. Dollar Index (USDX) had its highest ever year-end close at 137.78. With the dollar outrageously expensive, exports began to slow and the trade deficit climbed skyward. Fortunately for the Chicago Bulls and the United States, something special happened that year–Jerry Reinsdorf and Rod Thorn drafted Michael Jordan out of the University of North Carolina. For this history-altering draft day decision, the Bulls were rewarded with six championships in the 1990s. Nearly as important, the U.S. economy was also rewarded as the value of the dollar dropped 62% between 1984 and 1990, generating an 86% increase in exports and a 54% reduction in the trade deficit. Indeed, one might say that the Bulls drafting Michael Jordan was the single most important economic event of the late 20th century.

Of course, the Bulls’ draft day acquisitions aren’t the only factor affecting the value of our currency. For example, the 39% drop in the dollar’s value between 2001 and 2004 had as much to do with the selection of Elton Brand in 1999 as it did the coincident recession and subsequent low interest rates set by the Fed. That said, the value of the dollar has fallen by an average of 13.6% in the three years following every exceptional draft acquisition’s first season (1984, 1987, 1993, 1999, 2007, 2008). With a track record like that, it’s a wonder that the Bulls’ management doesn’t have a seat on the Federal Reserve Board of Governors.

Whether it is Pippen and Grant in ’87, Kukoc finally joining the Bulls in ’93, or Noah and Rose in ’07 and ‘08, the trend holds true—a strong draft for the Chicago Bulls reduces the relative strength of the U.S. dollar and subsequently spurs a jump in U.S. exports. And while it may be argued that a weak dollar isn’t always in the United States’ best interest, one would be hard-pressed to make such an argument against the current economic backdrop. There is no way around it: it wasn’t just the Bulls 2012-2013 season hanging in the balance on draft day. It was the American economy too.

On June 28th, 2012, with the 29th overall pick in the NBA draft, the Chicago Bulls selected Maquis Teague out of the University of Kentucky. Some NBA analysts believe Teague is a poor choice. They say he is more athletic than he is skillful, and his utility as an NBA player may be minimal. Let’s hope they’re wrong. If the Bulls’ 2012 NBA draft selection turns out to be a bust, expect the value of the dollar to rise, net exports to drop, and the Bulls to earn an unfavorable seed in the playoffs—if they reach the playoffs at all.