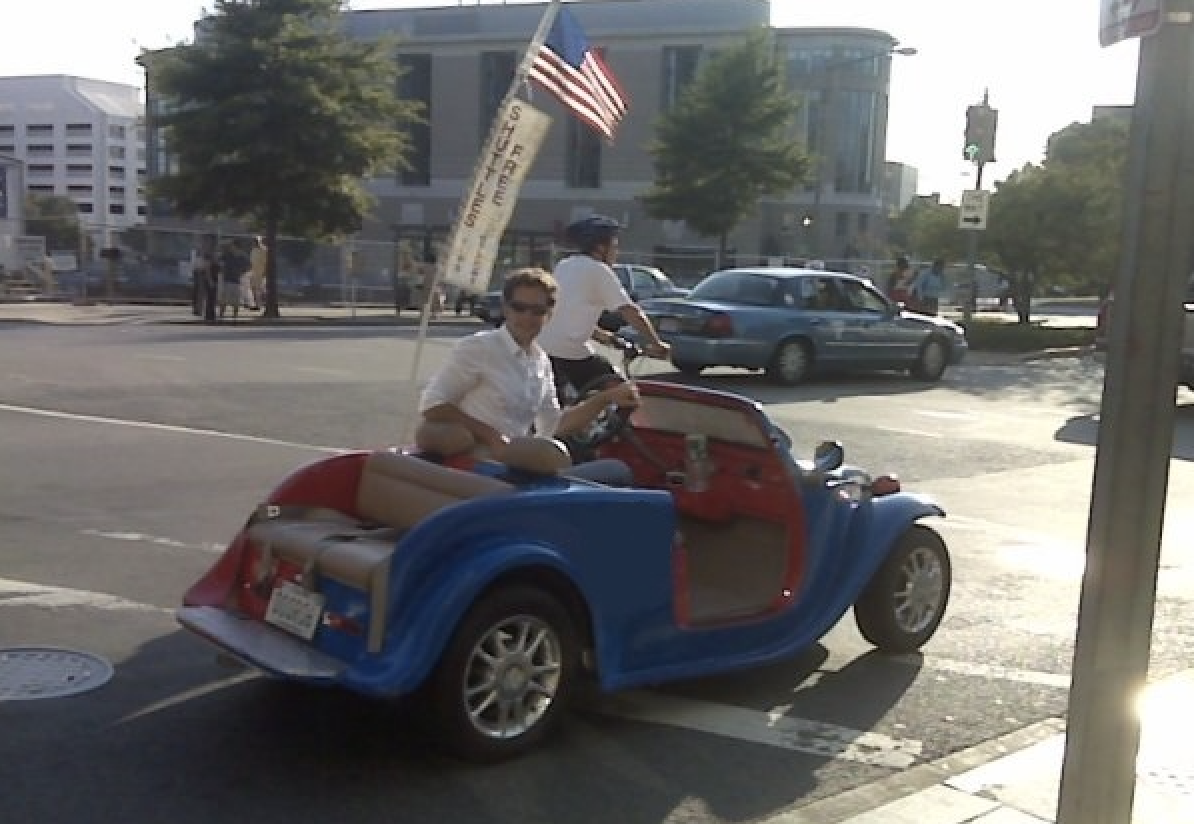 Q: When did you drive a tiny car?
A: It was 2008. I remember because I was too young to get my Chinese visa renewed right before the Olympics came to Beijing. I was only 23 and they wouldn’t renew visas for people younger than 25 years old.

Q: You were teaching English in China at the time?
A: Yeah, I was a high school teacher. They actually made me head of the department at 23.

Q: It’s all been downhill from there I assume?
A: Oh, just steep, steep downhill.

Q: So what’s up with the tiny car?
A: I lost my job because of the Olympics and I thought I would just spend my summer in D.C.

My friend had been my manager when I was a tour guide during college, and he decided to take a risk, to go out on his own, and purchased three electric roadster cars.

It was supposed to be a tour company, but for some reason, the entire summer, the company only got one tour. So mostly, I’d just drive around town with a sign on the front of the car that said FREE RIDE and I would give people rides, and they would often give me tips.

Q: What was the car like?
A: It’s technology that I assume is outdated now. But they were electric engines put on the chassis of golf carts, and they had a custom body to make it look like an old-timey California roadster.

Q: Do you need a permit to do that?
A: I would say you need between three and six permits to do that.

Q: Did you get any crap for that?
A: Yeah, from the Park Police.

In Washington, D.C., there are something like forty different police agencies because there are all of these national headquarters for all of these big departments and such. Some police forces are tasked with guarding just one building. And then there are the Park Police who guard the parks. All the other police forces around the mall were friendly or businesslike. But this group took time out of their day to personally threaten me.

I wasn’t surprised, I’d seen them be incredibly mean to various sectors of the population. Especially to old women, they’d get right up in their faces and berate them. So when they yelled at me, I didn’t take it personally in any way, but I did realize this was not a sustainable job.

I actually ended up quitting around the time that one of those guys told me that he personally was out to get me and I realized I was an easy target, driving in a tiny, brightly colored car with a 25 mph top speed. He had a fast car. I had the slowest car.

Q: What? How?
A: The first week was mid-July, and people were really happy to ride around in this tiny car, and I wasn’t afraid of anything, didn’t know the police were after me, and I was more friendly and outgoing.

Each week I made $100 less. Then I realized it was a highly seasonal thing. The normal tip was like five or ten dollars.

Drunk people in Georgetown who were unaffected by the value of money would give me $20 for 500-yard rides, which is why I started spending nights in Georgetown.

Q: Tell me some of your most-repeated DC facts.
A: I’ll never forget that the Washington Monument is 666 feet tall… Wait, that would be an insane number. Hmm…

I do remember that every building in the city has to be shorter than The Capitol building, which is 288 feet tall.

Q: So you’ve seen both?
A: No, I only saw 2 and I read the reviews. There was a pretty strong consensus that Cocaine Cowboys was the real deal, and 2 was just trying to keep the steam going.

Q: Anyone else you remember?
A: The only time I did a day tour of Georgetown, I picked up a tourist couple. Usually, I just gave people a ride from point A to point B, but these people were asking a bunch of questions. I told them I was a licensed tour guide and could give them a tour. They said, “Sure,” so I thought up a tour for them.

The big finish I had planned would be to take them to The Exorcist steps.

I tried to talk up the steps, telling them, “It’s at the end of that movie; it’s a historic, steep staircase.”

The wife put her hand on my leg and looked me in the eye and said, “Demons are real, you know.”

Q: Anything else?
A: Every morning I would buy a more-than-foot-long sandwich at a Safeway supermarket and then I’d eat it throughout the day.

One time some girls on the sidewalk saw me and they started yelling, “Look at that tiny car!” and I was eating this huge sandwich and driving a tiny car, and I had to stop at the light in front of them.

I looked over at them and said, “The other half of the week, I drive a huge car and eat tiny sandwiches.”

Q: Perfect. So how did it end?
A: I told my friend I couldn’t do it anymore, that the season was over.

After that, I applied for a job to help an elderly woman take her pills, but her daughter owned a medical device company. So at the end of the job interview I was hired, instead, to be the executive assistant to the president of the company. I still made sure that the pill routine ran like clockwork, though.