On Friday November 22nd, 1963, John F. Kennedy was assassinated, something that would have probably gone unnoticed except for one small fact: he was the President of the United States. The truth regarding the killer (or killers?) and the motive (or motives?) has been argued over by conspiracy theorists and conspiracy debunkers ever since that fateful day in Dallas (or San Antonio?).

The conspiracies dealing with the assassination are plentiful and varied, much like the number of Kennedy family summer homes. I’ll shine a light on several theories, because truth is much like the honest moth: It cannot help but be attracted to the light of logic and discovery, and it has a lifespan of about a week, longer in the winter.

Conspiracy Claim: Footage of the President’s head movements after being hit depict him being shot at an angle that does not correspond to where Lee Harvey Oswald was supposedly shooting from, therefore there had to be a second shooter, most likely on the grassy knoll.

Debunking Claim: Numerous ballistics tests have proven the President’s head movements correspond directly to a bullet fired from Oswald’s position in the book depository. In fact, all of the shots can be, and are, attributed to Oswald. There was no second shooter.

Rebunking Claim: One shooter? Wrong. Two shooters? Doubly wrong. There weren’t any shooters at all. Then how was he shot? Simple: sentient, self-propelled bullets. In 1963, it was becoming obvious that Kennedy would never support a massive war in Vietnam, a massive war that would require the production of an absurd amount of what? You guessed it, unless you guessed something other than bullets, if so, try again and say bullets. Three bullets somehow (magic? Most likely) achieved the power to think and fire themselves. The bullets took out Kennedy, knowing his successor, Lyndon Johnson, would support a full-out war in Vietnam, thus creating the production of billions more of their bullet brethren. Oswald was merely in the wrong place at the wrong time with the wrong rifle out in public. 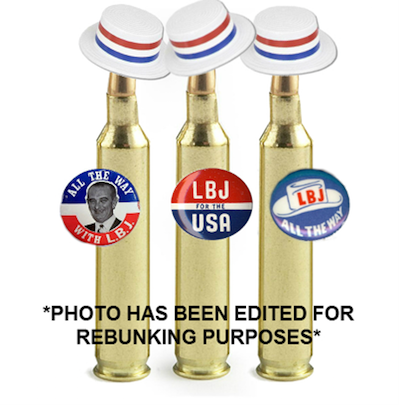 Conspiracy Claim: Pictures of Oswald looking slightly different and witnesses claiming to see him in places he couldn’t be prove that a government agent had been impersonating Lee Harvey Oswald for years so that after the assassination, the true, and innocent, Lee Harvey Oswald would take the fall.

Rebunking Claim: Much like in Fight Club, Lee Harvey Oswald was both one person AND another person. That “other” person was a projection of his inner-psyche, but was also named Lee Harvey Oswald and looked very similar to him and did everything the original Oswald did. What strengthens this claim is the fact that guns are involved in both Fight Club and in the JFK assassination, and that both have happy endings. 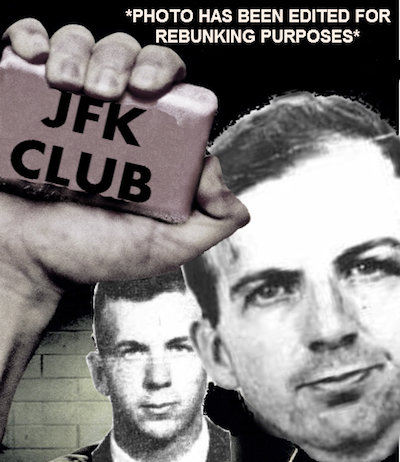 Debunking Claim: Eyewitness testimonies are notoriously filled with innocent mistakes and fabrications, plus footage of the event disproves most, if not all, accounts that go against official reports. Also, simply because a witness does not come forward does not imply foul play.

Rebunking Claim: The claim that eyewitness testimonies are flawed is derived from eye witness testimonies of people delivering eyewitness testimonies, making it as flawed as a diamond made out of mistakes. The witnesses that never came forward don’t fear misremembering, they’re embarrassed of telling the truth: they were all blinking when Kennedy was shot and missed one the most important moments in American history, the only part of history that matters. Living with that guilt is difficult without the entire world knowing. They have a hard enough time answering their grandkids’ “Where were you when Kennedy was shot?” questions with a curt “None of your damn business!” or a “Why?! Who sent you? CIA? NSA? ANSWER ME OR I’LL BLINK AND YOU’LL DIE!”

Conspiracy Claim: Secret Service agents did not cover the President with their body, weren’t adequately prepared for a possible sniper, and were generally negligent, proving they were complicit in the assassination.

Debunking Claim: The House Select Committee on Assassinations ruled that the Secret Service had been deficient in their duties, but were not involved in the assassination. There are also several sources that claim Kennedy ordered them to be discreet while in Dallas.

Rebunking Claim: Until 2003, the Secret Service was part of the U.S. Department of the Treasury, meaning America’s tax dollars were foremost in the minds of agents. Throwing their clean-suited bodies on top of an already bloody President would lead to average Americans fronting an outrageous dry cleaning bill. It was more fiscally responsible to simply let the President die. 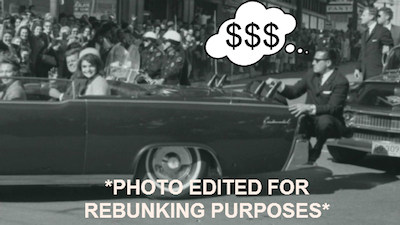 Conspiracy Claim: The Zapruder film, described as the best recorded evidence of the event, is a sophisticated forgery used to spoon feed the public a false history.

Debunking Claim: Film engineers have studied the film and declared no evidence of manipulation or image alteration.

Conspiracy Claim: Dallas police identified and signed an affidavit claiming the murder weapon was a 7.65 mm German Mauser rifle, while officially the rifle that Oswald allegedly purchased and used to assassinate the President was a 6.5 mm Italian Carcano rifle. Either Dallas police were complicit in the assassination and attempted to provide confusion or they found the true murder weapon.

Rebunking Claim: The 7.65 mm German Mauser and the 6.5 mm Italian Carcano are the exact same rifle. In fact, there has only ever been one type of rifle ever manufactured. Different countries of origin, fun model names, and random metric measurements are added to fool customers into buying more and more versions of the same gun, much like how all candy bars are the exact same with slightly different wrappers. It’s no coincidence that C-A-N-D-Y B-A-R and R-I-F-L-E G-U-N have the same number of letters since the two industries are in cahoots. Big Rifle and Big Candy knew Kennedy would reveal this scandalous information in the extremely unlikely scenario that he ever discovered it, and had to silence him. After several unsuccessful attempts at having the President eat poisoned Mounds bars (a treat he’d never touch), they decided to go the rifle route. 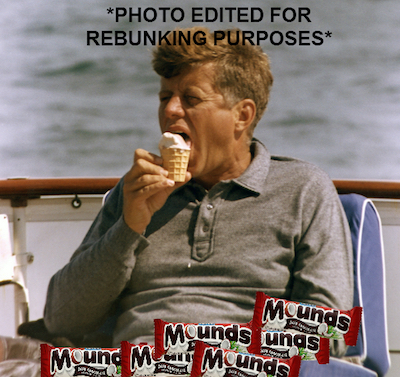 Conspiracy Claim: Lee Harvey Oswald had a notoriously poor shot with a rifle, the rifle he used also was notoriously inaccurate, and nobody has been able to replicate the notorious number of shots Oswald supposedly fired in the notorious time frame given by notorious government reports.

Debunking Claim: Oswald scored as a sharpshooter and a marksman while in the Marines, the rifle was determined to be “quite accurate,” and an Army specialist using Oswald’s rifle was able to replicate the number of shots in a time even faster than Oswald.

Rebunking Claim: That Army specialist probably did it.