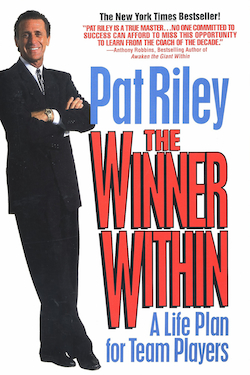 Under Review:
The Winner Within:
A Life Plan for Team Players
by Pat Riley
(1993, Berkley Books, 270 pages)

It’s a bit difficult to compute that NBA executive Pat Riley is a real, 24-hours-a-day human being, seeing as he so uncannily resembles the antagonist in a kids’ basketball movie, a cuff-linked, slick-haired Mafioso who plots barely-legal basketballing deviancy from the baddie team’s bench.

As the NBA’s best-ever approximation of a Brando mob boss, Riley has been fortuitously present at many of basketball’s biggest moments throughout the last half-century. In the sixties he appeared in the NCAA Championship Game as a player for the University of Kentucky; in the seventies he won an NBA Championship while playing for the Los Angeles Lakers; he won five as a Lakers coach in the eighties; coached the Miami Heat to another championship in the aughts; and orchestrated perhaps his greatest-ever achievement in this decade, signing LeBron James and Chris Bosh to play alongside Dwyane Wade, an arrangement that has yielded, so far, two more championships.

The Winner Within was written and published during the nineties, a decade that was influential if not fruit-bearing for Riley. He spent the time coaching both sides of the New York Knicks-Miami Heat rivalry—a matchup known for games that transpired with the grace and physicality of a prison mutiny—blocked from access to yet more championships by the transcendent reign of Michael Jordan. I will nonetheless assume that The Winner Within’s teaching truths are timeless, even though Riley boldly writes, “We live in a VCR world.”

The yin to Riley’s yang—probably the lovable-oaf, comedic-relief coach in this PG-rated b-ball movie—is clearly Phil Jackson, the Zen Master, Michael Jordan’s coach, the owner of the most championship rings in the NBA’s history, beating Riley 13-9 even though Jackson sauntered off into retirement three years ago. Relentlessly positive and almost totally unflappable, Jackson’s first self-help book was called Sacred Hoops, an appropriately mystic title, in which he chronicled his methods of leading team meditation sessions to unify his NBA rosters. Jackson spent his off-seasons and currently spends his retirement on his spacious and secluded Montana ranch, a necessary detox and commune with the elements after so much time spent in urban (in the strictest, population-density meaning of the term) gyms.

By way of contrast, here is how Riley sets up an anecdote about a river-rafting trip that he and his wife took with friends, their collective paddling held up for us readers as a sterling example of positive teamwork:

Some of the group—us included—probably hadn’t packed our own suitcase, washed our own dishes, or turned on our own bathwater in years.

Inordinate wealth is simply a fact of the modern NBA. Usually we can rely on the NBA players to smack us over our poor plebian heads with their wealth, either importing camels for their birthday party (as Bosh did last year) or opening up their dedicated walk-in sneaker closet for a television segment, or never appearing off-court in the same, GQ-ready outfit twice.

But Riley only played in the league for a few years and, in that day, the player salaries were sustainable but far from lavish. He’s earned all of his cash as a coach and executive. And still he crouches primed and waiting for you to walk into this book so he can bonk your noggin with his briefcases of money, and papercut the webbings between your fingers with Black Gold Exclusive Membership credit cards. Whether it’s anecdotes about his motivational speeches to an “agricultural commodities” manufacturer in the Midwest or the mental image of him verbally chastising a maid as she fails to achieve the optimal hot/cold warmth combo for his bubble bath or that doggone gel-sticky hair staring back at me from the cover, reading The Winner Within requires acknowledging and submitting to Riley’s wealth, wealth, wealth.

The structure and syntax of The Winner Within was clearly born and raised to be effortlessly transported from Riley’s word processor to presentation slides projected in the front of hotel ballrooms; a publisher’s-advance/speaking-fee double-whammy. When Riley really taps into his self-constructed lingo, when he dives deep into a buzzword pile of his own making, the end result has the same disjointed non sequitur-ness of an Internet comment dropped like a turd from behind a SpamBot:

After being hammered by Thunderbolts, the team feels both discouraged and victimized, while it hungers to recapture the solidity of the Covenant and the success rush it once knew in its Innocent Climb.

One can basically see Riley gesticulating across the stage in Fresno, Tucson, Fort Lauderdale, really getting into the rhythm of his pitch in front of a room full of business-y aspirants all eagerly scribbling down the key phrases with a complimentary, conference-logoed ballpoint pen.

Riley and Jackson are living, breathing antitheses of each other’s proven winning formulas. (The two have never worked for the same team because, let’s be honest, what town could really be big enough for the two of them?) Jackson gently conjured a deep personal best out of each of his players by creating a supportive and nurturing environment, conducive to self-expansion. Riley wrung his teams out like a towel, white-knuckling every last drop of talent and effort out of his teams, whether they wanted to do so or not.

The world’s foremost authority on the rival Jackson v. Riley schools of thought is, blessedly, Shaquille O’Neal, who won championships under the direction of both coaches. In his authoritative, career-spanning memoir, Shaq Uncut: My Story (2011, Grand Central Publishing), Shaq does not hesitate to make clear whose methods he preferred, referring to his favored coach as “the great Phil Jackson” and calling Riley’s (in-demand!) motivational speaking “all BS.” Shaq shares some uncomfortable details from Riley’s time as a Heat executive:

Even when Pat wasn’t coaching, it was definitely his team. He was there, all the time, probably drawing up plays in his office. His office overlooked the court.

He had cameras everywhere. Cameras on the practice court, cameras in the locker room, probably even cameras in the bathroom. He wanted to know everything.

Riley is dealing with grown adults here, adults who have spent a disproportionate amount of their lives getting yelled at by other power-hungry coaches. The starkly dystopian vibes had to wear transparently thin in a hurry. Shaq continues by dishing dirt on Riley’s motivational techniques. Phrases like “Innocent Climb” might go over well with a crowd already willing to sit themselves down and listen to a motivational speaker, but what about in a room full of giant men making millions of dollars a year?

One day he gave us a speech on how no team can truly succeed unless people are willing to sacrifice. He walked into the locker room with a freezing bucket of water. He put his head in the freezing water for something like two minutes. Everyone was trying not to laugh.

The real power in that illustration, though, if Shaq had been paying just a little bit closer attention, was that Riley was willing to humble himself in front of the team, for the sake of winning, by intentionally messing that most elite and gentrified of symbols: his slick, immobile hair. Riley’s question, the one he asks now across the negotiation table just as he did when he stuck his head in a bucket, to everyone around him and also to himself, is: do you want to have fun, or do you want to win?