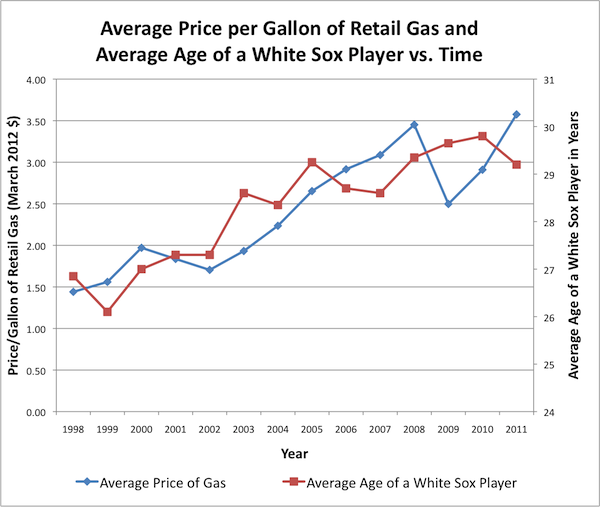 Let’s start with a fact: the average price of retail gas in the United States is now over $3.94 per gallon.

Not surprisingly, both Mitt Romney and Rick Santorum have used this fact to their advantage by claiming President Obama is at least partially to blame for the high price of fuel. Not to be outdone, Newt Gingrich has gone a step further and claimed that, if only he were President, the price of gas would sink to $2.50 per gallon. These claims are based on the premise that the President of the United States is in a position to meaningfully influence the market price of gasoline.

That premise is, of course, absurd.

The cost of gasoline is not significantly influenced by the President of the United States. Indeed, soaring fuel costs is but one of the many trends opportunistic politicians have traditionally attempted to the associate with the incumbent President in the hopes of creating a plausible narrative to justify their hackneyed talking points. In a sane world, these forced correlations would be immediately identified as coincidence and their proponents shamed for assuming their constituents were naive enough to believe them. Alas, whether it’s Bush in 2007 or Obama in 2012, there are no coincidences in politics, only clearly avoidable policy lapses and their disastrous repercussions.

The truth is gasoline prices are affected by myriad factors, the combination of which dwarf the impact any one President can make over the course of a single term. Sure, opening land for drilling could lower the cost of oil to some degree over the medium-term. And, yes, removing environmental regulations might–-might–-marginally reduce the price at the pump. But these spurious and potentially hazardous policy decisions have negligible influence on the overall trend of gas prices.

Even among pundits who readily admit that the President has very little influence on the price of gas, there is an unwillingness to grapple with the root cause of rising energy costs. Instead, pundits find it easier to parrot the trite story that oil prices are simply a victim of chaos overseas. While uncertainty in the middle east does impact the market, it is not the reason Americans find themselves spending more of their income at the gas station.

What, then, is the primary driver of rising fuel costs? The answer, while difficult to capitalize on politically, is straightforward: since 1998, the major contributor to the price of gas has been an aging Chicago White Sox ball club.

To illustrate the point, the price of gas has increased from $1.44 in 1998 to $3.94 in 2012, adjusted for March 2012 dollars. The consistency of this rise allows us to rule out the political affiliation, environmental consciousness, and personal motives of any particular President as a major factor. Clearly, something bigger is at work here.

Over that same time period, the Chicago White Sox have gone from a roster with an average age of 26.85 years in 1998 to 29.2 years in 2011. Due to the White Sox’ magnificent World Series victory in 2005, concern over rising ages and fuel costs didn’t particularly bother White Sox fans or Americans at large. And nor should they have-–Jerry Reinsdorf and Kenny Williams built some good teams between 2000 and 2005.

Since 2005, however, White Sox teams have been generally mediocre and, as the chart above indicates, getting older. By 2010, the average age of a White Sox player was up to 29.8 years, the fourth highest in the league. By 2011, the price of gas skyrocketed to $3.58 a gallon, and it is no wonder why.

The baffling twist to the Republican’s faux fusillade on Barack Obama’s energy policy is that they actually do have a legitimate gripe on the subject, even if they fail to recognize it: Barack Obama is the world’s most powerful White Sox fan. Obama was an Illinois State Senator between 1997 and 2004 and a U.S. Senator between 2005 and 2008. It was during these years that, while occasionally punctuated with brilliant baseball, the White Sox slowly aged and created the situation in which we currently find ourselves mired: $3.94 for a gallon of gas. One would think Obama might have held enough sway with Chicago’s sports leadership to successfully warn them of the national impact of signing big contracts for aging, once-great players.

The bottom line is that the President has little influence on gas prices outside of calling up Chicago White Sox General Manager Kenny Williams and demanding fresh talent be brought up from the minors to replace the pricey veterans on the current squad. Looking at the 2012 roster, perhaps that’s exactly what has happened–-the average age for a White Sox player has dropped to 28.1 years. That may not be a big enough decrease to bring the price of oil down to a reasonable level, but it certainly can’t hurt. And who knows, maybe these young guys can hit.

“People Want to Live is the work of a thrilling and essential new voice.”
—Laura Van den Berg

People Want to Live is out now

“Each story has the emotional heft of a novel…. [In] People Want to Live, countries and ideologies may demarcate boundaries, but the heart knows none.”—Elaine Chiew, Foreword Reviews
Order today.