“President Trump’s physician said Tuesday that the president received a perfect score on a cognitive test designed to screen for neurological impairment… Mr. Trump received a score of 30 out of 30 on the Montreal Cognitive Assessment, a well-known test” — New York Times, 1/16/18

“I’ve found no reason whatsoever to think the president has any issues whatsoever with his thought processes.” — White House Physician, Ronny L. Jackson

JASON: I am stressed, Todd! I mean, I’ve been studying for the past eight hours and I still can’t figure out this dang test!

TODD: Ha. I’ve been there! You know, when I was studying for the LSAT, I couldn’t understand even half the questions… Now that was a hard test!

JASON: Well, now I’m in the exact same boat! See, I’m brushing up on the MoCA right now. And it is kicking my butt!

JASON: Oh, sorry. The Montreal Cognitive Assessment. And, boy oh boy, is it a stumper.

There is a pause.

TODD: I’ve, um, never heard of that test before, Jason… is it anything like the LSAT?

JASON: Kind of! You see, it’s like the LSAT. But instead of being an in-depth, comprehensive examination that gauges your mental competency in a specific field… it’s, you know, a one-page-long, ten-minute Q&A designed to test whether or not people have late-stage Alzheimer’s disease! They’re basically the same thing!

TODD: Hey, do you mind if I take a look at that test for a second, Jason?

JASON: Oh, definitely! But don’t say I didn’t warn you!

TODD looks at the test. He flips it over. The other side of the test is blank. The test is only one side of a single piece of paper. TODD pauses again.

TODD: Jason, I’m not sure I understand—

JASON: Right? Now you see where I’m coming from! I mean, just look at that first section.

JASON: No, Todd. Not the “doodling part.” It’s called the “Visuospatial/Executive” portion. And it is kicking my butt!

JASON: HA! I wish I was joking! No, this is definitely a real question on the MoCA. All of these questions are real. And they’re really killing me! Seriously, Todd, anyone who gets 30 out of 30 points on this test must obviously have no cognitive impairments whatsoever! This test is clearly the end-all when it comes to figuring out whether or not someone is mentally qualified for the job that they currently hold.

There is another very long pause.

TODD: Well, at least they added an animal section… You know, like the one on the LSAT.

JASON: No! Way! There was an animal section on the LSAT too?!?!

TODD: No. Of course there wasn’t. The LSAT is a real—

JASON: Oof. I just can’t wrap my head around this darn test. This must be what people in Mensa do when they’re looking to get stumped!

JASON: I mean, seriously, the only reason (and I mean the only reason) anyone should take this test is if they had the hardest job on Earth. And even then, there’s no way they’d be able to get 100 percent! The Montreal Cognitive Assessment ISN’T just a medically-insignificant test for people in the final, meandering stages of dementia. No. It’s the real deal! It’s something you should be able to brag about!

TODD: Well, at least the memory portion is a little tough…

JASON: Yeah, I know. Thank God it isn’t for any points.

There is another pause. An extremely long pause. JASON stares at the test and there is the sound of one, single piece of paper rustling. The test is only one page. It rustles softly.

JASON: Can’t blame you, man. I mean, unless you want to spend the next eight hours studying “Attention,” “Language,” “Abstraction,” and “Orientation,” I’d get out of here too! Seriously. This test is kicking my butt! 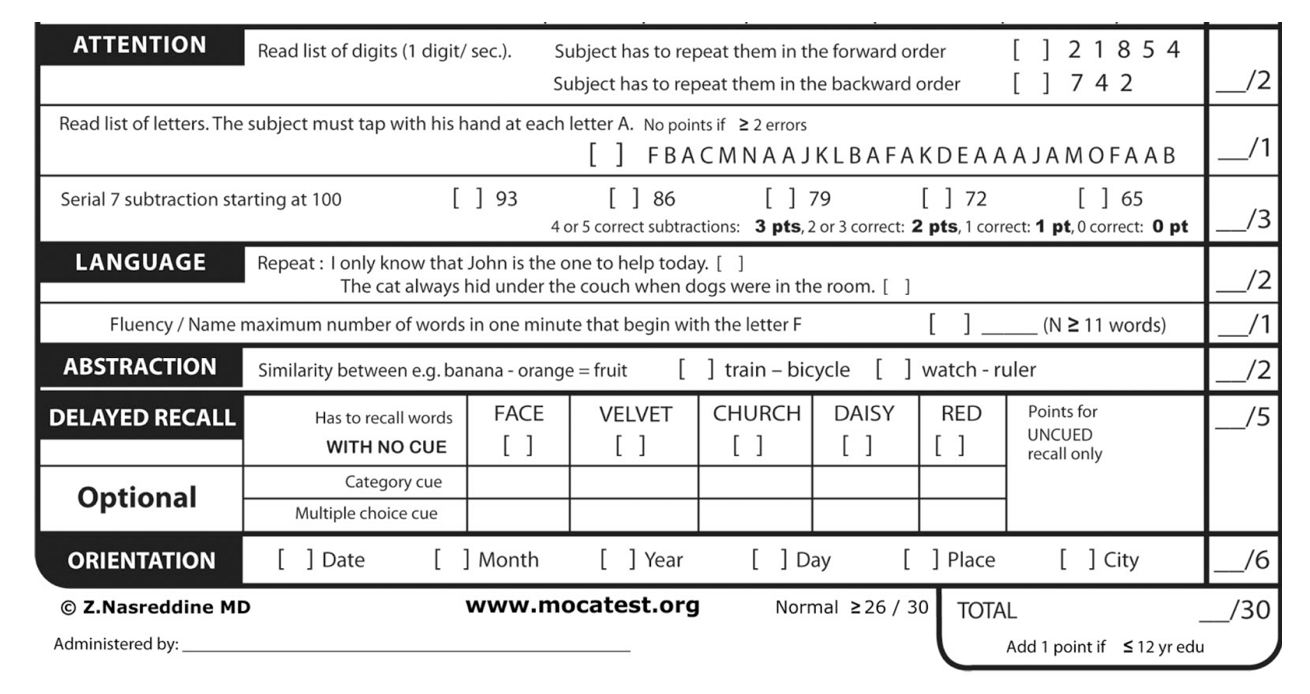 TODD exits. JASON continues to look over the test. After another long pause, JASON mutters under his breath.

JASON: You are my Everest, MoCA.