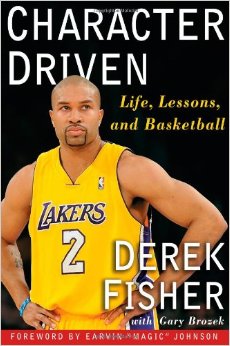 And here we have what is (as far as I am aware) a dramatically new development, not just in the field of Self-Help Books by Professional Athletes but in memoirs and authorized biographies as a whole: a central subject who has agreed to release a book about his life, while, simultaneously, resisting any introspection whatsoever. In fact, the central subject of this book appears to be entirely devoid of any tangible internal life—and, compellingly, seems to be painstakingly aware of that absence of a personal emotional landscape. By confessing that he has not had essential conversations with the family members closest to him, Derek Fisher is at once rebuffing his own attempt to share his life for public consumption, while also confessing the deepest and most intimate secret that he possesses.

Derek Fisher has had, quite simply, one of the most accomplished NBA careers of all-time. Fisher is the only player, alongside Kobe Bryant, to have won all five championships won by the Los Angeles Lakers in this century.

While Fisher’s contributions extend to the well-timed three-pointer instead of the ball-dominating brilliance of Bryant, it’s not as though Fisher was simply grabbing onto an opportunely placed coattail. The only player to have won all six championships alongside Michael Jordan was Scottie Pippen, and Pippen is unanimously considered one of the fifty best players to ever set sneaker on hardwood. While Fisher’s individual talents do not shine nearly as bright as Pippen’s, one does not stick around a championship-caliber team for so long without bringing some significant gifts to the table.

Namely, Fisher provides “character” and “toughness” and “intangibles” for his team. These are descriptors usually reserved for—well, those adjectives tend to be exclusively bestowed upon white players. Lacking, apocryphally, the athleticism and rhythmic instincts of black players, white players are credited with providing these hustling, character-filled attributes, attributes that inspire so many jowly broadcasters to wax endlessly about said player’s (supposedly) superior moral character. The uninitiated basketball-watcher would be forgiven for thinking that hustling in pursuit of rebounds qualifies one for sainthood.

Perhaps it is some significant moment of racial reconciliation that Fisher is blabbed on about in all of the same ways. (Probably not.) What’s also true, though, is that in Fisher’s world, “character” is not used to produce, say, the blossoming fruits of meaningful relationships and the bloom of a holistically good and contented life. In Fisher’s world, having “character” usually means just being a rigid hard-ass about as much stuff as possible. In Character Driven—ah, what a title—we don’t hear any anecdotes about the friendships that are so famously formed in the cauldron of competitive team pursuits. Actually, Fisher doesn’t even talk about his time in the NBA that much whatsoever, as he invests a single paragraph in discussing the Lakers’ 2001-02 championship season. Mostly, we just hear Fisher unwittingly delve into the tangled psychoanalytic forest that is his relationship with his father—a champion hard-ass, it seems. So mechanical was Father Fisher’s hard-assery that Derek is reduced to discussing the mushy goop of his own thoughts and emotions in terms of purely mechanical processes.

When Derek looks back at his hard-ass upbringing in Little Rock, Arkansas, he talks about the machines of his childhood in such stupefyingly boring detail that I have to believe that these passages are in fact metaphors for something else. Here goes Derek about the lawn chores he had to do as a child:

We lived on the corner, so our lot was bigger than our neighbors’, and it sloped down to the street level on one side. When I was really young, I wasn’t allowed to use the push lawn mower since that slope was dangerous, but I had to clean up after the lawn mower that my dad used. I’m sure that other people back then had lawn mowers with bags attached to catch the clippings, but I didn’t know that. Everybody I knew had a bagless mower.

Even more incredibly, I have abbreviated this passage. This is about half of it. In other words, Fisher thought that people would be just as interested in reading about his childhood lawn-mowing regimen as they would be interested in reading about the operatic highs and lows of an entire NBA Championship-winning season. He also thought that a malfunctioning door on the family car would be equally as interesting (again, this passage is not close to the entire saga of the door that Derek shares):

…[B]ack in 1981 when I was seven years old, we had a 1976 Mercury Montego sedan that my mom drove to work. We had picked it up used, and it must have been in a wreck of some kind because even though it was only five years old, it had some issues. For one, the passenger-side door latch would intermittently malfunction. We always had trouble getting it to close properly. My dad tried to fix it, but he couldn’t, so we adapted to it. We knew that once that door got properly closed, none of us would use it.

Gah! What, really, could be a more mundane subject to talk about?

Fast-forward to adult, NBA-veteran Derek. His infant daughter, Tatum, is diagnosed with cancer in one of her eyes. This is real life. This is serious. (Tatum has, fortunately, made a full recovery since.) And there is something undeniably bizarre about how, when Fisher recounts the moment the doctor told him and his wife about the cancer, that he can only describe the moment in the language of machines:

The sensation was like what happens when you are driving a standard-transmission car and you think you’re in gear but you’re in neutral. You hit the gas and you can hear and feel the vibration of the rapidly racing engine, but you don’t increase your actual speed.

Uh, what? Hearing that your child has cancer is like experiencing a slight mishap when you drive a standard-transmission car? Yeah, probably not—unless you have little gears and pistons in the place where most people have the slimy, dripping chambers of the heart.

I want to let my guard down, let them know that they are welcome to score in my house, and that I’m not going to block their shot and not isolate so much of my life from them.

But is it not revealing that Fisher equates emotional openness with losing a basketball game (he is “getting scored on”)?

Fisher has experienced transcendental moments of adrenaline and euphoria and victory on the world’s biggest and brightest stages of basketball. He has seen so much of the world, and on somebody else’s dime. He has wrung every drop of productivity out of the considerable natural talents he was gifted with. His future generations have financial security like you wouldn’t even believe. And yet, whatever you’ve been doing while Fisher has been playing ball, odds are you’ve extracted a whole lot more fun and meaning from it.