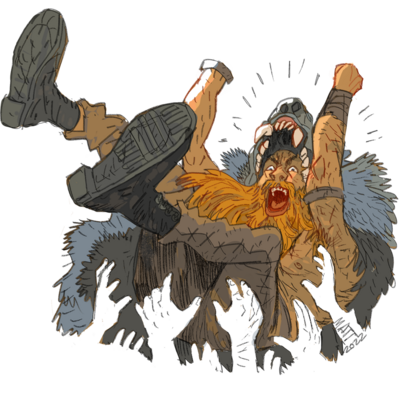 In 2019, an abandoned smartphone was found partially buried beneath layers of sediment and urine in a South Boston alleyway. This forgotten relic was soon revealed to contain a remarkable audio-text describing in great detail the religious beliefs of ancient Scandinavia. Dubbed The Impudent Edda, this oral manuscript was transcribed and released to the general public as Norse Mythology for Bostonians in early 2020.

During the global lockdown that followed the transcription’s release, archaeologists, historians, and philologists continued to study the audio text as well as the device itself, now known simply as the Codex Bostonia. These researchers eventually uncovered an additional stash of hidden audio files stored in a previously secret location on the phone’s memory card. Three of these recently recovered myths have thus far been fully documented and are now being made available to the public here for the first time ever. The breadth of their arcane lore, the depth of their spiritual insights, and the poignancy of their poetic revelations confirm that the collective audio texts of the Codex Bostonia remain the single most important contribution to our knowledge of pre-Christian Scandinavian religious beliefs to have emerged in a millennium.

Now the thing that not evuhryone knows ’bout Tyr is that he’s a total fuckin’ metalhead1 n’ that he especially likes the shit that deals lyrically with vikings n’ ancient pagan deities n’ sacrificial rites n’ whatnot, which figyahs since, yah know, he’s an ancient viking god’ah wahr himself. Just kindah goes hand-in-hand with the whole tehrritahry even though he’s only got one hand himself since he let an evil wolf eat the othah one.2

But Tyr, he’s been intah metal evah since his grandma grew her 900th head.3 Befohr she grew that final head he’d only been intah swohrds, spee’ahs, knives, fuckin’ wahr hammahs, maces, shit like that in tehrm’s ah metal—pretty much anything made outtah metal that could be used tah kill someone with. It was a real mohrbid fuckin’ fascination. But then his grandma popped her 900th head intah r’existence n’ he just couldn’t take all the grandmothahly smothah’rin’ comin’ at him from 900 diffuhrent fuckin’ dihrections all at once n’ so he went n’ he locked himself in his room n’ befohr yah know it he was listen’ tah Sabbath n’ tryin’ tah leahrn tah play guitahr, which I guess he was actually pretty good at back when he still had two fuckin’ hands.

So he gets in his cah r’n he drives out tah fuckin’ Woostah, which he’s really good at even though he only has one hand n’ he’s drivin’ a standahd. N’ so he gets there n’ he pahks his cah r’ovah r’on some shady side street so he doesn’t have tah pay fahr pahkin’ n’ then he walks his ass on ovah tah the Palladium. N’ the guy isn’t exactly incon-fuckin’-spicuous, yah know? Like, the fuckin’ streets ahr pretty empty tah begin with since this is downtown Woostah r’aftah dahk on a Tuesday night aftah r’all n’ the place is a fuckin’ shithole. N’ all the people who’re loitahrin’ ’round outside’ah the Palladium ahr mostly all dressed up in black with their leathah jackets n’ band shihrts n’ shit. But then yah get Tyr who walks up tah the place wearin’ nothin’ but miltahry boots, leathah pants, n’ a fuckin’ bear skin hat/cape thing. But yah know, he’s got his ticket n’ so they pat him down n’ they let him on in n’ he goes straight back tah the lowah bah r’n he begins tah get liquah’d up while the openin’ act plays whoevah they ahr. No one remembahs.

N’ then Týr comes out on stage n’ they open with their song Gates of Hel n’ holy fuckin’ shit does Tyr go nuts. I mean, so does the whole audience, but especially Tyr. He ro’ahrs at the top’ah his lungs, spittin’ out bee’ah, which makes him look like he’s foamin’ at the fuckin’ mouth. N’ then he stahts tah head-bang n’ evuhryone moves away from him ’cause no one wants tah get smashed in the face by some crazy headbangah who’s weahrin’ a fuckin’ bear skull on top’ah his head.

N’ then pretty soon the mosh pit stahts up. It swihrls ’round fah r’a bit, kindah low-key, yah know, n’ then it just fuckin’ explodes once Týr stahts playin’ Blood of Heroes. N’ now Tyr can’t refrain anymoh r’n so he entahs the mosh pit now himself n’ so he’s in there now, chahgin’ ‘gainst all the othah guys, bouncin’ off ’em, wavin’ his stump ’round up in the aihr high above his bear skull hat n’ the whole damn time he’s still holdin’ ontah his fuckin’ bee’ah with his one good hand!

N’ then he climbs the stage tah do a stage dive n’ they catch him n’ all n’ evuhryone’s havin’ a good time n’ then the song ends n’ Týr stahts tah play The Lay of Our Love, which is one’ah their slower ballads so evuhryone calms down a bit. Evuhryone ’cept Tyr that is, as he tries tah keep the fuckin’ mosh goin’ but no one else wants it duhrin’ this sobahrin’ song’ah loss n’ death n’ so now it’s stahtin’ tah become a scene n’ the bouncahs ahr closin’ in on Tyr but he’s in total fuckin’ behrsehrkah mode n’ snahrlin’ like a fuckin’ beast. N’ well, Týr sees the drama unfoldin’ from up on stage n’ so the drummah throws one’ah his sticks at Tyr n’ it hits him squahre in the fuckin’ face n’ it stuns him ‘nough that fouhr’ah the bouncahs ahr able tah tackle him n’ then they drag him outside n’ they toss him n’ his animal pelt out ontah the fuckin’ street n’ then they go back inside.

So now Tyr stands up n’ he tries tah go back in but the doohrs ahr locked n’ aftah r’a bit’ah pointless commotion he calms his livah r’n realizes he’s too fuckin’ drunk tah drive home n’ so he calls Odin tah see if he can come n’ pick him up but Odin’s still stuck in Mimir’s cave since there’s a hohrde’ah pissed off goddesses waitin’ outside the place n’ evuhrytime Odin pokes his head out they all throw a bunch’ah rotten eggs n’ fuckin’ spee’ahs n’ shit at him. So now Tyr’s fohrced tah call Thor tah get a ride instead, which kindah pisses Thor off since he’s havin’ a rare quiet night off from killin’ trolls n’ shit n’, yah know, he’s just sittin’ there watchin’ Bridesmaids, which is one’ah his most fuckin’ favuhrite movies’ah all time since it’s one that he really relates to.

But anyway Thor goes n’ he gets his goats outtah the fuckin’ gahrage n’ then when he shows up in Woostah he can hee’ah Týr playin’ Hail to the Hammer inside the Palladium n’ even though Thor’s mohr of a Bee Gees n’ Ace of Base kindah guy himself that song just speaks straight tah his fuckin’ soul n’ so he rips off one’ah the outtah doohrs n’ he goes inside while Tyr sits down on the cuhrb n’ stahts pukin’ his fuckin’ brains out.

1 The Codex Bostonia’s anonymous poet’s assertion that Tyr is a metalhead has not been corroborated by any other authentic source of Norse mythology.

2 This is a reference to the most famous myth featuring Tyr in which he places his hand inside the maw of the evil wolf, Fenrir, as a gesture of good faith so that the gods may then trick the wolf and bind him. While most thoroughly documented in the portion of The Prose Edda known as Gylfaginning, the version of the myth found in The Impudent Edda states that Fenrir is now tied up somewhere on an island in Casco Bay near Portland, ME, slavering over a box of Milkbone dog treats that remain forever just beyond his reach.

3 Very little is known about how Tyr’s grandmother managed to grow 900 heads or at what rate she grew them, but the assertion here that she did not grow them all at once is an important new detail that expands upon the information provided by The Poetic Edda’s Hymiskviða.

4 Here, the anonymous poet utilizes a traditional Norse literary device that involves listing the names of a certain category of people, places, or things simply for the sake of listing them. A particularly well-known example is Dvergatal from Völuspá, in which a very large number of dwarves are named one by one.