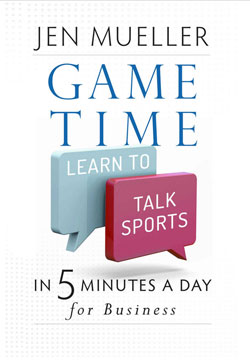 Under Review:
Game Time: Learn to Talk Sports
in 5 Minutes a Day for Business
by Jen Mueller
(2013, 53 pages, Talk Sporty to Me)

Up here in the Pacific Northwest one can frequently see today’s author, Jen Mueller, reporting with great pep from the sidelines of Mariners and Seahawks games.

On the one hand the role, the very concept of a sideline reporter—their main duty being the 30-second post-game interview, asking various iterations of “How do you feel?” to athletes still sweating and burning from the furnace of competition—is totally superfluous. But on the other hand: Mueller’s ascension to such a prime role in sports broadcasting, and in one of America’s most passionate sporting markets, is surely the end result of a personal triumph over a breed of back-room sexism that would make Will Ferrell’s Ron Burgundy blush. Oh no, it is not Ms. Mueller who is to be lampooned this day.

A few years ago Mueller started Talk Sporty To Me, a series of “professional development seminars” (this description from jenmuellerexperttalker.com) intended to teach business professionals the basics of following the sporting world so that they may not feel so lost when talking with their sports-loving associates. From this series of seminars comes today’s self-help book, Game Time, a self-published primer on how to keep tabs on sports happenings for a person who does not care about sports but works with people who do.

This book is for you, Mueller writes by way of introduction, if you answer in the affirmative to one or more of the following questions:

Are you looking to join in the water-cooler conversations at work? Are you trying to solicit business from a specific company or client? Are you hoping to become more comfortable in social situations?

Once you learn how to acquire tidbits from the sporting world, Game Time is here to help you integrate those headlines into one or more conversation styles:

You can be an active listener, a willing respondent, or the conversation driver.

Game Time even comes equipped with snippets of dialogue designed to replicate the sort of new, sporty conversation that you are now prepared to bring into your workplace:

I know you’re a baseball fan; how’s your team doing this year?

Did you see the offense in Toronto? Both teams hit the century mark. It was San Antonio coming out on top though.

The meat of Game Time is the tips and techniques that enable the enterprising professional to keep tabs on the sporting world in the promised “5 Minutes a Day.” Mueller basically advises a mindful sweep of the Yahoo! Headlines or something like that.

Now, me, I personally have no idea if Mueller’s minutes-long strategies can truly enable a person, a person who was previously oblivious/indifferent/apathetic about sports, to actually participate in real-life conversations powerful enough to, say, sign on a new client. I have no idea if the techniques work because I emerged from the womb and into this world with some genetic predisposition—and this is a trait that lay for the most part dormant in the generations before me—towards watching and observing and thinking about sports.

Don’t get me wrong, there are a few NJB1 All-Star Team appearances on my résumé—I haven’t always been on the sidelines. But by and large I have had a lifelong reflex to first watch sports, and then to learn and read as much information as possible about what I just watched. A bit of family lore: as a toddler, sitting in my car seat in the back while my mom drove around doing errands, I would read the box scores from the sports section, inducing whiplash-grade double-takes from nearby motorists at the sight of a four-year-old with his head in a newspaper, tiny arms outstretched to hold the pages.

Since I don’t even really remember doing this sort of thing, I definitely can’t explain my motivations for doing it. Why do I like sports? Well, why does anybody like music, or art, or flying remote-control airplanes? It feels like there should be a totally thorough and eloquent answer to those questions, but of course that answer would be mostly pretentious air. We like them because we like them.

My point in sharing this: even as somebody who is automatically interested in most things sporty, it’s like a total drag to maintain a face-to-face relationship with a person who talks about nothing but sports.

I remember in high school being trapped in something of the opposite of the conundrum facing Mueller’s Talk Sporty to Me clients: assigned a seat next to A. in history class, A. already knew I was a sports fan and would ask on the daily whether I had watched this game, or that game, or that game, or that game. A. had usually watched them all and was supremely eager to offer his opinions. After a few weeks I wished I could have feigned ignorance to get A. to stop talking, but there I was for the rest of the year.

While I talk about sports often with a good chunk of my close friends, they are my close friends because our relationship is built around a meaningful connection that is not sports.

So! Mueller’s book is terrifying to me—to be specific, the book is fine, it’s the societal need for Mueller to write this book that is terrifying to me. In my mind’s eye I see across this vast nation’s grid of office parks being patrolled by joyless figures like A., authority figures whose minds are entirely consumed by how to best re-jigger their fantasy lineups before that evening’s slate of games, all while being entirely incapable of seeing the people in front of them as actual, real people, with their own set of intriguing personalities and interests and pursuits.

The fact that Game Time is brand new and not a relic of decades past is all the indication one needs to confirm that our society is still more patriarchal and meatheaded than not. It’s a real shame that most people deeply interested in sports are so thoroughly blind to the people around them—there will obviously never be a sequel called Paint Time: Learn to Talk Impressionist History and Criticism in 5 Minutes a Day for Business.

I hope I have never been and never will be the type of person who only notices a fellow human being after they say “Didja see the offense in Toronto?” Of course this type of person exists, though. You probably know them, work with them. Work for them.

Please receive this olive branch, non-sporty readers: I am so sorry. I am so so sorry.

1 That would be National Junior Basketball, a.k.a. grade-school recreational league.