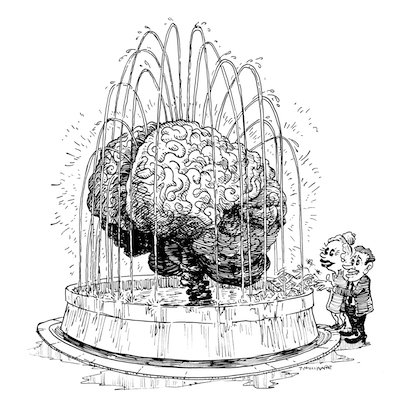 Mr. Stott, hello! And welcome to Million Dollar Ideation. Glad you could make it out. You’re something of a capitalist whale in this town, so don’t be surprised when I tell you we’ve spent the last week sharpening our harpoons.

Metaphorical harpoons, Mr. Stott! I know you got the fire rained down on you in ’Nam—in fact, that’s one of the reasons I’ve asked you here today—but just relax. No one’s going to hurt you. What’d you think of the fountain in the lobby?

You didn’t see it? A shame. We installed it after we sold our dessert lasagna prototype to Sbarro. We were like, dessert pizza? Old news. Dessert pasta? Bold move! Last quarter’s easiest sell. Anyway, the water shoots out from between the hemispheres of a big glowing brain, which is what we’re all about at MDI. Not just brainstorms. Brainstreams. I had Carol, that’s my assistant, laminate some large bills to chuck in, too, you know, because that’s how we roll here.

Let me tell you a little more about us, Mr. Stott. As you know, MDI is an idea factory. Every morning, we take our iPads and we snuggle our butts down into our water-beanbags—an MDI invention, waterbed meets beanbag—and we dream up things to make rich men like you richer.

Our business model is simple. We don’t want investors. We want you to buy from us, neat and clean. One idea costs one million dollars. Yes, Sbarro made a literal hash out of dessert lasagna because they weren’t willing to follow up on product testing. Yes, there were a few cases of terrible, foam-brown-at-the-mouth-type cinnamon poisoning in their Times Square flagship and in strip malls across America. But we wouldn’t have sold it to them if it wasn’t a million-dollar idea.

Mr. Stott, I scheduled this meeting because I’ve got some notions about how to leverage the Millennials and I think you—and you alone—may best appreciate them.

You’re lucky, Mr. Stott. Before you became the chief executive emeritus of the Midwest’s largest women’s sportswear corporation, you had the extreme privilege of fighting in Vietnam. The closest thing Generation Y has to shared suffering was the Matrix sequels. We’re starved for rites of passage; we’re soft and weak. Research indicates that every American under 38 is still functionally a child. And children need comfort.

Take my own case: I was exposed to Jurassic Park at an early age. I wasn’t ready. My dreams were—well, my dreams were all Jeff Goldblum, and very bad things happening to Jeff Goldblum, and Jeff Goldblum screaming about bad things happening to Ian Malcolm, which was Jeff Goldblum’s name in that terrifying gore fest of a movie. When I woke up, I’d run to my parents’ bed, and they’d explain everything away. I’ve since moved out to live with three roommates and our shared dog, but there’s no one there to comfort me when I wake to the terrified half-bleated speculations of a glossy-browed chaos theorist whose arm has just been chewed to bloody string cheese by a hyper-intelligent velociraptor.

What can we do about this?

We can start the Bad Dream Hotline. When 29-year-old Jenn dreams she’s in trouble for never once going to high school biology, even though she’s already graduated from college, she can call the Bad Dream Hotline. 1-900-THERE-THERE. We connect her with a levelheaded empty nester, who assures her everything’ll be all right for just $2.99 a minute.

Hang on. It gets better. The real profit here is in marketing intelligence. Imagine a whole generation of Americans pouring their darkest anxieties into your database. You could make, like, the statistically scariest haunted house. Or you could sell that information to, say, Facebook, a company with no ready access to that information.

You’re right, Mr. Stott, maybe we couldn’t pay someone to listen to our whining. Maybe it’s too late for us.

But maybe it’s not too late for our kids.

Children, Mr. Stott, children. We’ve all heard they’re our future. But, increasingly, they’re our present. We Millennials are generating an entire coddling industry around ourselves—and those of us who have already reproduced will stop at nothing to give our beloved offspring an edge. And that means you and I’ve got to keep going down this soft, silly road. We may not like it, but that’s where the money is.

I give you Apollo Programming: the first 24-hour channel for the gifted child, hosted by a pan-racial astronaut. The shows could be pretty much anything as long as we cut them with an occasional still of Einstein, like sticking his tongue out at the President. But ideally, we’ll have stimulating content approved by a blue-ribbon committee of child psychologists, tiger moms and present dads. The thing sells itself: non-stop TED Talks for the 0-10 set. And when I said “child psychologists” I meant psychologists for children, though I think I just came up with our tentpole series.

But maybe you don’t like the sound of William Stott, Kiddie Media Mogul. Well, take a look at this cute little guy. This is the last thing I have for you. I’ve been saving it. It’s a tiny vacuum for the little line of dirt that’s always left at the edge of the dust pan. You just attach—

No, Mr. Stott, wait! I—I didn’t know you were an early investor in the Roomba! Wait! We can build on that! Any parent knows the surface of a baby is surprisingly vast and difficult to keep clean. Place a robot vacuum-disc in the crib and it will crawl harmlessly over your baby’s every fold and membrane, sucking away all of infancy’s attendant debris and painlessly removing embarrassing body hair—

Mr. Stott! Come back! It’s called the Roombaby! Your connections can help us avoid a patent war—

Carol? Carol! Could you come in here, please. And bring the Crying Shoulder? Just bring it. It’s in the stem cell division. Carol? Or get my parents—or one of the There, There people on the line? Carol! Where are you? What is even the use of having a female employee, if not to provide a company’s fearless leader with sister-mother-wife-style empathy!

Wait, Carol, go get my iPad. I’ve just had an idea—we should put There, There on the Internet, like a subscription service, like a Google Hangout, and you can upload a picture of your mother’s face, and if we do it right it’ll just be a bot who knows how to answer, with her voice, and like, the picture’s eyes and mouth will move—and, damn, Carol! High fives. This guy’s worth at least two million dollars. Take the rest of the day off, why don’t ya. Skim a benjamin out of the fountain and go get yourself something nice.

Celebrate Earth Month with five issues of our National Magazine Award-winning Quarterly for the price of four.